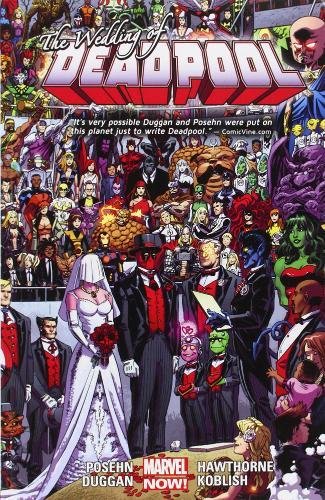 Deadpool’s been through quite the shredder over the previous two graphic novels, but the conclusion to Deadpool vs S.H.I.E.L.D. left him pretty much as he was to begin the series, except with some additional mental baggage. Even so, Deadpool getting married comes as a surprise. For starters, it’s no ordinary woman who can put up with Deadpool, and indeed, his bride to be is no ordinary woman. Let’s leave it at that. There have now been enough Marvel weddings that to label it strangely traditional is not a misnomer.

The wedding is followed by a selection of short stories by pretty well anyone responsible for more than a single Deadpool story in the past writing their own version of Deadpool’s previous weddings. They’re a mixed bunch, many of them revelling in the violence largely absent from the official event. Nico Henrichon’s art is an illustrative version of Deadpool, which is interesting, but if Gerry Duggan and Brian Posehn’s version of Deadpool is what you like, too many of these other versions will come across as stream of consciousness plotting. Hit and miss about covers it.

Scott Koblish (featured page) goes above and beyond the call of duty with a 236 character cover, and this collection also includes two of his faux Deadpool issues from the past. In one he almost marries a drunk Ms Marvel (it’s part of the wedding issue), and in the second a time-travelling Hitler arrives in 1954 to kill Nick Fury, still smarting about the damage the Howling Commandos did during World War II. Duggan and Posehn cleverly tie it into the opening tale of the previous volume, and it’s as hilariously nutty as all these faked ‘reprints’ have been. Koblish also draws the honeymoon story superbly, with Deadpool and new bride targeted by giant Pokemon style creatures in Tokyo. These are fantastic designs, with colourist Val Staples contributing greatly to the effect. It’s one long chase sequence, but superbly choreographed by Duggan and Posehn, and with the conclusion a brilliant segue into previous tragedy. This chapter is a highlight of the series to date.

We close with writing team Ben Acker and Ben Blacker providing an answer to what’s both the most asked question about Deadpool and the one that possibly least required an answer. Who’s the voice in his head that he’s constantly talking to? The good thing about Deadpool, however, is that if you don’t feel it needs an answer, pretty well any Deadpool story can be dismissed as a figment of his imagination. Evan Shaner gets to draw some top of the line characters in embarrassing situations, and he’s a constantly evolving artist, so while the art’s fine enough, it’s not as good as he’d later be. It falls short of the work by the regular team, but there’s enough entertainment to be had. Deadpool and wife continue into Original Sin. 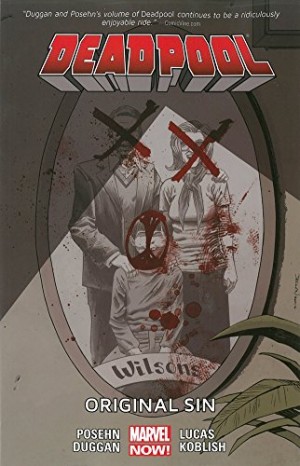 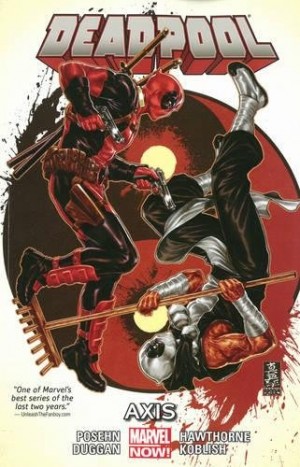 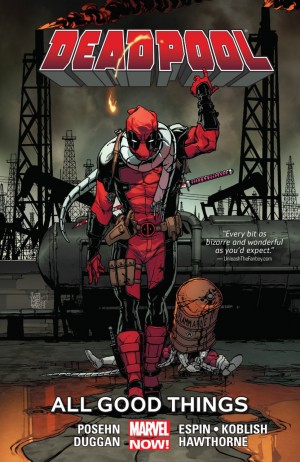