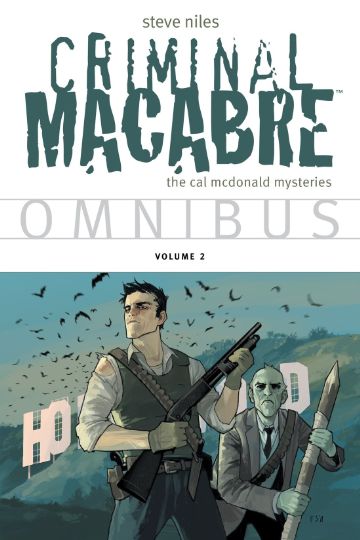 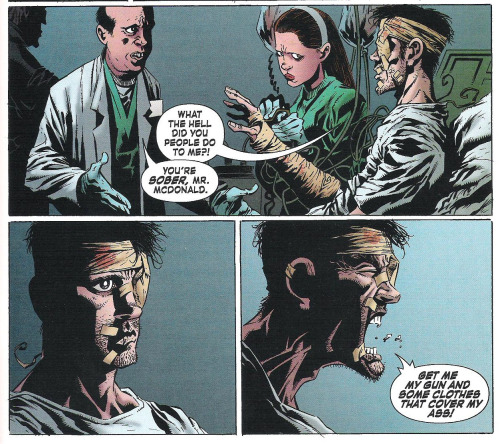 Everybody wants Cal McDonald dead, from the late Lieutenant Brueger’s husband Councilman Benson to half the world’s evil undead, never mind the undead residing in Los Angeles. Creator Steve Niles’ writing has a suitable noirish edge that makes it seem he really has it in for his character, except Criminal Macabre can also be laugh-out loud funny in the darkest and inappropriate way. This second omnibus collects among the best and most consistent work of the series so far including ‘Hairball’, an early outing originally printed in an anthology, and other one-shots from the series.

‘Hairball’ has Cal investigating why a client’s flatmates are acting very suspiciously. He pretends to be a friend but may have found more than he bargained for. Illustrated by Casey Jones in the 1990’s, the style is characteristic of the time with Cal looking more like a hard-boiled private eye, his drinking not the toll on him it would later be. Mo’lock also looks younger and far more enthusiastic than his future incarnations, less articulate but more chatty. It’s a decent story, not the best, but a good indicator of just how well Niles has developed his characters over the years.

Two Red Eyes follows directly from Supernatural Freak Machine, a more serious story with some outstandingly freaky and squeamish art from Kyle Hotz. Some of his sequences are jaw-dropping in their detail and creepy as hell. Hotz also illustrates three other short stories that more or less slot into the timeframe and events after Freak Machine. Some fit better than others, but they all work as standalone features. ‘Feat of Clay’ involves a Jewish legend constructed to execute vengeance that goes rogue, Cal called on to clear it up with some funny dialogue and interactions with Mo’lock. ‘The Creepy Tree’ is somewhat bleaker as Cal investigates an area in a national park where hikers mysteriously disappear, while ‘The Trouble with Brains’ revisits an old case involving a mind-manipulating alien entity. It’s the hardest to follow because of its link to the Cal McDonald pulp novellas and possibly the earlier comics. All are rendered by Hotz with great imagination, Niles timing the humour well. The only drawback is that by the time you get to My Demon Baby, the chronological time frame becomes vague as small details change frequently.

Nik Stakal takes over the artwork for My Demon Baby (a Catholic priest hires Cal to rescue a baby from a Satanic cult) and Cell Block 666 (Cal in prison thanks to a traitorous ghoul and Councilman Benson’s sordid connections). His loose style is similar to Ben Templesmith’s work in Criminal Macabre, but with more defined outlines to it. It fits the noir feel Niles is going for spectacularly well, and Stakal’s visual facility helps Mo’lock’s character develop further. He helps give the series some momentum again, with the best work in this collection.

As far as the series goes, Niles still keeps readers entertained with an engaging story that is generally well written and enjoyable because of a willingness to send up every horror cliché it relies on. It isn’t highbrow, but it is good fun. Crossovers with Niles’ 30 Days of Night and Eric Powell’s The Goon can be found with other books in the series in the Criminal Macabre Omnibus Volume 3.