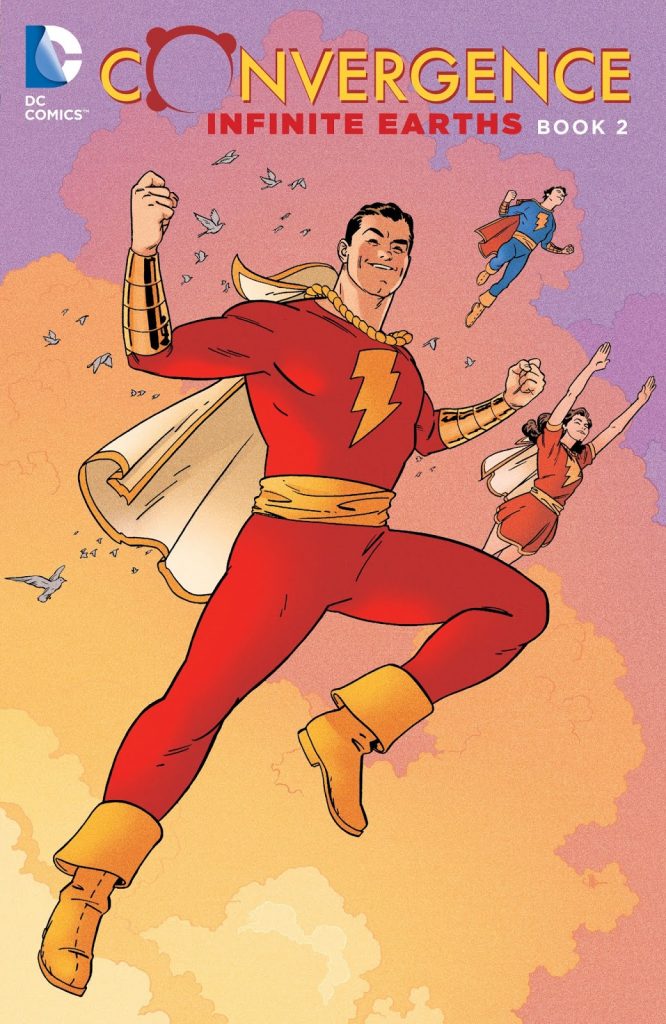 As in other Convergence tie-in graphic novels, heroes are trapped without their powers in cities sealed from the outside world by impenetrable domes. Only characters whose powers derive from their own training and athletic ability or technology are still able to operate, although in this selection that just applies to Blue Beetle and the Question, residents of Hub City.

Scott Lobdell’s plot adds Captain Atom, but not very convincingly, presenting the type of military officer who brings a troop of armoured soldiers with rocket launchers to a knife fight and considers information in the hands of civilians to be unsafe. He’s a caricature rather than a credible public protector. Lobdell’s far better defining Blue Beetle, several of the surprises generated by the application of technology in the face of overwhelming odds. Yishan Li’s figures are stiff and sometimes not quite right, but she uses space well, has a gorgeous thin line and a surplus of talent.

As Dan Jurgens created Booster Gold he should know better than any other writer how to make him work, but makes the opening pages confusing and inaccessible in a frustrating way, not inducing the desire to work out the puzzle. Alvaro Martinez packs in the action, but it’s only when Booster is reunited with Blue Beetle that the desired nostalgic glow materialises. Of all the stories in the Convergence tie-ins, this is the only one to avoid the compulsion for the heroes of one city to battle others for survival, and the only one where the back of the book notes about the character are required reading.

Evan “Doc” Shaner draws a gorgeous version of Fawcett City and its inhabitants, simple, yet very expressive and pitched just right for Shazam and company. Jeff Parker’s clever plot supplies the required innocent tone for the feature, unites most of the villains expected, and takes everything to another level when introducing the anomalous characters. The heroes of each trapped city at some stage have to face those of another world, and those introduced here require a completely different look, but Shaner incorporates them naturally.

The only Convergence tie-in to feature villains as the lead characters is Brian Buccellato’s look at the Crime Syndicate, alternate world equivalents of the Justice League. How are they going to be treated in a world they dominate if their powers are removed? Buccellato keeps throwing in twists into what’s very nicely drawn by Phil Winslade, mimicking the styles of different eras.

Simon Oliver and John McCrea close the collection with Plastic Man and the Freedom Fighters, the only heroes left in a world where the Nazis won World War II. Except without their powers they’re in jail and due to be executed as the story starts. Oliver has Plastic Man narrate the past and McCrea’s enthusiasm takes things a long way, excelling with the gloopy mechanical mess that appears, but both creators are losing interest by the final quarter, which is a shame, because this began well.

Still, that’s three and a half good stories from five, which is a decent return. Companion pairs of graphic novels are titled Convergence: Crisis, Convergence: Flashpoint, and Convergence: Zero Hour.