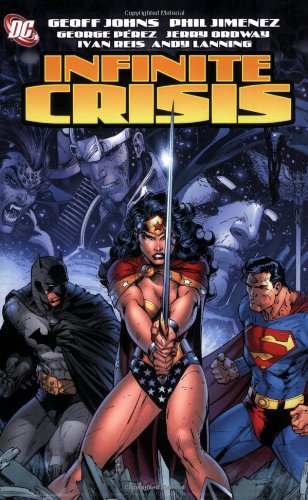 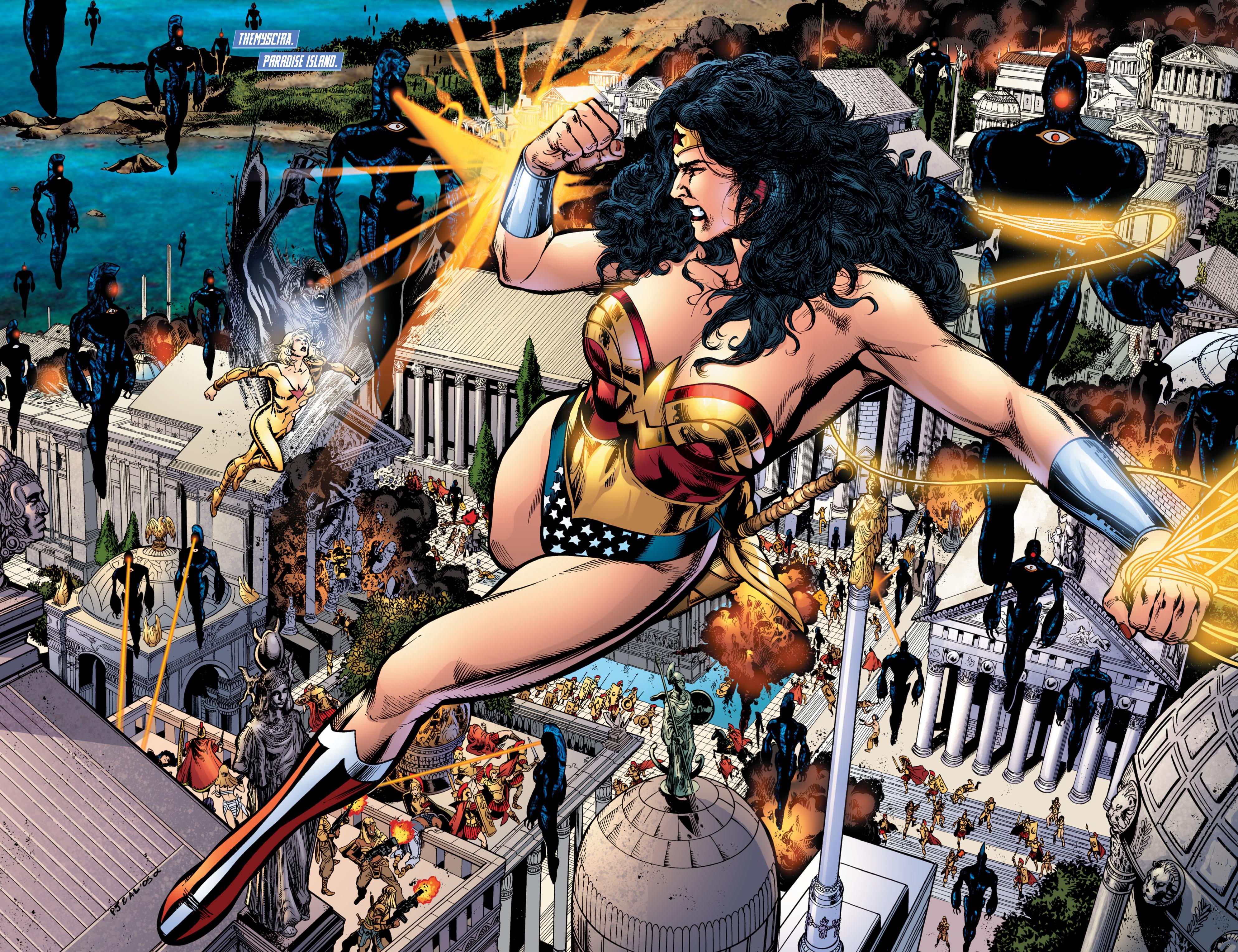 In the mid-1980s DC’s editorial department came to the conclusion that their continuity required simplifying, and readers would be more likely to pick up DC titles if all events occurred on a single world rather than on several alternate Earths. Crisis on Infinite Earths duly compressed the variety of worlds into one with a single continuity, and remains readable. If only the same applied to Infinite Crisis from twenty years later.

DC laid extensive groundwork for Infinite Crisis prior to its original publication, most prominently via showing DC’s villains becoming organised, and Batman’s creation of a satellite observation system he christened Brother Eye. He lost control of it, and a now sentient Brother Eye is transforming ordinary humans into cyborg constructions able to take down superheroes. As the series starts the Justice League has disintegrated and video footage of Wonder Woman murdering Maxwell Lord have been broadcast around the world.

The most immediately obvious comparison between the two series is that Phil Jiminez starts drawing Infinite Crisis in his best George Pérez style. It’s all very competent, and Jiminez has mastered the spectacular composition, but was Pérez unavailable for the entire series? He contributes later, as does Ivan Reis, then Joe Bennett, but there’s some extraordinarily sloppy artwork in the final chapter. This has been re-worked for the oversize hardcover Omnibus edition.

Geoff Johns’ opening chapter jumps hither and yon, but his primary purpose is to accentuate the schism between Justice League members Batman, Superman and Wonder Woman, and to establish that, essentially, the universe is out of whack. Much is due to beings last seen trapped beyond Earth’s dimension, and their decision that a better universe is required. If it results in the destruction of what they consider the polluted DC universe, than so be it.

Distanced by time, and read in isolation, the opening half of the book is at times almost incoherent as it reprises events occurring in other contemporary titles, and fails to explain significant story elements. Why Wonder Woman would kill Maxwell Lord, for instance. A continual narrative eventually coalesces from the midway point, when Infinite Crisis becomes a decent superhero comic with its themes of what constitutes a hero, and the vexing question of where to set the line that cannot be crossed, even with a misguided belief it’s for the greater good.

This isn’t the series to read without a thorough grounding in DC’s characters. Those familiar with them will mourn those who don’t survive, and possibly welcome the new additions, including a re-worked Blue Beetle and a new Spectre. They’ll also appreciate the many cameos Johns drops into the later issues, referring to DC’s rich history, and there are some fine concluding segments.

However, as was the case with Crisis on Infinite Earths, a few loose threads dangled and subsequent writers couldn’t resist tugging at them. This was rapidly over-written by Final Crisis, and then the New 52 rewrote everything once again. It’s only ten years since the original publication, but Infinite Crisis is already a redundant timepiece, and without a strong story to ground it, it’s surely no-one’s essential purchase.

Oh, and they may share the same name and heroes, but there’s otherwise little connection with the computer game.