Zombo Volume 1: Can I Eat You, Please? 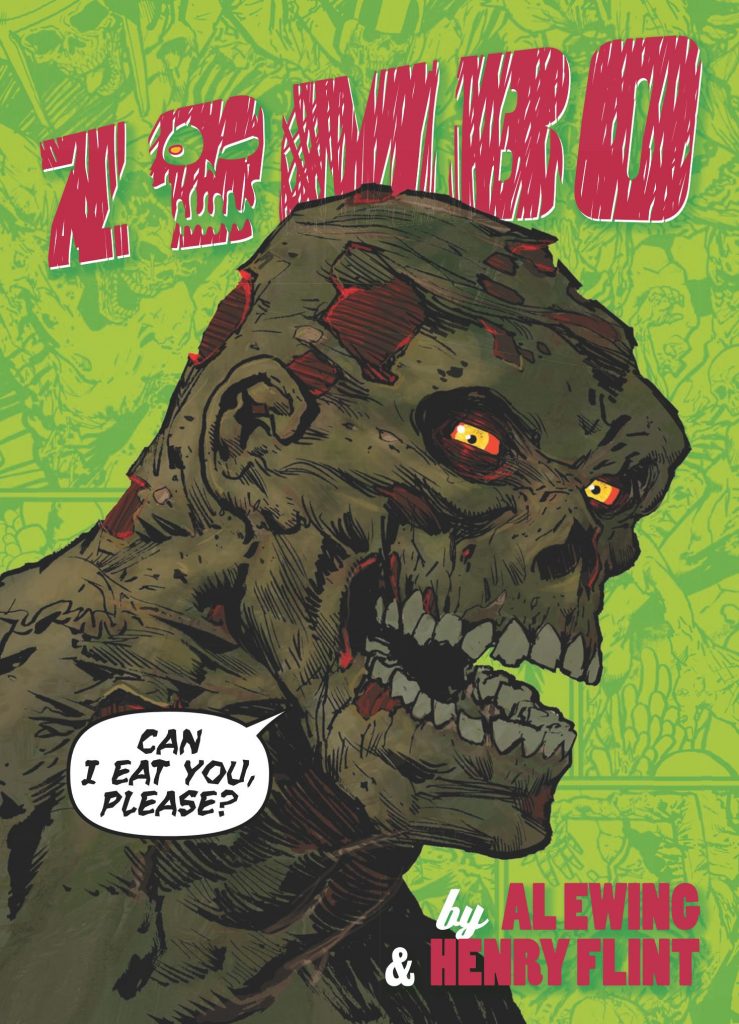 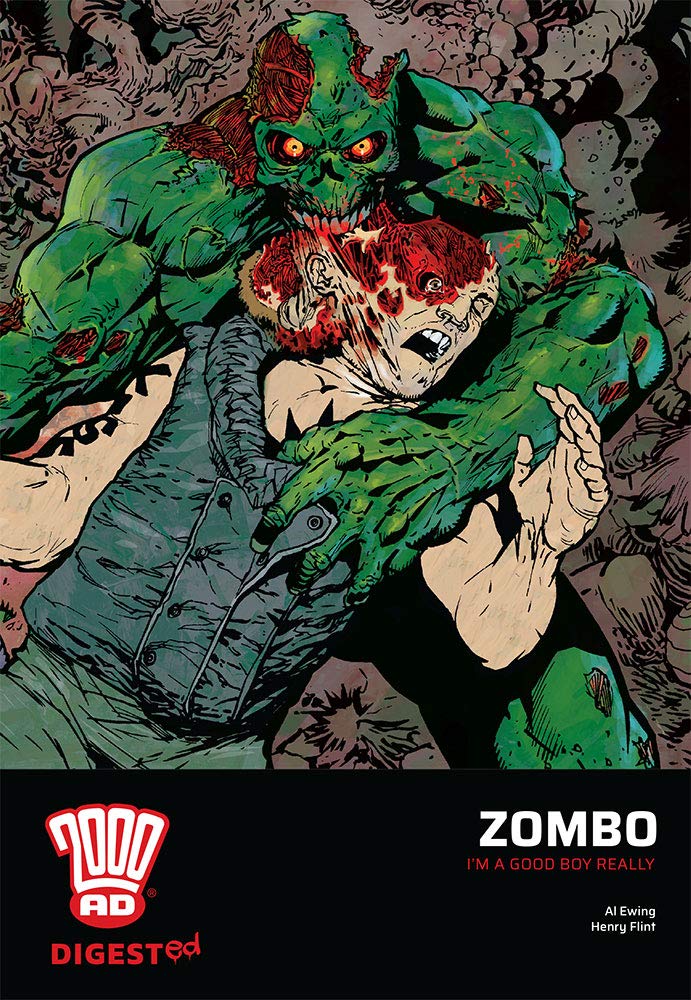 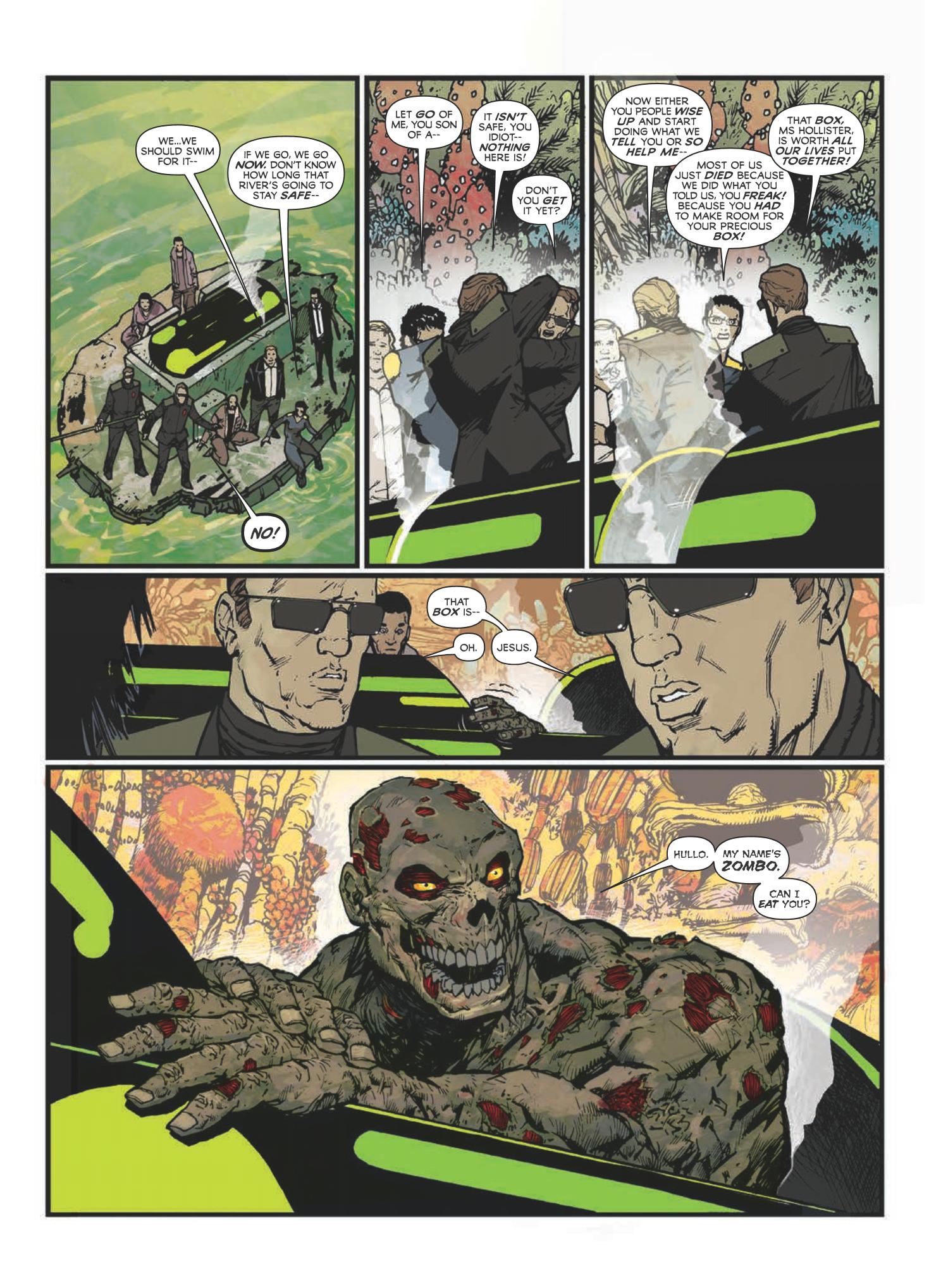 In the future you’ll be able to book flights on government cargo planes. The prices are cheap, but you don’t know what’s being carried in the hold, and what will be prioritised in the case of an emergency. It could be Zombo in both cases. On the other hand, should the plane crash on a desolate planet where all flora and fauna endanger human life, Zombo and his cheery greeting of “Can I eat you?” are just what’s needed.

Zombo succeeds on so many levels, Al Ewing and Henry Flint working together to create what’s either a funny story with profoundly disturbing moments or a disturbing story with profoundly funny moments. It’ll depend on your sense of humour. It’s certainly something meandering in from left field, yet also a structured adventure with several moments of conceptual innovation that have no great bearing on the main plot, but which provide a depth. Zombo himself is a zombie who hungers for human flesh, but a speaking and walking variety as opposed to the grunting and shambling specimen. He’s actually very polite, and cuts a dashing streak in his bright red codpiece, although as far as we know he’s not Larry Blackmon. Or if he is, it’s not yet been revealed.

Flint makes the most of that codpiece’s vivid red colouring on Zombo’s rotting green body, and also relishes a story where he can dispose of the cast in inventively horrific ways. That’s only the starting point, though, and after finding their feet during the first story Ewing and Flint decide what’s needed is not only more violence, but an injection of pop culture parody. The nearest in tone from 2000AD’s back catalogue would be the structured insanity of D.R. and Quinch.

Following a Christmas telethon we have ‘Zombo’s Eleven’, which is still set on the death planet, but cycles through numerous nods to cinema as a group of suicide junkies strive to increase their online profile. It mixes Marlon Brando, with a caper robbery, fast-talking thugs and the filming of a TV talent show, with only Zombo not pleased: “I’m not waiting around on some poxy death planet while all my fans kill themselves off”. Astoundingly, Ewing and Flint keep everything under control as things become nuttier and nuttier, adding more zombies and ensuring that what just seemed to be whimsical inclusions actually have later significance. It’s fantastically inventive, and you know what? You Smell of Crime and I’m the Deodorant is even better.

In addition to the pin-ups, fake ads and covers that accompanied Zombo’s original appearances, the book closes down quietly as the creators discuss their influences. In 2019 these stories were re-released in digest format as Zombo: I’m a Good Boy Really, or both this and the next collection are combined in hardcover as the Zombo volume of Hachette’s 2000AD partwork. 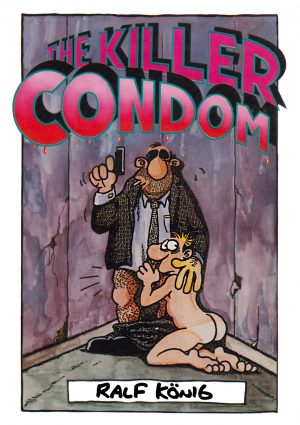 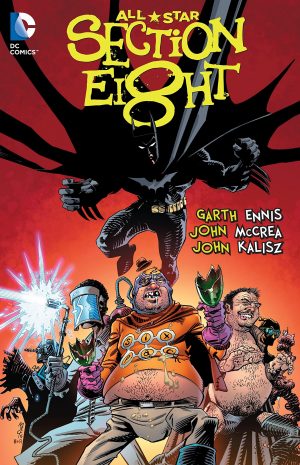