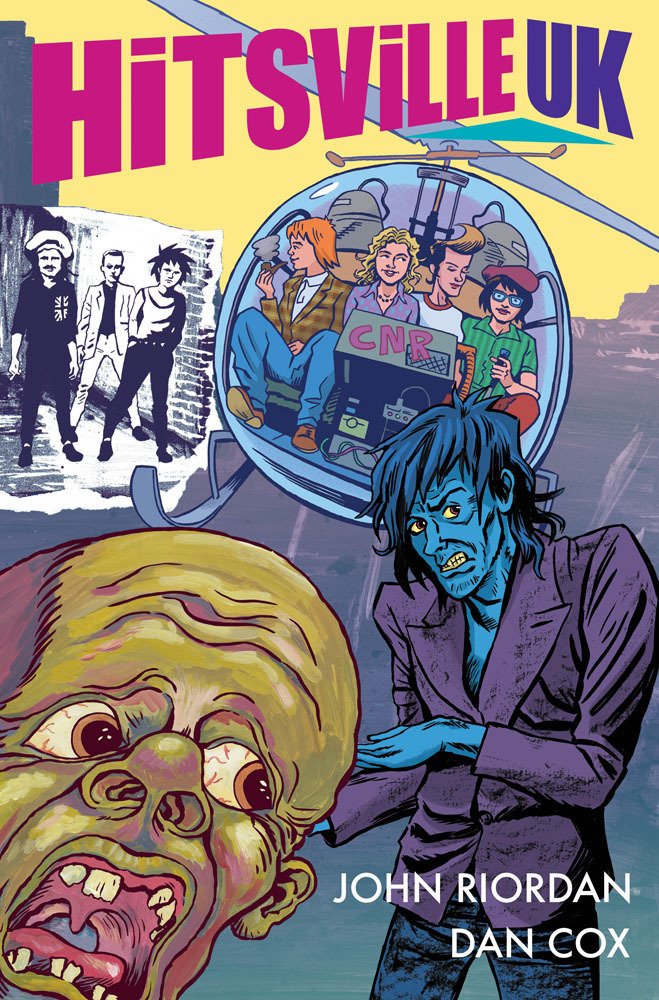 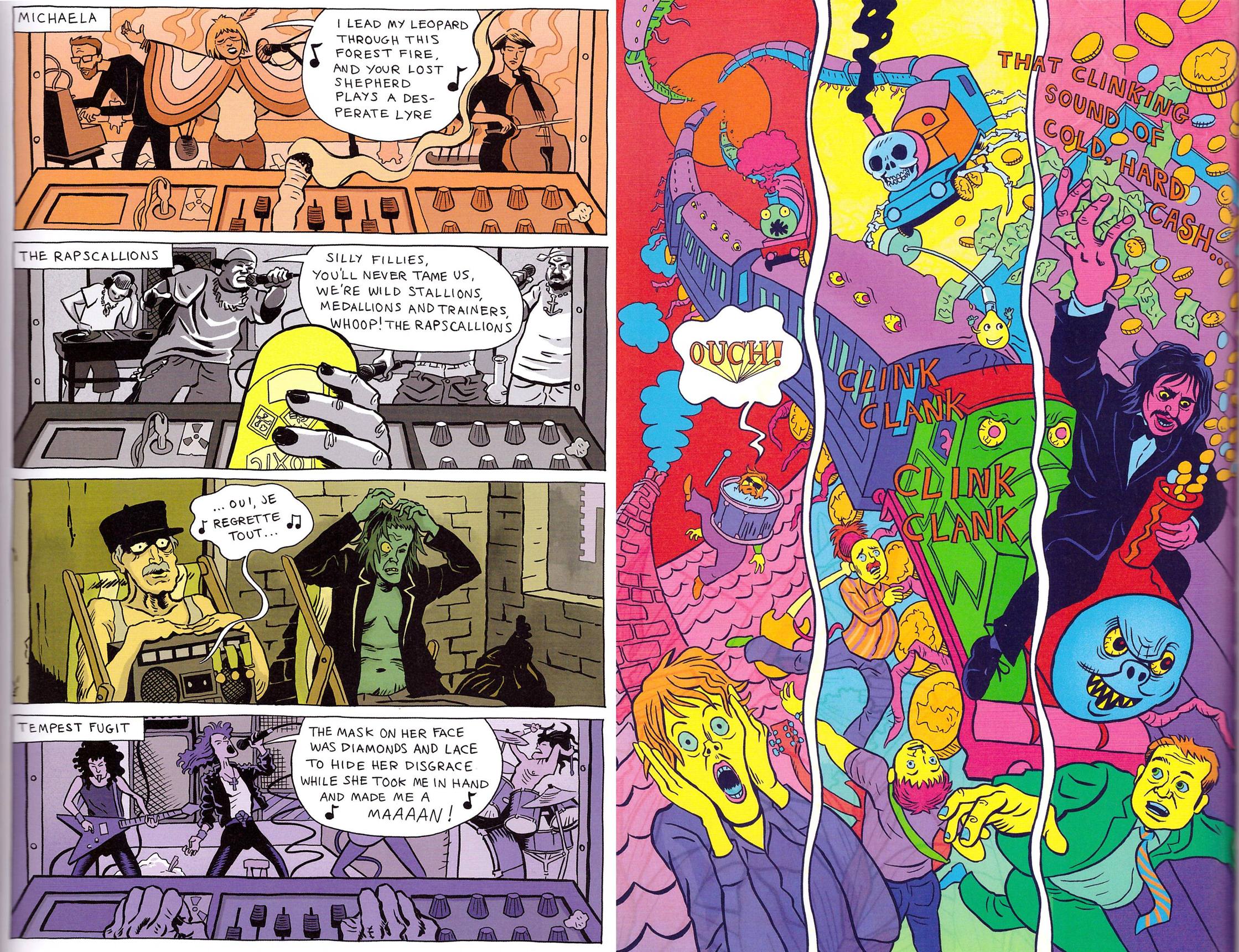 Gerry Corden runs the Hitsville UK record label. He’s desperate for it to be hip and influential, but isn’t sure what that involves, the result being that there’s no central vision, just cross-cultural genre mashing. At first it seems much the same applies to Hitsville UK the graphic novel.

The idea-packed opening chapters have some great lines, a love of the obscure musical reference and a wealth of fascinating characters, but cry out for some focus. The reader is never sure what’s meant to be taken at face value, or what might be allegorical, or hallucinogenic. On the other hand in the midst of confusion the writing partnership of John Riordan and Dan Cox will throw in smart gem after smart gem, such as referencing a song titled Instant Korma or a band called Curious Orang-Utan, or noting the new genres of Spiv-Hop and Tech-Fop. It’s dense scattershot comedy with moments of creative genius. Is the label accountant possibly Satan, scrabbling to get those contracts signed? The pages are full of such nutso brilliance.

It’s one thing just dropping names, but the art’s equally evocative. The credits are muddied, but that seems to be Riordan alone. Whoever’s responsible, or indeed irresponsible, it’s just as energetic and crazed as the plot, and also prone to dropping musical references. The Joy Division closer’s just so perfect for the moment.

Those opening chapters introduce the wildly eclectic acts that hang around Hitsville, almost all recognisable types from Gwillum, the singer/songwriter too sensitive for the world, to Haunted by Robots, the schoolboy, doom-purveying nihilist. Any missing archetypes are covered in single panel gig visits (see sample art) or tryouts, their lyrics as hilarious pastiche, the ghost of Ian Dury hovering throughout. The main acts are followed in short segments, dropping back in on them every now and then. The experience is like reading an issue of Viz, but without the title logos on each strip. They hold political opinions, have psychedelic experiences, prioritise image over content, or fight among each other, but the results can be frenetically funny.

It’s perhaps obvious that Hitsville UK carries an important caveat, which is that not everyone will get it. The ramble to the crossroads is accompanied by the joy of the clever verbal and visual references, pastiched lyrics, titles and rock iconography, and anyone not into their music will miss much. Riordan and Cox aren’t elitist either. The Fall and Primal Scream are referenced, but only relentlessly irredeemable manufactured music is scorned, so John Lennon’s psychic presence quotes Chris DeBurgh (among others). A linking plot finally swerves into view as Cordon promotes five gigs in five venues on the single day, something we already know has a deeper purpose. The chaos that’s frequently ensued already is ramped up to new levels.

No-one other than Riordan and Cox will make complete sense of Hitsville UK, but they’ve cried the tears and shed the fears to spread the joy up and down the land, and that’s appreciated. This doesn’t always make sense, but much should click into place intimately if you loved Deadline back in the day.

Unfortunately, coming by the collection is difficult. It’s not available on any major online book service, so you’ve got to hope your local comic shop or indie music store stocks it. Rough Trade online does, although you could try the Hitsville UK website, but that’s rather haphazard.