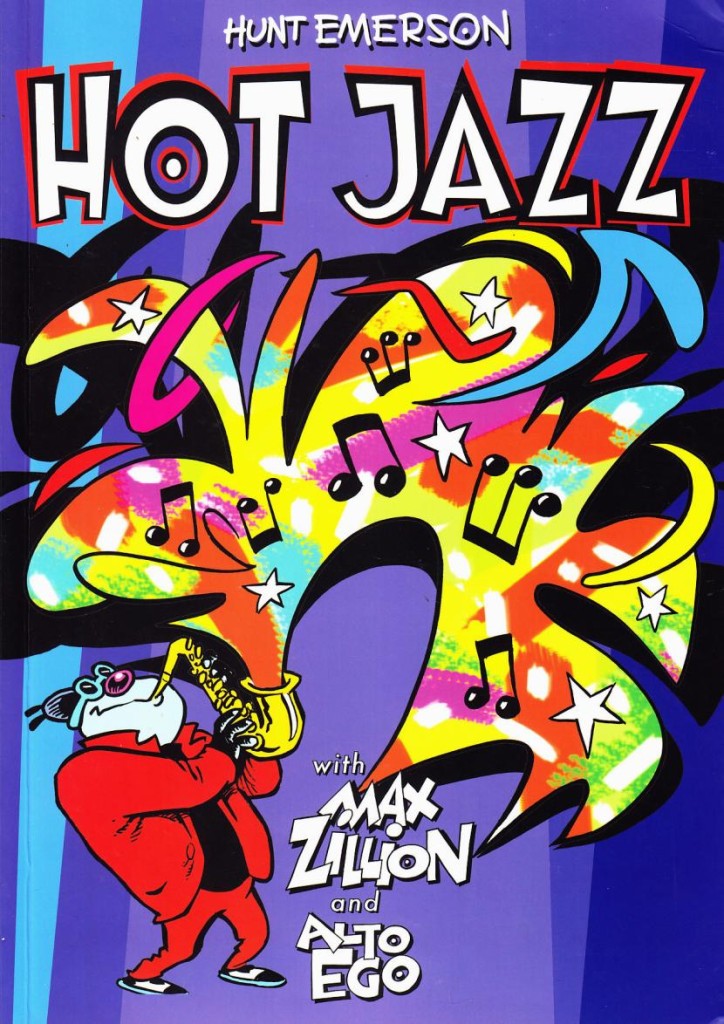 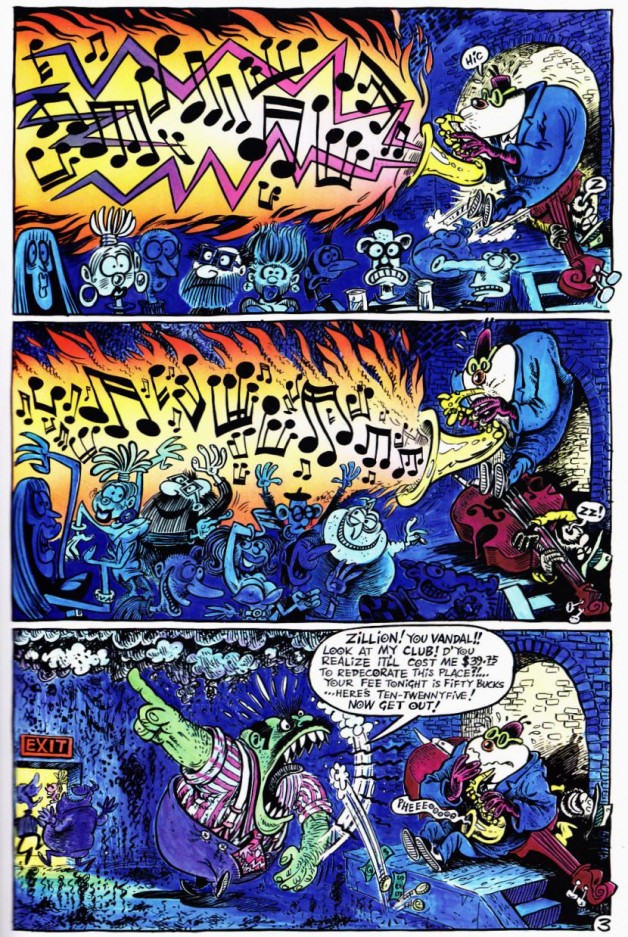 Reading Hunt Emerson’s Hot Jazz for the first time is a surreal experience. Jazz as a theme!? Seriously!? Yet you are drawn into Emerson’s world, captivated by his eye for detail, subtle social commentary, vibrant artistry, and anarchic but captivating storytelling that after a while you’re considering listening to more jazz after all.

Originally started by Emerson in the mid 1970s, and collected in Jazz Funnies in 1986, these fusions of drama and comedic satire centre around jazz saxophonist Max Zillion and his anthropomorphic sax, Alto Ego. Max is a musician looking for his big break but forced to play middling gigs for crooked lizard Meen McMudda, usually against the advice of Alto, the brains of the outfit. Max loves jazz and riffing on Alto, much to the distaste of purist jazz critics, Meen McMudda, and everybody else, inevitably leading to Max being down on his luck, penniless, and soulfully playing blues into the horizon. There are all sorts of adventures featuring thugs, bouncers, tough gigs, kamikaze seagulls, and even the devil himself. Hot Jazz is the result of Emerson’s Kickstarter campaign in 2015 to re-print Jazz Funnies, including newer Max Zillion material, as well as other strips printed by various other publishers throughout Europe and the USA, spanning over a period of 30 years. Most strips are in black and white but some are in sumptuous colour, that by no means diminishes the artwork.

Emerson is an outstanding cartoonist, the central and background art all detailed and energetic. Characters come in all shapes and sizes, from the outright grotesque (‘Eat Dat Chicken’), to the strangely beautiful (‘Spellbound’), and even a little scary (‘Hell on Earth’). Emerson is also a master at conveying exactly what he means with little dialogue. ‘Original Hot Jazz’ is but one example, notable above the others like it only because of its greater length.

While the underground comix scene was known during its day for pushing the boundaries of taste, spiced with lashings of blatant socio-political satire, Emerson’s work (still fairly mature), featured a much more subtle social commentary expressed through his characters. It’s only in ‘Hell on Earth’ that we ever see his political and sociological opinions clearly expressed, and even then Emerson felt that he had gone far enough to burn his fingers on the attempt. These scenes of deforestation, violence, racism, war, and overbearing politicians, laid out in black and white, are equal parts shocking and funny while still contextually relevant even today.

There are a number of extras to Hot Jazz. The standard features include Emerson’s notes on each story, artwork featuring Max and Alto (including a Christmas card) by Emerson, plus a gallery of jazz related art by 48 different contributing artists from across the globe. The styles and techniques are diverse, the sizes ranging from a full page to a small frame. Most are tributes to Max and Alto, reflecting the obvious but understated influence that Emerson has had on illustration artists over the last three decades. Kickstarter campaign supporters received the De-Luxe Book: a linen-bound, hard back with silver foil lettering and graphics, signed by Hunt Emerson.

In many ways Hot Jazz might be considered an archive of a very notable contribution to the British and European comix scene. Not to everyone’s taste, but certainly encapsulating a time when creativity was more than just entertainment for the masses, but a voice  with which to convey all manner of ideas and opinions that is inspiring other people to find their own.