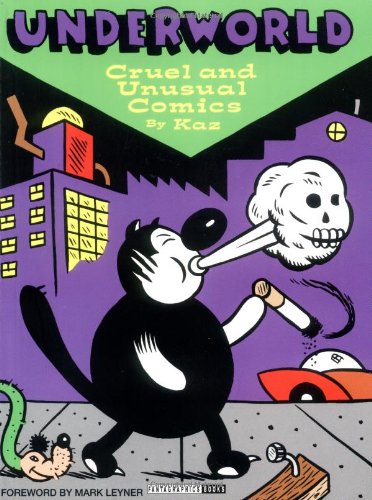 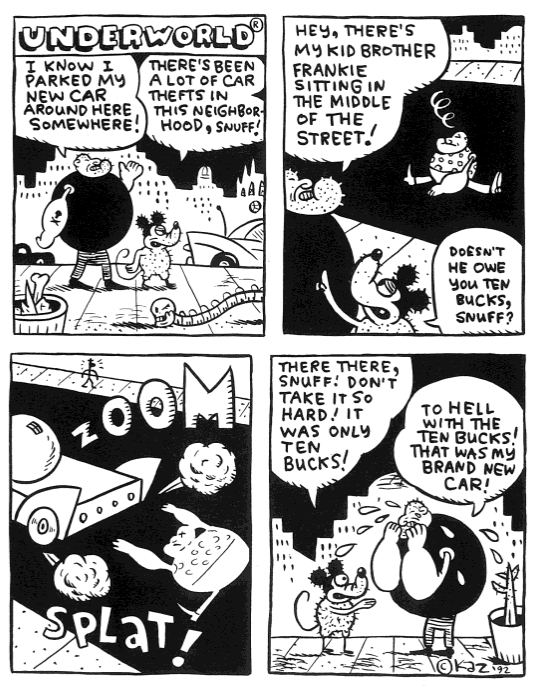 The cover describes Underworld as “Cruel and Unusual Comics by Kaz”. That’s a fair description, but belies the underlying empathy for these troubled characters.

Kaz first became known for his entertainingly formalist pieces in Raw magazine, later collected in Buzzbomb. Comparing him to other artists from Raw, he has the wonky bad-but-good drawing of Gary Panter, buffed up with precision inking closer to Charles Burns.

Formally, Underworld is in the classic four-panel newspaper strip format, and was syndicated to alternative weekly papers in the US. It’s painlessly reformatted here for a small portrait-format book. The content though, is a complete negation of what people might expect from a humour strip

It has a cast of characters that seem like dark versions of classic comic characters. Creep Rat has ears like Mickey Mouse, with a long upturned nose, permanent stubble, and a body like a poorly plucked oven-ready turkey, with sticking plasters as a fashion accessory. Newton is a docile, huge guy with a tiny head. Aunt Betty also has a tiny head but with a large hair-bun and Popeye chin. Her massive chest tapers down to tiny feet.

Yet these these are recognisably human characters, if generally damaged and destructive. They’re drinking and smoking too much, seeking respite from partners, considering ending it. Yet usually they’re searching for something, whether it’s companionship, respite, or just another hit.

Kaz was born in Hoboken, New Jersey, just across the Hudson River from Manhattan, but a very different place. It was a port and industrial city, but in sharp decline when Kaz was growing up. Its Wikipedia entry quotes “heaps of long uncollected garbage, and packs of roving semi-wild dogs“, and it’s River Street was nicknamed ‘the Barbary Coast’. So maybe that offers some explanation for the worldview here.

The back of the book, deadpan, beside the ISBN number, categorises it as ‘Gallows Humour’. That’s sometimes literally true. A glamourous woman sits in a run down room. There’s a hanging noose. She ponders it, drips of sweat on her face. She looks at it in a hand-held mirror. There’s two grim reapers on a stake-out, one with binoculars: “She’s making her move!“ The other stubs his cigarette in an overflowing ashtray: “All right grab your sickle… we’re going in!” Dark, yes, but he comically punctures the bleakness.

Pinky Pig and Drafty Duck are like Warner Bros cartoons doing Itchy and Scratchy from The Simpsons. It’s cartoon violence deliberately taken too far. Pinky goes to see Doctor Drafty complaining his stomach hurts. Drafty cuts him wide open and says “There’s the problem… you had apparently swallowed all this squishy red stuff! Yick!“ As he holds up all his severed innards.

A rough looking Man asks his ventriloquist dummy: “Well Glibby, how are we doing?” Only in Underworld would you get the reply: “‘We have no woman, no friends, and will die a lonely bitter old alcoholic… …and to top it all off” [Shot of outside the house with Glibby dumped on a garbage can]: “I saw your lips move!”

Smoking Cat, as on the cover, is like a rotund Felix, and you guessed it, he’s never without a cigarette. In one episode he coughs his lungs up. Literally. The lungs beg a cigarette and cat sits beside them on the kerb puffing. Cat – “I can’t get a drag off this!” Lungs – “Maybe you should switch to non-filtered!” Companionship. It’s touching.

It looks like Kaz is having fun here. It’s not for the faint-hearted, but it’s a well-realised world with a sharp ironic wit.