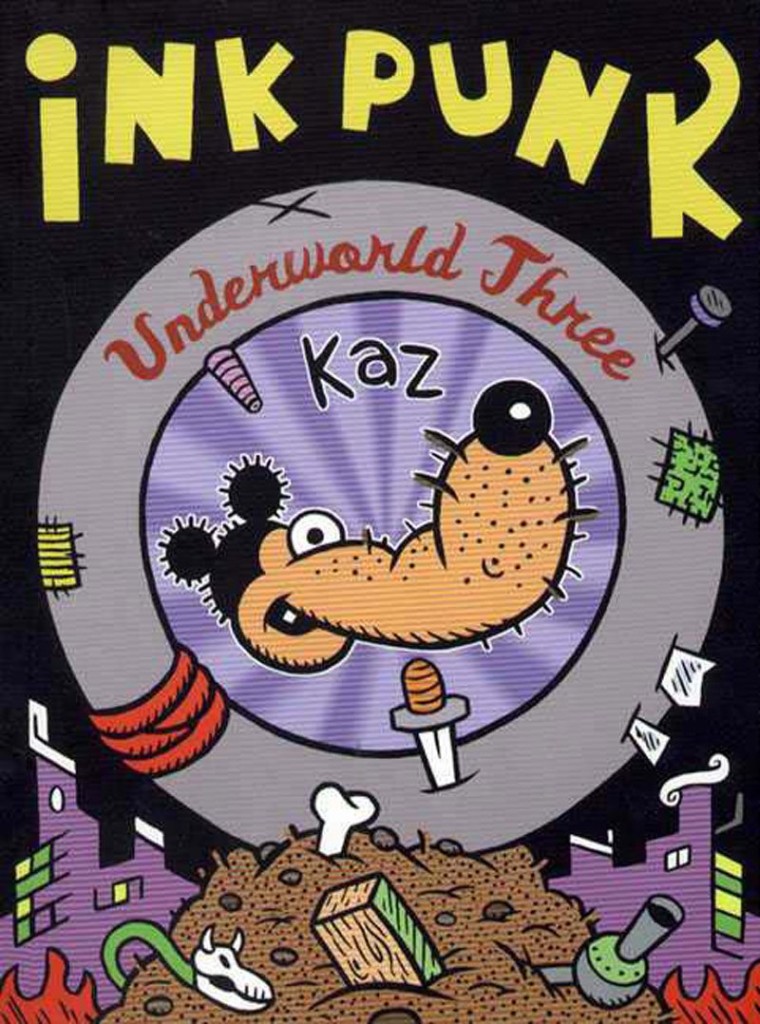 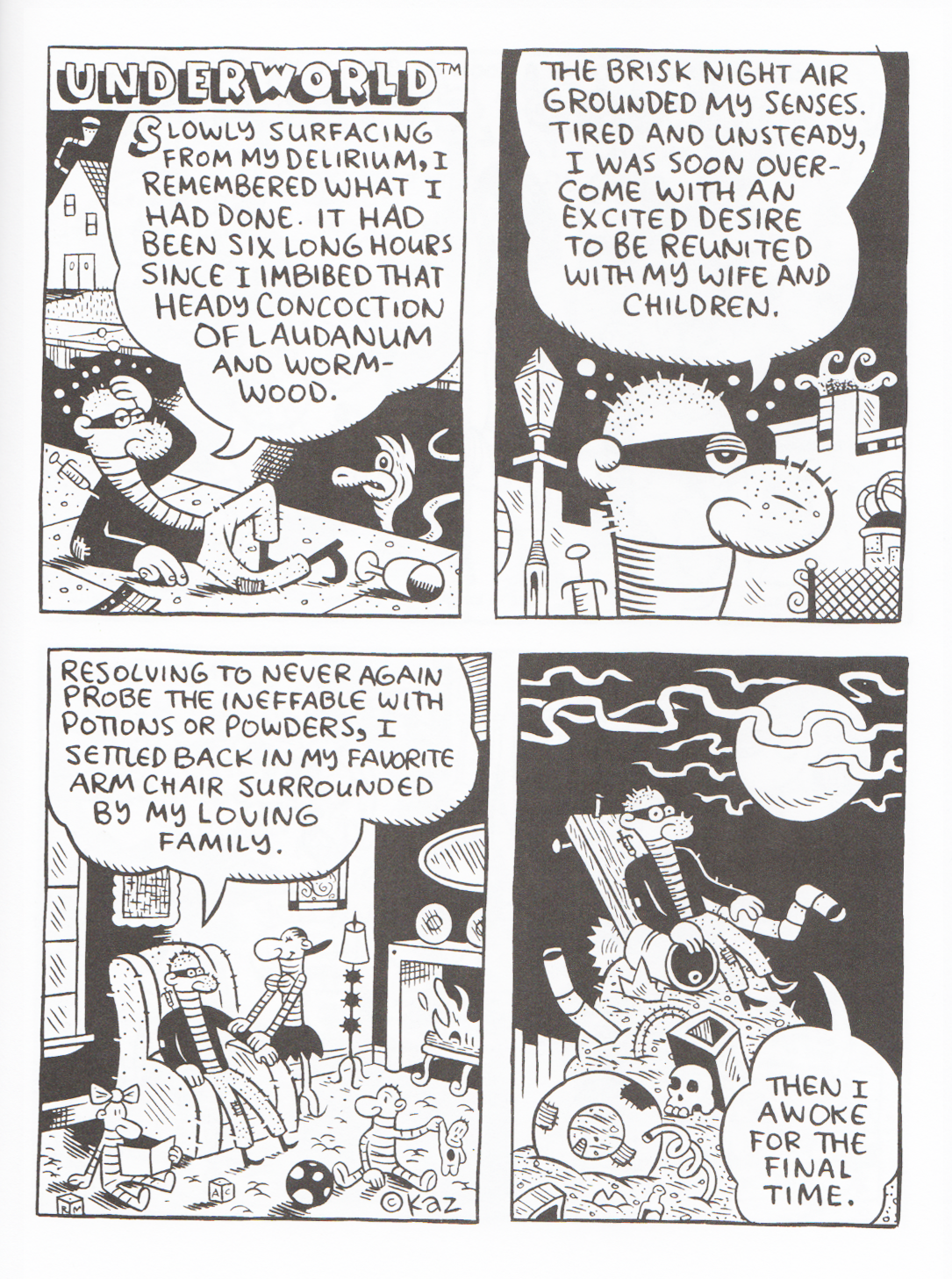 Ink Punk is the third of Fantagraphics’ little paperback collections of Underworld by Kaz, containing around two years worth of his hilariously twisted take on classic newspaper strips.

Like the previous Bare Bulbs, Ink Punk is a wittily apt title. Although inspired by the taboo-breaking of 1960s underground ‘comix’, his sardonic attitude and deliberate roughness owe more to the later punk movement. We know punk music, but what is punk art? Wikipedia tells us it: “[Uses] images of suffering to shock and create feelings of empathy in the viewer… [and] images of selfishness, stupidity or apathy to provoke contempt”. You’ll find all this in Underworld, but thoroughly mixed up, and rarely provoking a simple response.

There’s no continuing storyline here, but characters and themes recur, including, another punk staple, economic disparity. Underworld is clearly on the wrong end of that – the characters here go to extreme lengths just to scrape a living. In one strip the four panels show a series of people with escalating pitches to ‘attract’ money: “I am homeless”, says the first, “I am blind”, “I am a vet”, and finally, “I have a gun”. In another example, a one-legged man complains, “It’s getting harder and harder… to panhandle these days.” We see him progressively divested of body parts until he’s just an eyeball on the ground beside a tin cup, “Maybe” he muses, “if I cry”. Underworld is surely inspired by Kaz’ own formative years in post-industrial Hoboken, New Jersey, and he clearly has empathy for these initially unappealing characters. What we’re seeing here is evolution – they’ve adapted to survive in a hostile environment. Wouldn’t you?

The gritty realism Alan Moore and others applied to superheroes, is here applied to cute and ‘funny’ cartoons. Take Pinky Pig and Drafty Duck – they’re Warner Brothers rejects, burnt-out by cartoon realities. Here Pinky plays doctor and Drafty a traumatised patient: “I swallowed dynamite, the anvils are falling, careful with that mallet, the mice are dancing!”.

Yes, amongst the tragic humour there’s poetry – Goethe’s angst-ridden Young Werther, and self-styled opium eater Thomas de Quincey, live on here in Nuzzle (sample image). “I walk these streets in a thick black fog of booze, narcotics and blood-splashed hallucinations of carnage and genocide”. He’s the addict laureate of Underworld. Just when we think we’ve got a handle on him, he returns, dreaming of cute anthropomorphic creatures. “Nuzzle Sweetie, ” they say, ”Hello Honey!”, “We love you,” they continue, ”Be warm and fuzzy”. They disappear and Nuzzle opens his eyes: “The demons,” he declares, “have ceased”.

There’s plenty of dumb humour too. The first volume introduced us to the self-explanatory Smoking Cat, and we saw him (literally) coughing his lungs up. Here it happens again and again. “It’s a good thing,” he explains, “Cats have nine lungs.”

This variety and unpredictability is Underworld’s greatest strength – when we think we know what to expect Kaz blindsides us – the joke is usually, cheekily, on the reader. It’s a testament to his craft how much he can misdirect, dizzy, and surprise us with a mere four panels. Behind these glimpses, there’s a well realised cast of characters, indeed a whole eco-system, that sadly is closer to the real world than we’d like to think.

The vicar probably doesn’t want this for Christmas. It’s shocking and often sordid – the examples given are the more family-friendly ones. If you can look past that, you’ll see it’s also tragic, poignant, poetic, surreal, and very, very funny.