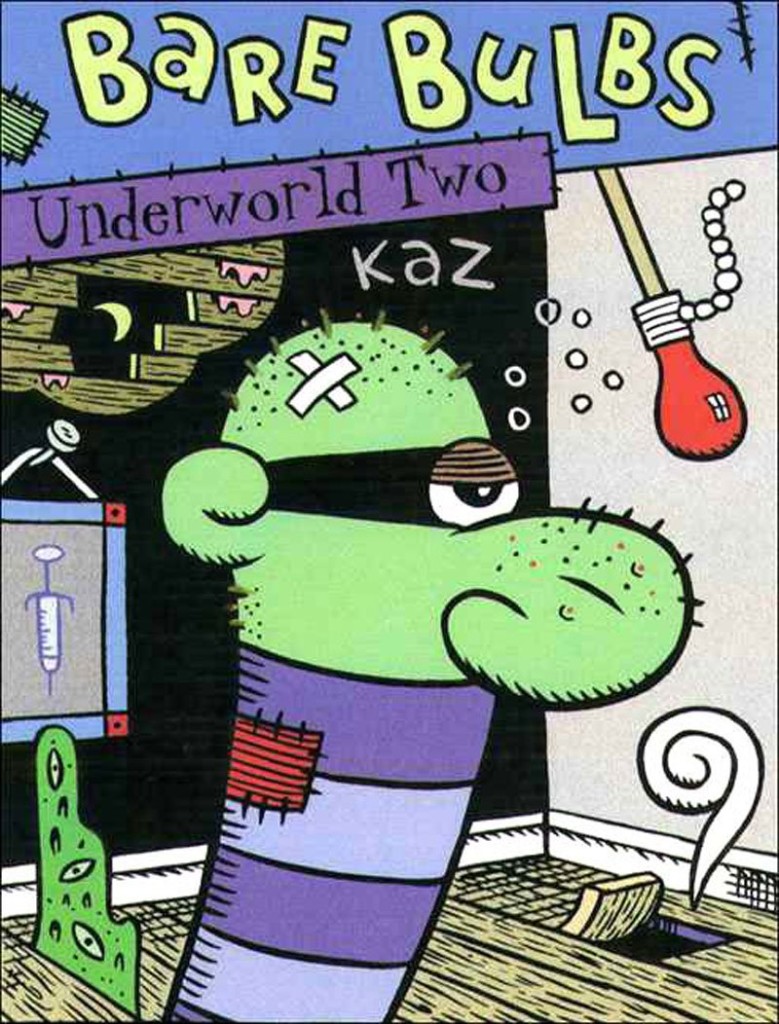 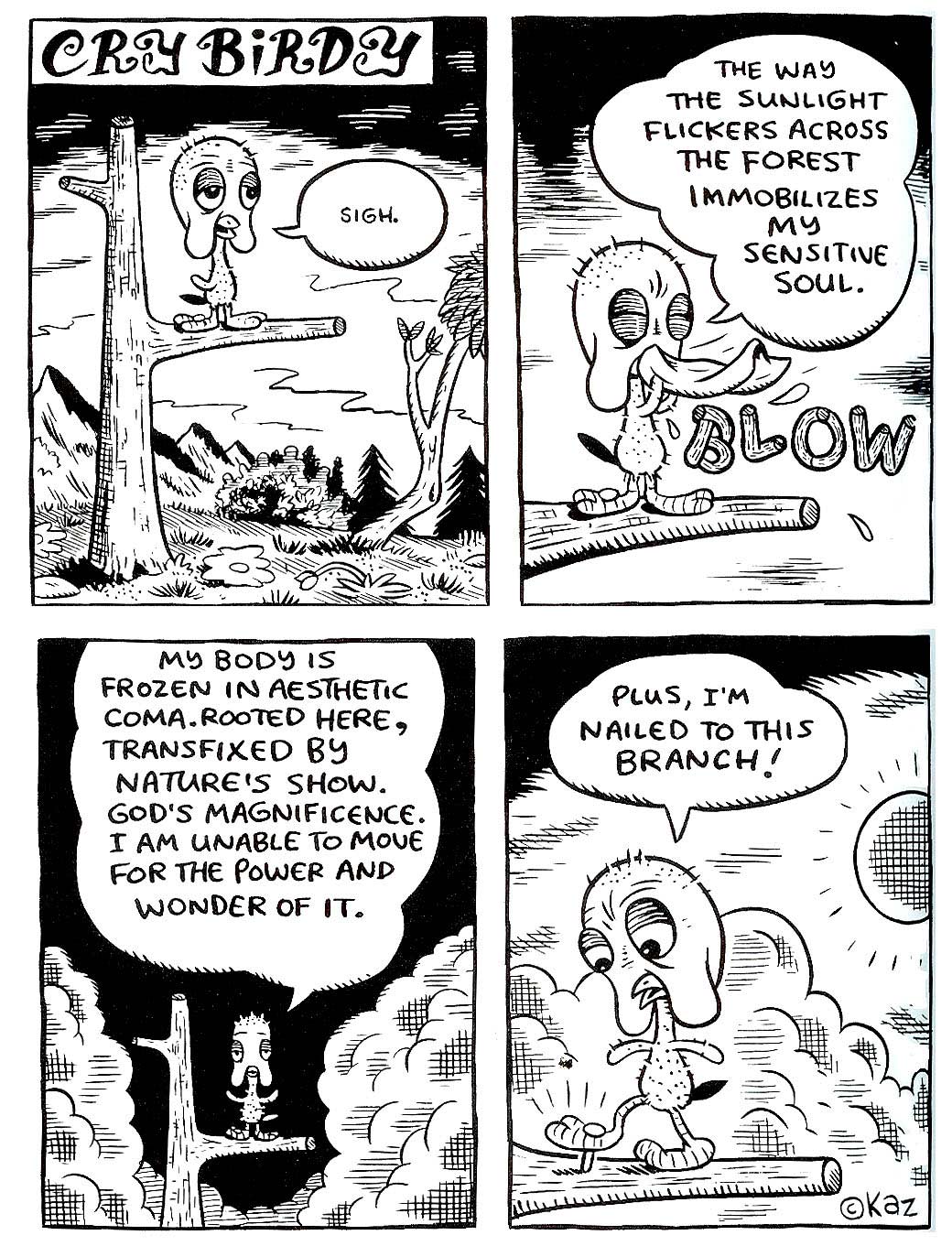 Bare Bulbs is an apt title for the second collection of Underworld – the self-styled “cruel and unusual” strip by Kaz, syndicated in alternative papers across America. The title captures both the run-down interiors where much of it takes place, and the harsh, unremitting light Kaz shines upon them.

Underworld, in the context of comics, inevitably suggests the sex, drugs and taboo busting ‘comix’ of the 1960s and early 1970s. Kaz was growing up then, in the post-industrial wasteland of Hoboken, and fascinated with the emerging punk rock scene across the Hudson in New York City. Put these elements together, and you might begin to imagine Underworld.

The bare bulbs shine onto equally bare floorboards, patches of damp, and plaster falling off stained walls. This is where his cast live –  they are Underworld or Bizarro versions of popular cartoon characters. Nelson looks as he’s been expelled from Bash St. Sam Snuff is a rotund Popeye – his huge chin covered in stubble, and his bulbous forearm tattooed, not with an anchor, but a skull and cross-bones. His much-loathed friend Creep Rat is a gone-to-seed Mickey, with trade-marked mouse ears fuzzy-edged like Nancy’s hair. He’s naked but for allover stubble, and accessorised with sticking plasters. These characters, are damaged, lonely, struggling to feel anything, or care about anyone.

In these rooms they have their most unguarded moments. In one Creep tells Sam his mother is a [stream of colourful language], and Sam responds in kind. “I can’t believe you said that. My mother is dead!” retorts the deflated Creep. “…I’d appreciate it if you would refer to her in the past tense!”

Other characters are nearer to cute – at least in appearance. Pinky Pig and Drafty Duck are also-rans for Warner Bros. “Look,’ says Drafty. “I’ve tried everything! Cartoon characters can’t die!!! [In the next panel he stabs and shoots himself, stands in a puddle with an exposed power cable, while guzzling pills], “We’re doomed to be drawn and redrawn forever. Cursed to walk the earth for eternity. What do we do now?” he continues, as he writhes on the floor. Pinky looks unperturbed on a tatty armchair, before offering: “Drugs are nice.”

Mostly though, there’s a deep empathy for these characters – they’re troubled, but trying for something better. Nuzzle is standing on a chair with a rope round his neck, when there’s a knock at the door. An angry woman bursts in. “I want my rope back, and my chair, and my oven, my gun, and my sleeping pills”, as she looks a dagger at him, “I’m breaking up with you!” This could be considered in poor taste, but like Wile E. Coyote hanging off a cliff by a fingernail, Kaz always retrieves the situation in time. As the door slams behind her, a nooseless Nuzzle muses “And I thought we were so happy”. Anyone picking this up in a dark moment, would surely feel a bit lighter.

And don’t worry about Kaz – he moved to Hollywood, works on SpongeBob SquarePants, and continues Underworld as a labour of love!

Kaz has created a style that could be described as ‘punk rock’. Like The Ramones – it seems effortless, but is highly refined, and behind its swaggering iconoclasm there’s a deep appreciation of its sources.

It’s not for everyone but there’s an undeniable, wit and craft here, and this volume improves on the first. These editions are out-of-print and sought after, though bargains can be found. Fantagraphics have a massive collection scheduled for 2016.