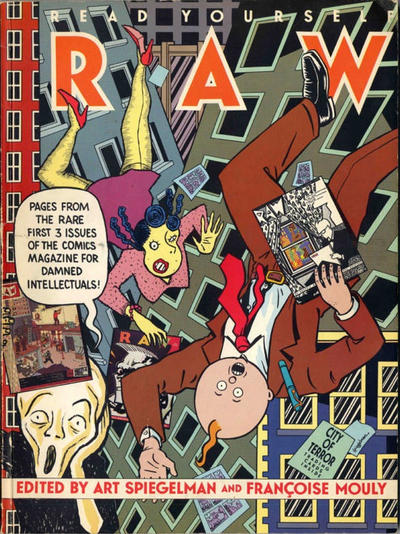 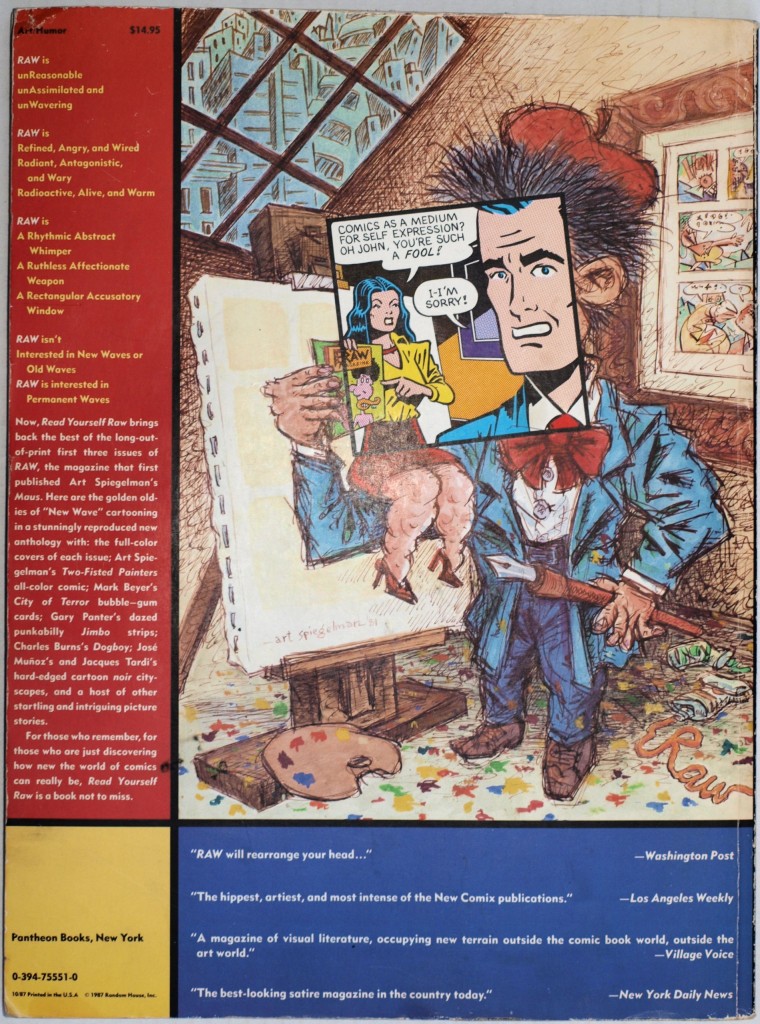 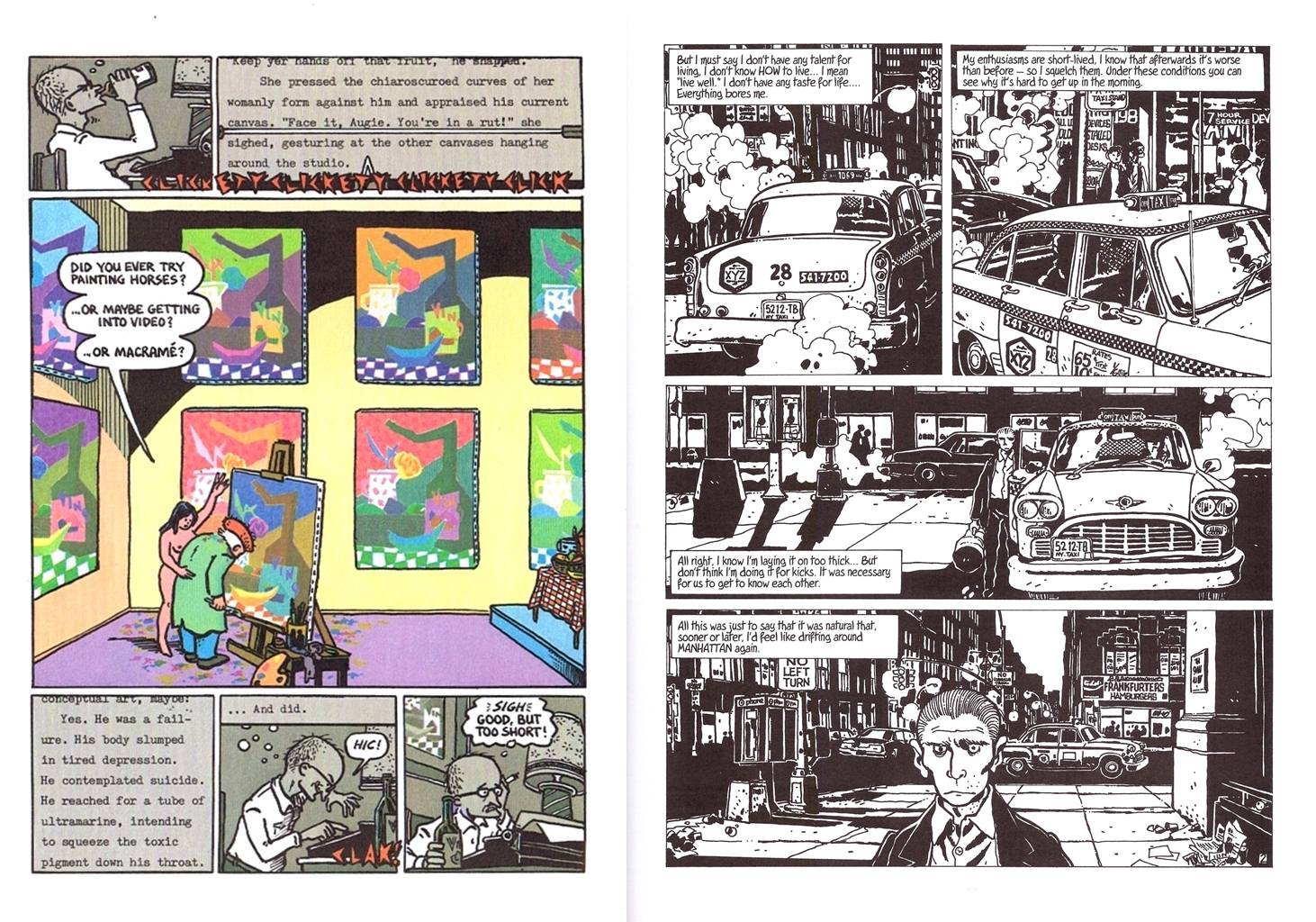 Read Yourself Raw is an excellent collection of material from the first three issues of Spiegelman and Mouly’s Raw. As an anthology of alternative, serious, experimental “comix” it was groundbreaking in the 1980s, and still unsurpassed.

Today, the quantity of serious comics and graphic novels available is almost overwhelming, but the landscape before Raw was unrecognisable. In 1980 Art Spiegelman was a little known, but innovative American comics artist, previously co-editor of Arcade (until Raw the best anthology of alternative comics). Parisian Françoise Mouly’s background was in design and print, and a passion for European comics. All this experience is evident in their editing of this collection.

Raw appeared in a deluxe format with double (US Comic) sized pages and considered production and design. It demanded respect, both for its physical form and for the range and quality of its contents.

It published acclaimed European creators in their first English translations. Joost Swarte, and Ever Meulen immaculately compose their playfully experimental ‘clear line’ pages. Swarte, particularly, is like a super-distilled Herge. Jacques Tardi, and Argentinian-born, Mediterranean-based José Muñoz and Carlos Sampayo look through European eyes at America. Their ‘Mr Conrad, Mr Wilcox,’ from the Joe’s Bar series, is a well-observed and charming story of the friendship between two middle aged men, with an blind-siding noir conclusion. It remains a high point of the medium.

The Americans are a different generation from the underground comix survivors Spiegelman curated in Arcade. Many were his colleagues (Jerry Moriarty) and students at the New York School of Visual Arts. Gary Panter and Mark Beyer are fully formed, and Kaz, Charles Burns and Mark Newgarden, almost so. Beyer’s ‘City of Terror’ is his mix of childlike innocence and existential dread, with a complementary set of bubblegum cards (without gum in this reprint) bound in.

In theory, Bill Griffith, Spiegelman’s partner on Arcade is out of place, yet his contribution ‘The Plot Thickens’ is a career highlight. It’s a two page spread, starting with a large panel of a man stirring his coffee with his finger and saying “I wish I had a spoon.” The panel size and their narrative content decrease with each row, reducing by the end to a tiny panel of a single utensil.

Most of these artists’ work is now available in their own collected editions, so perhaps most valuable are some fascinating pieces at the margins of comics by less well known creators, like Cathy Millet, Heinz Emigholz, and Mouly herself. Re-appropriating printers journal Industry News and Review 6, Mouly selects apposite details of a print room image to illustrate her feelings as a ‘non-artist’ partner – it’s both satisfyingly realised experiment and moving confessional.

Attached as a small separate pamphlet, is Spiegelman’s ‘Two Fisted Painters’. It’s a mock pulp thriller about about “sunday painter” August Dabbler, a colour stealing alien, and a performance artist: “Killing a painter from outer space – that ought to get me a Guggenheim!”. It’s also an extended visual play on comics’ four colour process – in those pre-Photoshop days – perhaps only possible with production expert Mouly’s input.

Each issue of Raw had a loose theme encapsulated in a witty strapline. The three issues represented here were “The Graphix Magazine…” respectively  “of Postponed Suicides”; “for Damned Intellectuals”, and “That Lost its Faith in Nihilism”. It’s a wise decision to keep the selections from each issue behind their respective covers.

This is a brilliantly curated and produced anthology of some of the best work in the form, much otherwise unavailable. This collection is now long out of print, but for connoisseurs, worth tracking down used copies.