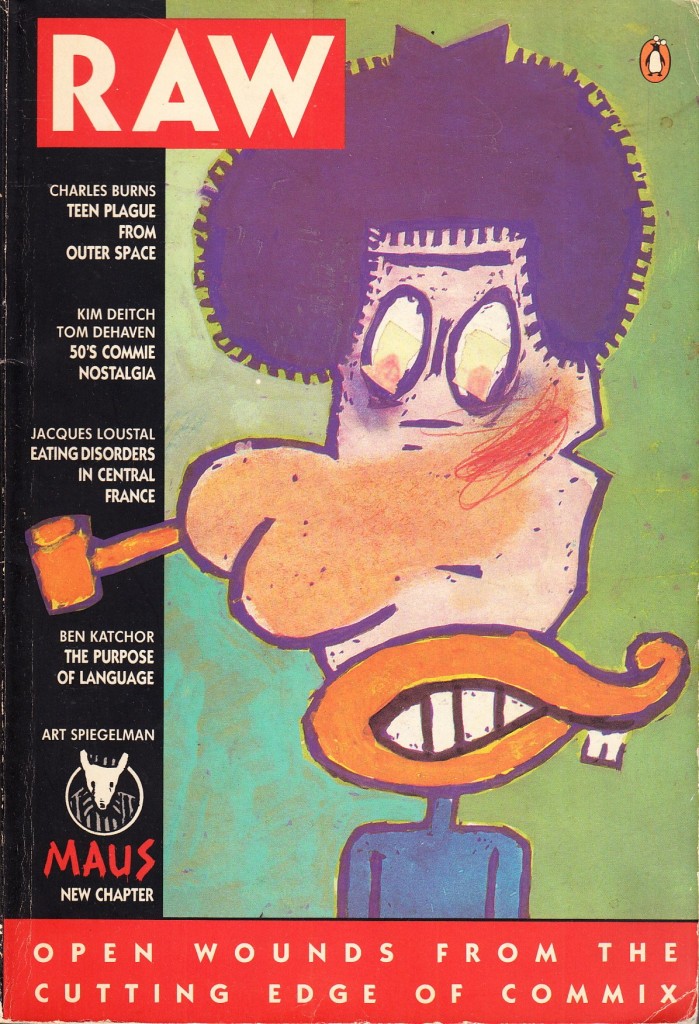 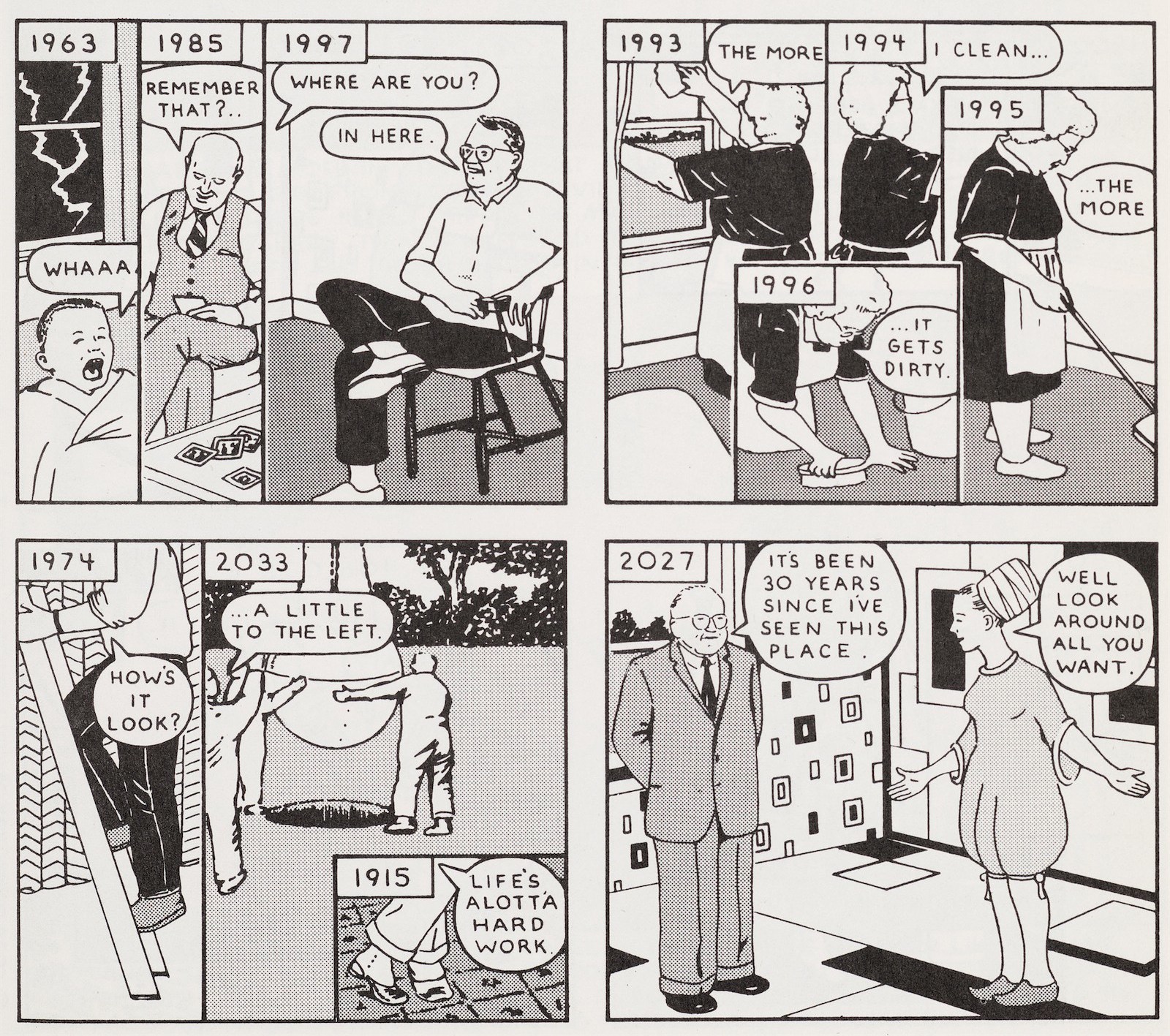 In its original 1980s incarnation, the Art Spigelman and Francoise Mouly edited Raw changed the scope of comics, and paved the way for the current diversity of style and content in graphic novels. This second series changed format from an oversized, self-published magazine to a paperback book-sized publication from Penguin.

Gary Panter’s cover is a first issue statement of intent – an artfully primitive drawing of a face that’s parts Popeye, Donald Duck, and Ernie Bushmiller’s Nancy. Raw is the unruly offspring of American popular culture: they may mock and subvert it, but it’s part of their DNA.

Forbidden comics have suburban kid Tony, aka Big Baby, so hyped up that he becomes convinced the babysitter and her boyfriend are part of an alien ‘Teen Plague’. Charles Burns’ pristine art is dense at this size, but he clearly welcomes the expanded page count. Ben Katchor also stretches out with ‘The Smell on Exterior Street’. It’s cultural archaeology of neglected parts of the city, rendered in his signature unfussy line and grey washes.

In ‘Karla and The Kommies’, Little Karla’s in a huff after her mother changes the TV channel from her beloved cartoons to Senator McCarthy’s anti-communist witch hunts. Before she knows it she’s sucked into a world of lovable cartoon characters planning a ‘Kommie’ takeover. An illuminating coda relates this to creator Kim Deitch’s own childhood in the liberal hipster household of his animator dad, Gene Deitch.

The first world regulars draw on different traditions – Kamagurka/Seele, Ever Meulen, and Joost Swarte, mix the ‘clear line’ of Hergé with the absurdism of the European Avant Garde.

Richard McGuire’s ‘Here’ is what it says – a single scene at different times. It begins with a 45 degree angle shot of an empty interior – the blank canvas of the story. Starting with a birth in 1957, it flashes forward and back a few decades, then centuries and millenia. We glimpse developing lives over the years and decades. We jump in time to see the house being built and after it was demolished. He puts panels within panels – a scene with a tree in the background has an inset panel of the tree as a sapling. Elements become humorous, hypnotic through repetition. One panel (pictured) has five shots of the mother doing housework in different years, her mantra about cleaning split between the years and panels. This is a great idea stunningly realised.

All of the above are delineated with traditional brush/pen and black ink, but other pieces break out of the then comics norm. Kristine Kryttre’s anthropomorphic angst, and Pascal Doury’s manic puppets, are rendered in scraper-board for a white-on-black, woodcut effect. David Holzman’s ‘Wild Heart’ is a sequence of actual woodcuts, channeling the ‘wordless novels’ of Frans Masereel. Loustal renders Villard’s tragic but tender ‘Bulimic’ in luminous colour washes. Finally, Mattotti illustrates Kramsky’s ‘Zephyr’ in his angular, expressionist style – it’s still rare to see pages of such painterly colour cut loose from black outlines.

At the end of Raw‘s first decade, when this re-launch was published, some of the content was familiar, and some still dazzlingly new. Either way, they’re generally brilliantly conceived and executed. There are few anthologies to ever approach this level of both variety and consistent high quality.

Another twenty five years on, this is still state of the art. It’s long out of print but used copies are a bargain.