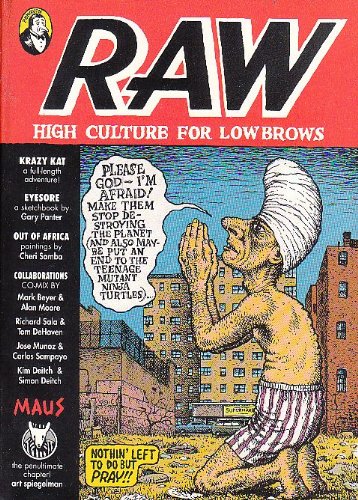 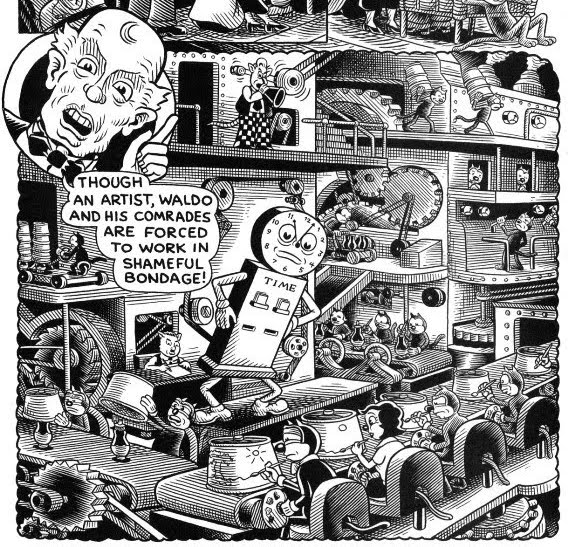 This issue is subtitled High Culture for Lowbrows, and the opening story is almost a manifesto. Francis Masse applies the ideas of Konrad Lorenz about adult responses to juvenile characteristics to… Mickey Mouse. He shows how Mickey’s appearance changed: his nose becoming shorter and more upturned, his forehead moving forward, and his eyes growing bigger “triggering”, as Lorenz puts it, “innate feelings of affection in adults”. A trip to the ‘Mouseum of Natural History’ also shows us exhibits of species with the opposite appearance, evoking aversion: snakes, vultures, sharks etc, and compares these with ‘mickeyised’ depictions of their juvenile states. It’s hardly a story, but a fascinating idea well realised.

The move from the large format of Raw’s first series, trades visual impact for narrative length and depth. Kim Dietch has 40 pages to introduce us to ‘The Boulevard of Broken Dreams’ (pictured). It’s set in the world of animated films, and as the son of animator Gene, Dietch is well-placed to bring it to life. He puts stories within stories, blurs fact and fiction, ‘reality’ and delusion. There’s overlapping love triangles, and tensions between art and commerce. The art has his usual stylised figures, and intricate compositions, but the rendering (assisted by brother Simon) is not quite as razor sharp as usual.

Munoz and Sampayo’s ‘Mr Conrad…’ was a Raw highlight. In their ‘North Americans’, the protagonist has a five-hour wait at a bus station in Mexico, and no one will serve him a drink. A poetic sequence at the start appears to suggest conception and childbirth, but it’s impact on events is not clear. Perhaps he is fleeing responsibilities. The art is lush and expressive, but the story seems inconclusive – one chapter in a longer story?

Raw always highlighted older work, and this time there’s George Herriman’s Krazy Kat. “Katnip Konsolidated has Kollepsed” and the kind Krazy Kat tries to help by sniffing out new katnip sources. It has Herriman’s usual wit and wordplay, and is a rare continuing story. The 1852 piece by Gustave Doré is also unusual. Before he illustrated The Bible, and great literature, he produced this witty comic about growing up with a talent for drawing and cartooning, and the trouble it can lead you into!

New regulars Lynda Barry and Marti return, the former with another child’s-eye-view of growing up, and the latter returning to the over-the-top noir seen in his Cabbie series.

In 1991, Alan Moore was conquering the world, and yes, he’s here, with ‘The Bowing Machine’ a gently satirical piece about Japan’s hierarchical formalities. It’s drawn by the naively brilliant Mark Beyer.

There’s a rare and fascinating glimpse of Chris Ware in development, with ‘I Guess’. Low key memories of growing up, and his mother and step-father, are contrasted with images in the style of early superhero comics, complete with domino masks, and bespectacled science villains.

The usual attention to production detail is apparent, with the Maus pages printed on grey paper, and Krazy Kat and Gary Panter’s sketchbook being on newsprint, the latter in vivid purple ink.

This was the final issue of Raw: Mouly would become Art Editor of the prestigious New Yorker magazine, where she would feature many of the same artists. Perhaps the battle had been won, and the underground was now the intellectual mainstream. All issues of Raw are long out of print, but good buys second-hand.