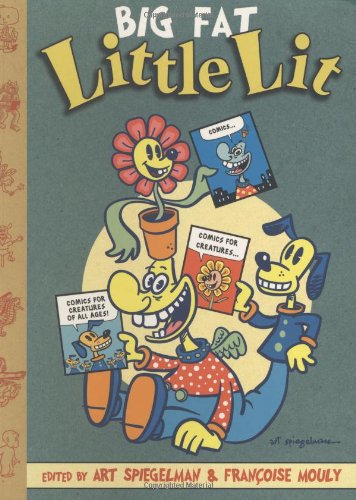 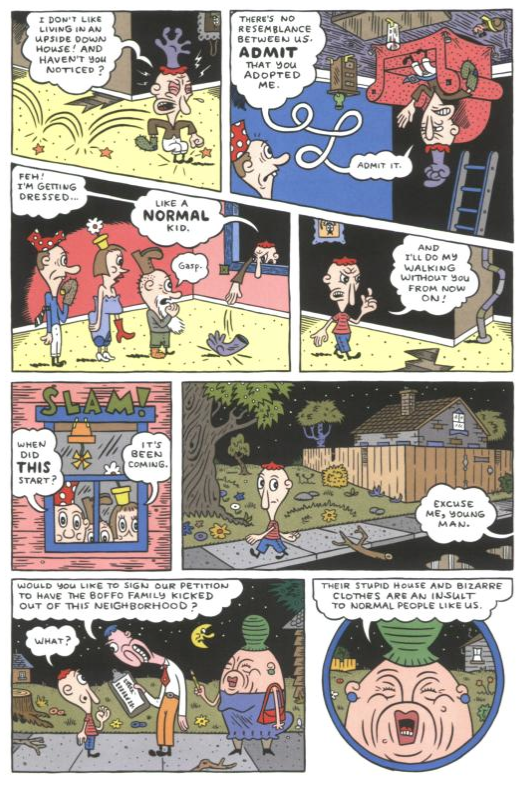 Little Lit was a series of three hardback books of ‘all-ages’ comics, the majority of which are collected in this paperback omnibus edition.

As the cover to Folklore & Fairytale Funnies put it: “Comics – they’re not just for grown-ups any more!” The deliberate irony here is that editors Art Spiegelman and Francoise Mouly were better known for making comics credible for adults. Spiegelman, of course as the creator of the Pulitzer recognised Maus, and together as editors of the influential 1980s anthology Raw. When they produced this they were also parents of two young children.

Little Lit reunites some of the artists published in Raw, including Kaz, Charles Burns, Daniel Clowes, Lorenzo Mattotti, Joost Swarte and Spiegelman himself.

It’s remarkable how little some of these creators have had to modify their approach for a book aimed at children. Swarte provides some of his typically absurd stories, rendered in his usual style, while Kaz maintains his usual bad-but-good approach. The Boffo family live in the suburbs, in a house like the rest, except it’s a bit more colourful, and upside down! Young Ollie feels out of step with a nonsensical world:  “I’m not your son. I was adopted!” It’s a classic Kaz theme, 100% child friendly, and brilliantly funny.

Adults will appreciate the post-modern nature of it, and the twists endings are still twists for adults. They subvert the obvious. This is a book for a world that already has feminist versions of fairy tales. Not that it’s a Trojan Horse for ideologies, but story after story wittily and charmingly subverts expectations. Few will guess the secret of the Yeti, and why it’s at the window struggling with the catch, in the Lemony Snicket/Richard Sala story, Even fewer will predict the staggering twists and turns of the Kaz story.

There are also some classic activity pieces associated with kids publications, like spot the difference or find the character hidden in the busy crowd scene. There’s more Kaz with his strange cartoon lessons. Richard McGuire, already a creator of children’s books as well as experimental comics, such as Here asks ‘Can you Find’ various objects in his almost abstract puzzle. Lewis Trondheim’s ‘A-Maze-ing Adventures’ as the title suggests has a number of short comic sequences to navigate through to reach the end and escape the monster. It’s fun with the sequential form that will appeal to formalists as much as kids.

Little of the content of the three original volumes has been left out, so why isn’t this a straight 3-in-1 compilation? While there’s nothing wrong with the design and packaging, it loses some beautiful covers and end-papers such as Chris Ware’s ‘Fairytale Road Rage’ game, but perhaps its cut and fold accessories were only possibly in a more expensive volume. However, most people won’t be comparing and contrasting in that way and should be more than happy with the current volume, which costs less than any one of the hardbacks.