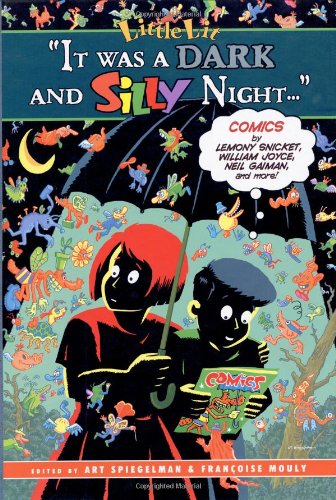 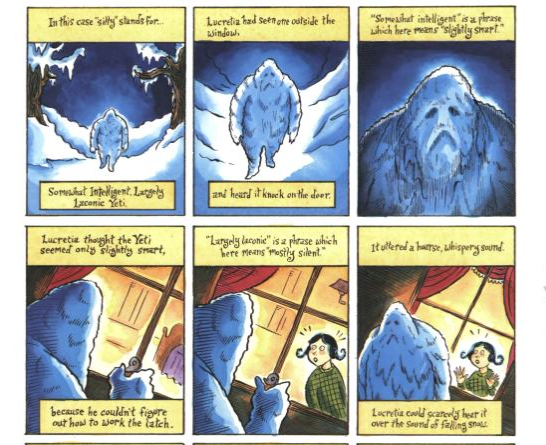 This is the third and final volume of the Little Lit anthologies of ‘all-ages’ comics. The editorial policy continues to include stars of alternative comics, acclaimed children’s book creators, and carefully chosen classics, in a well designed and produced hardback. Much of the contents were later collected in Big Fat Little Lit a paperback omnibus edition.

Previous volumes have been focused on folk tales, and strange stories. For this volume it’s It was a Dark and Silly Night. Each story begins with that phrase but from there they meander into quite different places.

Art Spiegelman and his wife Francoise Mouly, are a dream team as editors. They edited the influential Raw anthology of – to quote one of their ironic slogans – “High Art for Low Brows”. Spiegelman had also subverted kids culture, developing the ironic Garbage Pail Kids and Wacky Packages trading cards for Topps.

Little Lit brings together some of the artists they published in Raw. In this volume it’s Richard Sala, R. Sikoryak, Joost Swarte, and Kaz, and it’s remarkable how little they have had to modify their work for a book ostensibly aimed at children. Kaz draws in his usual bad-but-good style. Even some of his trademark themes are explored, yet in a 100% child-friendly way. The Boffo family live in the suburbs, in a house like the rest, except it’s a bit more colourful, and upside down! Kaz still pursues his themes of feeling out of step with a nonsensical world, kicking off with young Ollie complaining: “I’m not your son. I was adopted!” Not even adults will guess this ending!

Richard Sala draws a story by Lemony Snicket, author of the Series of Unfortunate Events novels. Few will guess the secret of the Yeti, and why it’s at the window struggling with the catch. Joost Swarte gives one of his typically absurd stories, rendered in his usual style: carefully composed images, inked only in even pen lines, and overlaid with colour washes.

There’s some of the interactivity of the earlier volumes. Tony Millionaire challenges with six wordless panels needing reordered so the story makes sense. Barbara McClintock gives a spot-the-difference, in traditional well-rendered children’s book style. Sikoryak with the help of [insert your own name here] issues an invite to “Make your own Dark and Silly Tale!’. The word balloons have colour-coded blanks to insert your choice of nouns, verbs, adjectives and names into the story.

This volume’s classic reprint is Basil Wolverton’s ‘Jumping Jupiter’. The space-faring hero arrives on a planet where everyone looks grim, and is dragged before the king to explain his illegal good cheer:

“Obviously you’re not aware of my royal code ode, toad…

life should be grim,

life should be bitter!

It’s too bad for him

No, that’s not a reference to 21st Century social media. This is from 1950s but still sharp.

Of the work by acclaimed children’s creators. Gahan Wilson illustrates a Neil Gaiman story, with both already at home with the both the dark and the silly. Carlos Nines has a ‘silly’ story of cute mice, told by a ‘dark’ vixen with intentions on the presumably delicious rabbit. The silly story is rendered in simple outlines with flat colour, and the vixen part in a more shadowy realistic style. Keen eyed adults will spot the influences of earlier illustration styles in the Nines and William Joyce pieces.

This sparkles slightly less than previous volumes, but there’s still plenty to be enjoyed by smart kids, parents, aunts, uncles, and anyone else reading it.