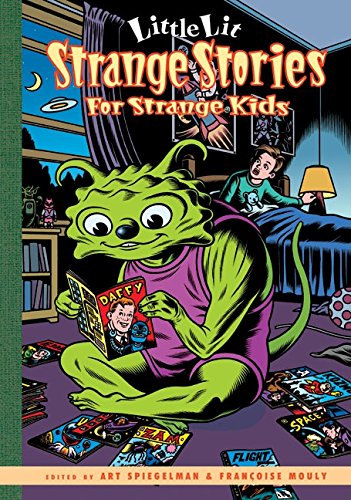 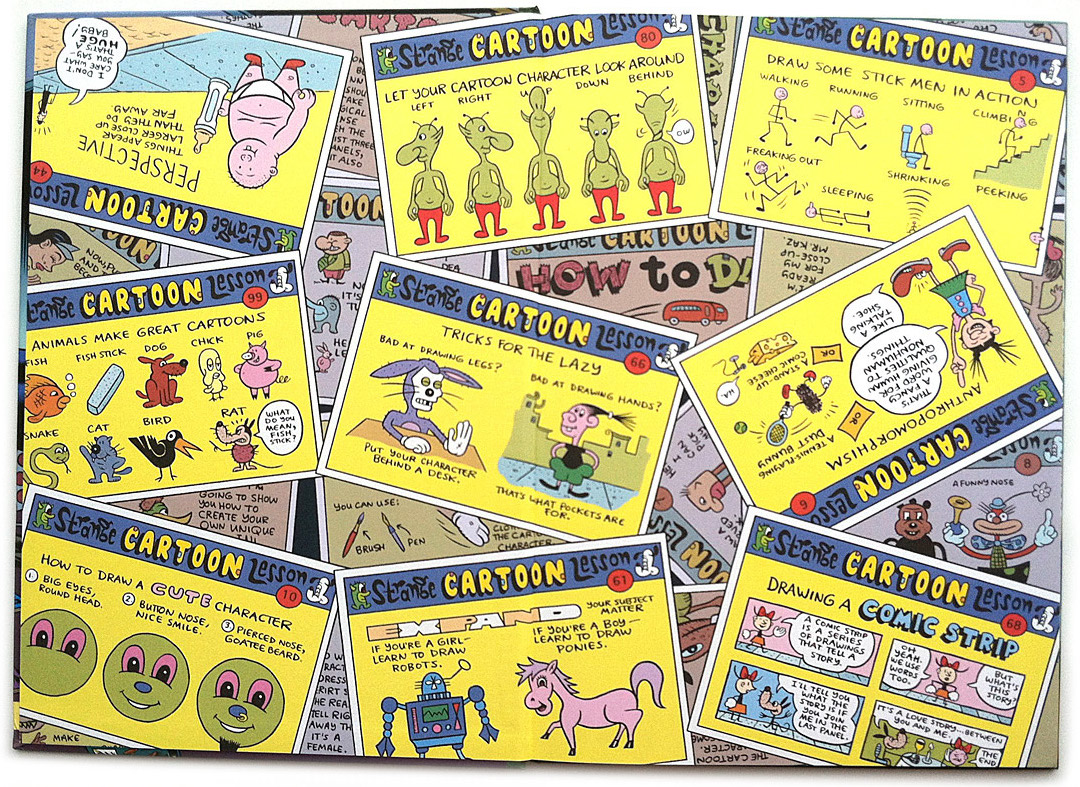 Little Lit is a series for, as one volume describes it, “creatures of all ages!” It includes some of the stars of alternative comics, alongside acclaimed children’s book creators, and some carefully chosen classics. Much of the content was later collected in Big Fat Little Lit, a paperback omnibus edition.

This and the other two original volumes (It Was a Dark and Silly Night and Folklore & Fairytale Funnies), are over-sized hardbacks with design and production values with appeal for children and art loving adults alike. This one has endpapers that are a set of ‘Strange Cartoon Lesson’ cards by Kaz – “How to draw a cute character. 1. Big eyes, round head. 2. Button Nose, nice smile. 3. Pierced nose, goatee beard.”

Art Spiegelman and his wife Francoise Mouly, are a dream team as editors. Spiegelman is of course the creator of the Pulitzer winning Maus, and Mouly Art Editor of the prestigious New Yorker magazine. They jointly edited the influential Raw anthology that assertively positioned comics as – to quote one of their ironic slogans – “High Art for Low Brows”.  At the time of producing these books they had two small children themselves.

Spiegelman has a track record of subverting genuine kids’ popular culture. He worked as a consultant for Topps, where he developed their trading card ranges Garbage Pail Kids and Wacky Packages. the latter being spoof consumer products such as Blisterene mouthwash and Neveready batteries.

Some Raw artists are included here, and quite at home. Kim Deitch has a long-standing fascination with old weird popular culture, particularly cartoon cats. In ‘These Cats Today!’ an old-timer tells a young girl suitably strange cat legends of the great city of Katropolis, and settlement on the moon with colonies of mice fed on green cheese. Spiegelman’s ‘The Several Selves of Shelby Sheldrake’ is quantum physics for kids – every thought or action creates an alternative self. This quickly causes problems; “I’m really great.” claims one. “You’re really conceited,” retorts another, while claiming “I am really great!”

Richard McGuire asks ‘Can you Find?’ various objects in his almost abstract puzzle. Known for the acclaimed Here, McGuire was already a creator of children’s books like What’s Wrong with This Book? There are are other activity pieces, such as Where’s Wally creator Martin Handford’s typically packed scene in which to spot socks, worms and aliens. Lewis Trondheim does ‘A-Maze-ing Adventures’. As the title suggests, this has a maze of short comic sequences to navigate through to reach the end and escape the monster. It’s fun with the sequential form that will appeal to formalists as much as kids.

Posy Simmonds’ ‘Mr Frost’ is a charming story nicely illustrated with warm and cold colours. Jules Feiffer possibly takes the strangeness furthest when a child becomes ‘Trapped In A Comic Book’. The sequence from Crockett Johnson’s 1940s Barnaby strip plays on kids and adults different realities – perhaps a forerunner of Calvin and Hobbes. His parents tell him his cigar smoking ‘fairy godfather’ is a dream. “Sure he’s real, Pop. Just because I dreamed about him doesn’t prove he isn’t. Aren’t you and Mom real?”