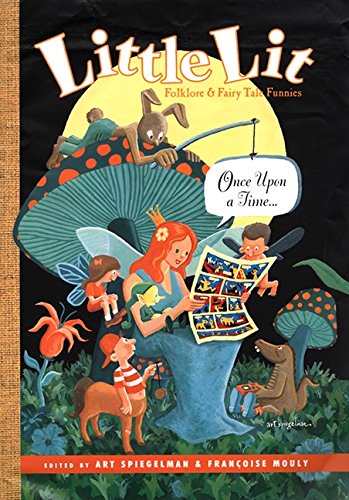 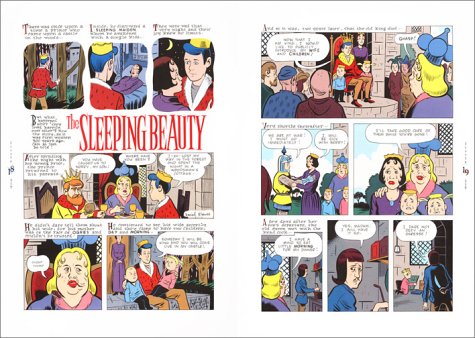 Little Lit is a series of three books of ‘all-ages’ comics, with a later paperback omnibus Big Fat Little Lit that gathers most content from the three original volumes. All original volumes are oversized hardbacks with design and production values that will appeal to children and art loving adults alike. As the cover to this one says: “Comics – they’re not just for grown-ups any more!”

The deliberate irony here is that editors Art Spiegelman and Francoise Mouly were better known for making comics credible for adults. Spiegelman, of course as the creator of the Pulitzer recognised Maus, and together as editors of the influential 1980s anthology Raw.

This volume is subtitled Folklore and Fairytale Funnies, the others being Strange Stories for Strange Kids and It was a Dark and Silly Night. Some content is based on traditional stories, some well known and others less so. William Joyce does ‘Humpty Trouble’, and Daniel Clowes contributes ‘Sleeping Beauty’ looking at what happens after they lived happily ever after. Spiegelman gives us the Hassidic parable of ‘Prince Rooster’, and Joost Swarte his take on Dutch folktale ‘The Leafless Tree’.

Others appear to to be totally new stories passing for folklore, for example ‘The Baker’s Daughter’ by Harry Bliss. Lorenzo Mattotti and Jerry Kramsky tell us what happens when ‘The Two Hunchbacks,’ meet three singing grandmas in the scary woods.

There’s of course a range of art styles. Swarte’s is rendered in his distinctive style: carefully composed images, inked only in even pen lines, and overlaid with colour washes. It’s exactly Hergé’s ‘clear line’ style only even better! David Mazzucchelli illustrates a Japanese fable in a style influenced by Japanese woodcuts. The Mattotti story is more cartoony than his usual, but that’s still half-way between Beatles cartoon The Yellow Submarine, and the bold colours and abstract shapes of early 20th Century modern art.

The editorial policy extends to classic comics, in this volume a Walt Kelly story from the 1940s Fairytale Parade. ‘The Gingerbread Man’ is suitably smart as well as cute. He cheekily escapes the dinner table and outruns his makers. He thwarts the bear, and the wolf, and will surely outsmart the fox, or will he? Happy endings should not be taken for granted!

There are also classic activity pieces like ones you’ll remember from kids publications – Bruce McCall asks ‘What’s Wrong with this Picture?’, and J. Otto Seibold challenges us to ‘Find the Twins’. A particular treat is Chris Ware’s ‘Fairytale Road Rage’ a board game worked into the end-papers with pop-out accessories and cut-and-fold playing pieces. It’s a phenomenally detailed labour of love, and like the games invented by the Surrealist artists. Ware’s characters Rusty Brown and Chalky White “collecteurs extraordinaire” (fail dismally to) help explain the instructions: “Oh No! You didn’t cut out the pages did you?”

Adults will appreciate the post-modern nature of it all. This is book for a world that already has feminist versions of fairy tales. And the twists endings are still twists for adults. If these stories have lessons – they’re not usually the ones you expect. It’s a collection of some fine artists being as witty, hip and subversive as ever.