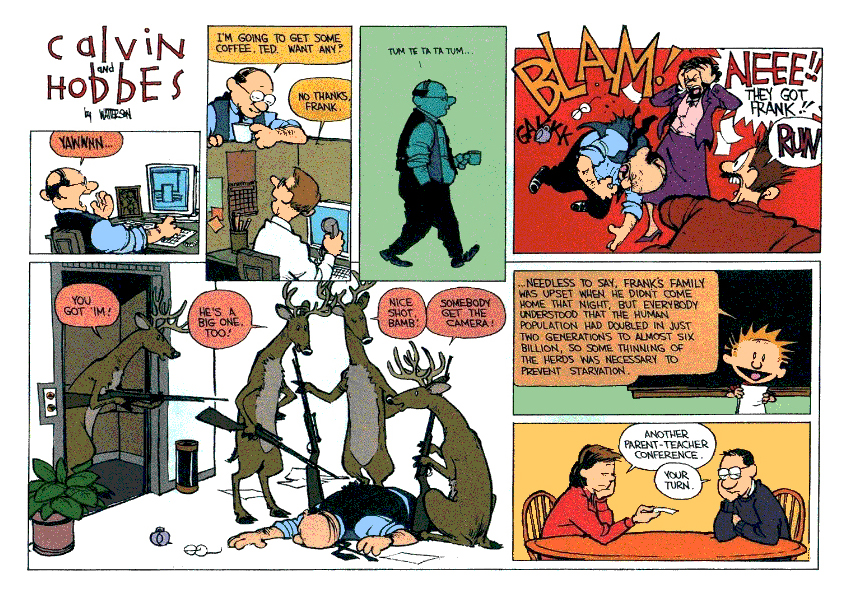 This is the tenth collection of Calvin and Hobbes, the newspaper strip by Bill Watterson, which maintained a standard of beautifully composed, wonderfully silly, cleverly written and hilarious cartooning that made this newspaper strip an all-conquering success. Watterson’s cast for this strip did not expand at all from the very first year until the end, consisting solely of Calvin, his friend Hobbes the tiger, Mom and Dad (who were never named), Suzie Derkins, Rosalyn the babysitter, Mrs Wormwood the teacher, the unnamed headmaster and Moe the bully. Apart from a short appearance by Calvin’s Uncle Max very early on, an experiment that was never repeated, there were no other regular characters. It’s a tribute to Watterson’s enormous skill in creating very well-defined, interesting personalities that this never feels limiting.

Calvin’s world is only constrained by his imagination and that’s so boundless that it feels as if the strip could go anywhere at any time. It often does, of course, and the fun is in seeing how he makes the world conform to his wishes, while his parents and the other characters try to make him conform to the world instead. The nature of Hobbes’ agency as a separate being from Calvin is a big part of these strips. In this volume there are several funny and quite strange indications that he has a very full life of his own without Calvin around at all. Even stranger for us is that Calvin doesn’t question this, which is something to think about.

In other areas, Calvin tries to have everyone to sign contracts specifying the nature of their interactions with him, he struggles to reconcile his greedy desires for Christmas presents with his creeping suspicion that Santa may not exist and he’s being good for no reason, and as usual he expends far more energy on avoiding conformity of any kind than simply fitting in. In response to a test at school that requires him to “explain Newton’s First Law of Motion in your own words”, he writes ‘Yakka Foob Mog. Grug Pubbawup Zink Wattoom Garork Chumble Spuzz.’ “I love loopholes,” he says, triumphantly.

Funny writing, deft cartooning, it’s a shame it had to ever end, but this is the penultimate volume of Calvin and Hobbes, and the final collection is It’s A Magical World.