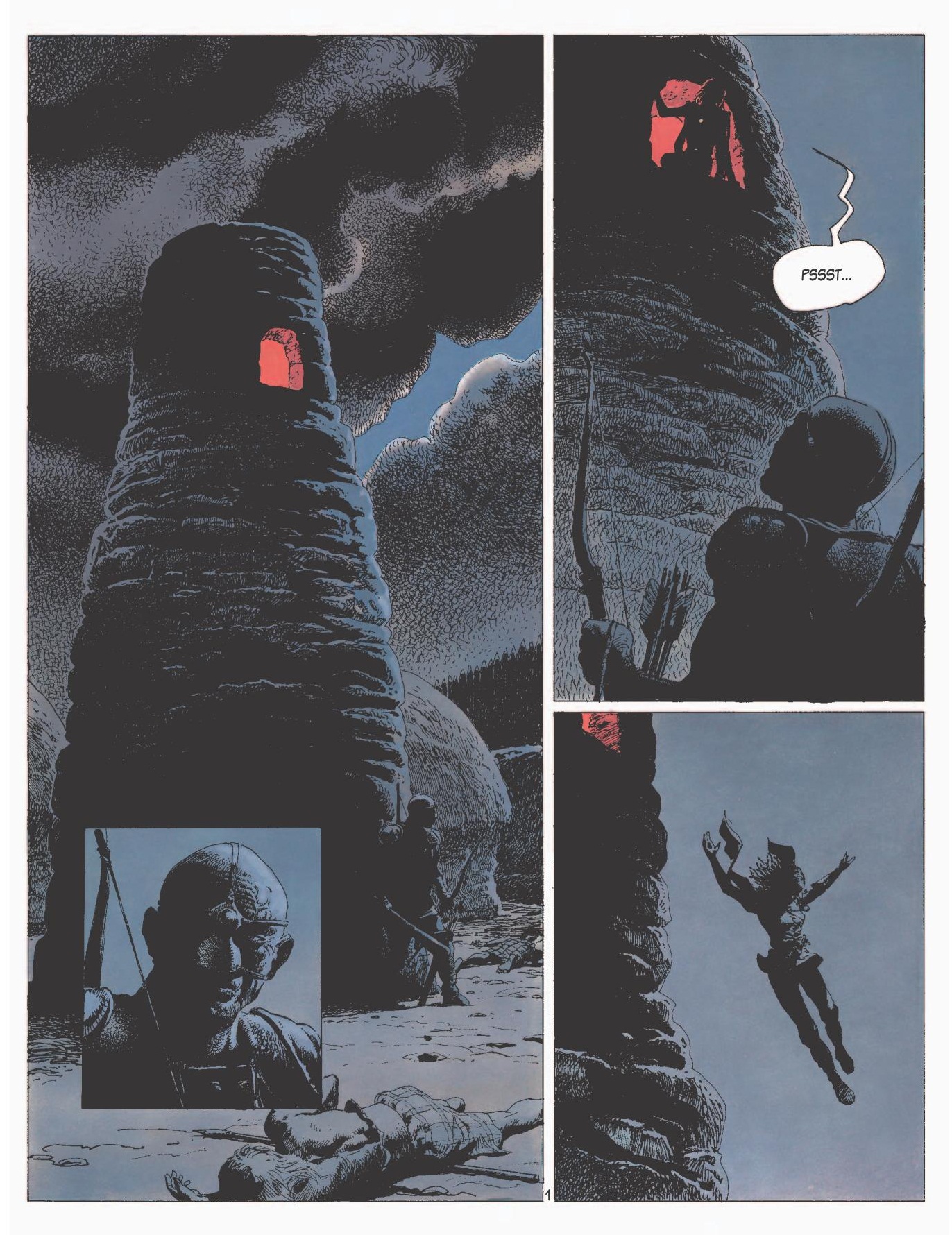 A reason for Thorgal‘s popularity is how it ignores genre boundaries. For a fantasy sword and sorcery tale, Thorgal is strongly rooted in science fiction. Thorgal’s origins are solid sci-fi gold (Child of the Stars), his bond with wife Aaricia very eternal love of the romance variety. Here Jean Van Hamme flirts further with horror and supernatural elements, also changing how women are represented in the series.

Roughly three years have passed since the closing events of Beyond the Shadows. Thorgal, Aaricia and their son Jolan are living on a secluded island, finding some measure of peace at last. As Thorgal is the son of space travelers crashed on earth (Child of the Stars) he’s durable and heals quicker than others. He’s otherwise fairly normal, but there is a suggestion that his race has abilities. Truth is, Thorgal doesn’t know much about his heritage, so when Jolan writes and reads words he’s never learned Thorgal is perplexed. ‘Alinoe’ toys with possibilities about how that heritage might manifest itself in Jolan. When Thorgal leaves on a supply run, Jolan befriends a strange green-haired boy named Alinoe and things escalate to put both Aaricia and Jolan in grave danger. ‘Alinoe’ is an utterly creepy story, yet it’s the creative team’s rendering of believable family interactions that impress. Grzegorz Rosiński nails these intimate moments whether indoors or outside: Thorgal and Jolan conversing father to son in the autumn air; Aaricia facing the tempestuous moodiness of Jolan’s boyhood; the family having a supper in the glow of firelight, the perspectives changing in well-staged cinematic angles. Despite the tender moments, the pace is fast, the mood tense and action scenes superb.

‘The Archers’ sees Thorgal blown off course during a supply run. An initially fraught meeting with youngster Tjall-the-Fiery leads to introductions with Tjall’s uncle Argun Treefoot. Treefoot is a blacksmith specialising in bows and arrows, and while an honest man himself, his clientele can be very dangerous. One is the beautiful young lady thief Kriss of Valnor and her mentor Sigwald-the-Burnt. An archery contest held by a feudal Lord entices all characters to enter but the road is dangerous. Deadlier yet is Kriss of Valnor: deceitful, vain, troublesome, greedy, petty and vengeful.

The opening panels to ‘The Archers’ are grand. As seen in the sample art, mysterious figures stage a heist on a Caledonian tribe’s shrine. Waves crash on stormy seas, swords clash in dark forests, Treefoot’s mountain smithy glows with the flames of a red hot forge, and arrows zing through the air. Rosiński is a master at battle scenes, but ones at night?! Bloody hell, it’s good! He and Van Hamme produced three volumes of Thorgal in the same year beginning with the French album of Child of the Stars, Alinoe, and The Archers. With the details Rosiński packs into every frame, how his art consistently improves is incredible. Van Hamme’s writing is good, though perhaps sometimes presuming too much that the reader can follow his plot as well as he can. He likes to script and let Rosiński tell the story so it can take a few moments to realise his intentions. Still, Van Hamme is unafraid to push the envelope with disturbing themes and subplots including unsettling violence on innocents and women. Implied rather than portrayed, the effect is still striking.

The Archers leads into the’ Qa Arc’, a series of albums that explores Thorgal’s heritage further. It indicates the start of what is perhaps Van Hamme’s and Rosinski’s peak period on Thorgal with fantastic storytelling. The adventure and danger ramps up in The Land of Qa.