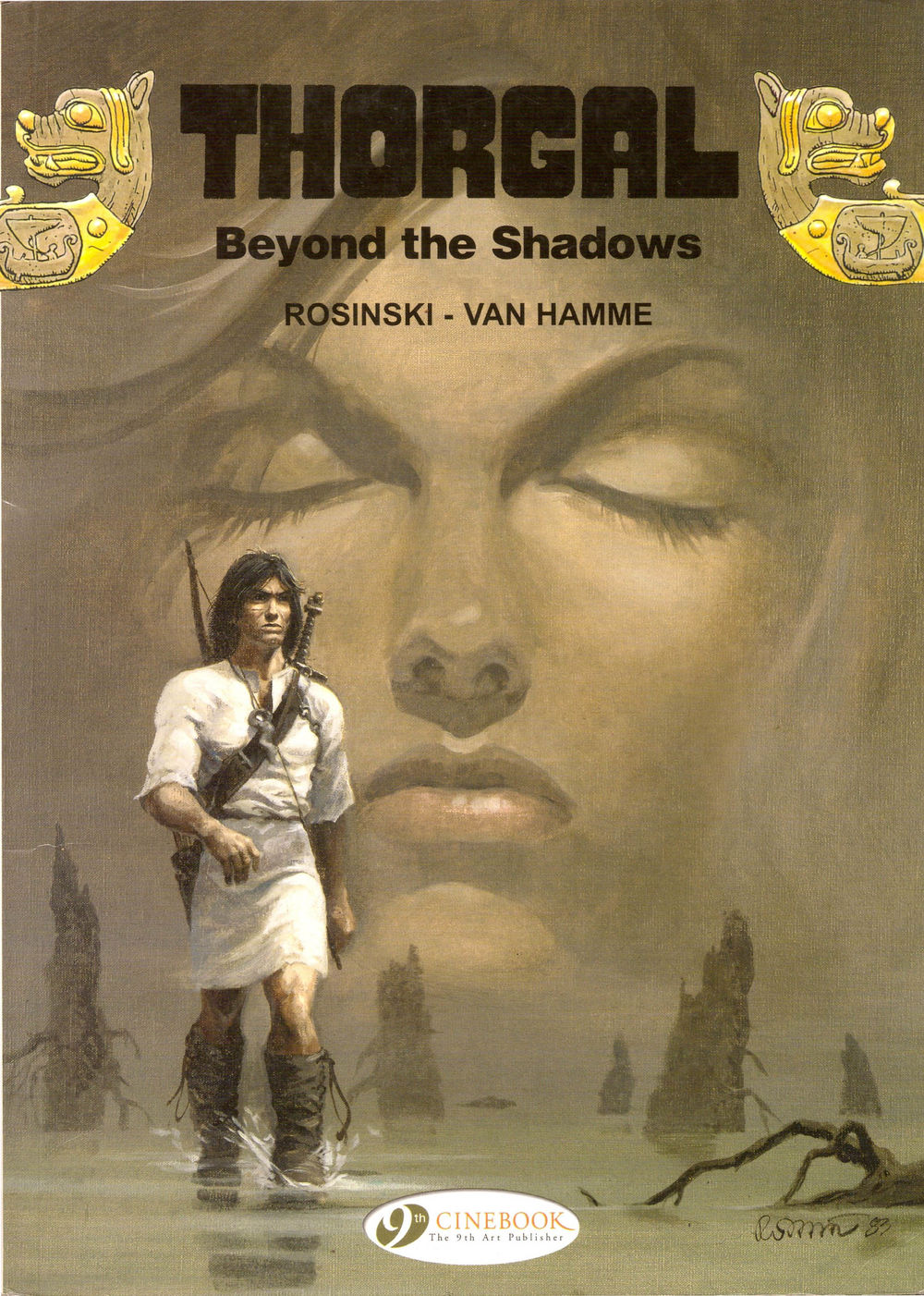 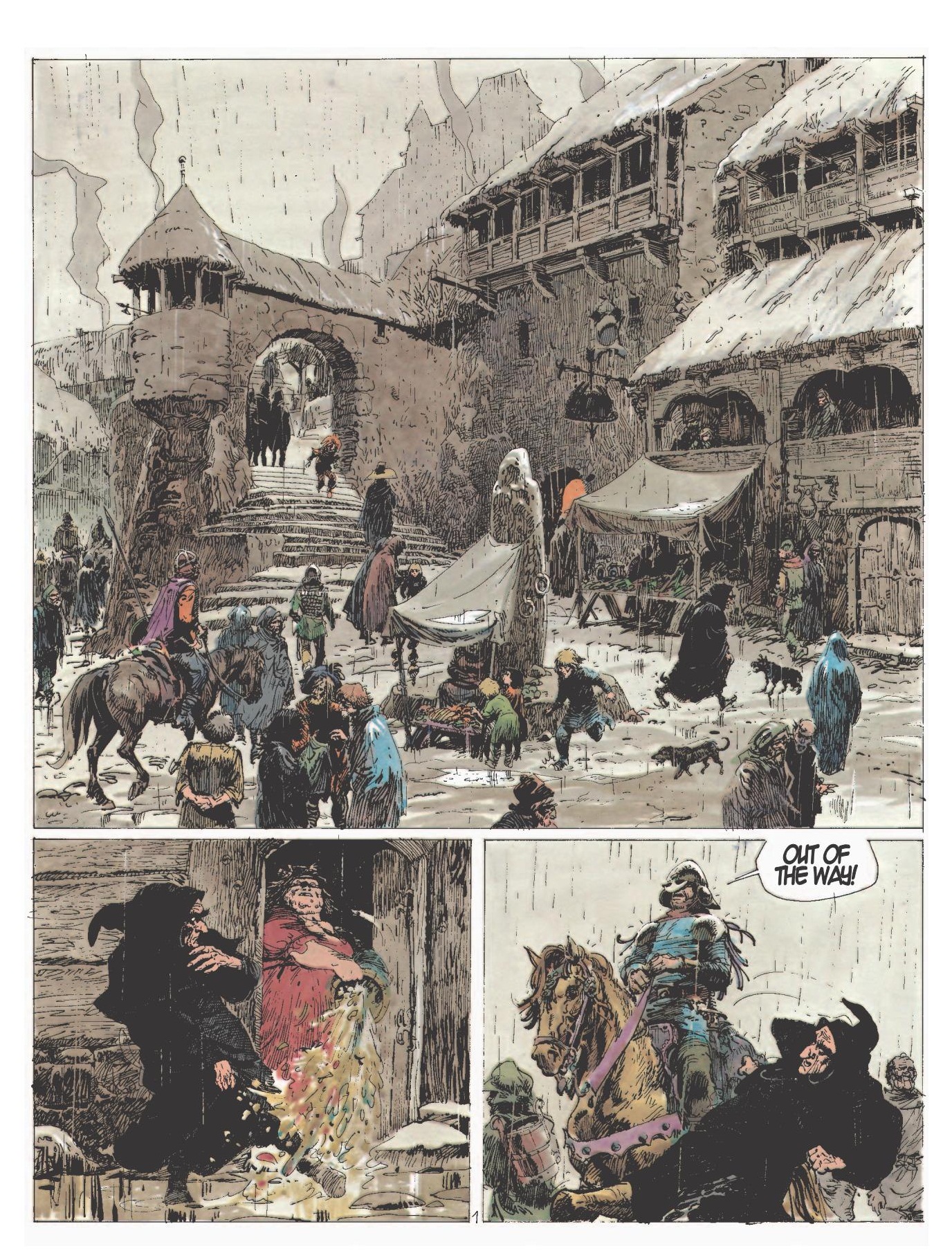 Beyond the Shadows contains the middle and concluding stories of what is known as the ‘Brek Zarith Arc’ begun in The Three Elders of Aran. It’s a defining point in Thorgal, the point when writer Jean Van Hamme’s and artist Grzegorz Rosiński’s artistic relationship really started working.

‘Beyond the Shadows’ opens on rain drenched pages, Rosiński adding an air of misery. Thorgal is a broken man after the events of Three Elders, ironically cared for by the woman largely responsible for his woes. However, two men named Wargan and Galathorn appear, offering Thorgal hope that his wife Aaricia might be alive. He has to agree to help them reclaim the throne of Brek Zarith, an empire across the sea ruled by a mad king. The catch is he has to traverse the barrier to the Second World, the place of the dead.

It’s obvious Roy Thomas and John Buscema’s Conan the Barbarian influenced Van Hamme and Rosiński’s work on Thorgal, but it’s different, and in no way inferior. Van Hamme had a pretty good idea where Thorgal was headed when he started, and now his plot is far more coherent, adding strength to the story’s foundation. This is supported nicely by Rosiński’s fabulous art, an improvement even on the previous books. As Thorgal traverses the underworld, faces swirl into one another and magnificently rendered dinosaurs come to life, time merging in on itself. In the background stunted trees protrude from stagnant swamps, snakes slithering through the shallows. His colours are brilliant, but Rosiński also knows how to use black and white to enforce the eerie environment of the Abode of Shadows. Years later it is as impressive now as when it won the creators the Award for Best Comic at the now defunct Prix Saint-Michel in 1983.

‘The Fall of Brek Zarith’ says it all, the end of the arc in sight as Thorgal accompanies Wargan, Galathorn and a Viking host to take back the throne from Brek Zarith’s King Shardar. Van Hamme takes a lot of inspiration from the Viking sagas, a sweeping epic that captures all the hopefulness and melancholy of its source material. And like the sagas it occasionally doesn’t make sense. Van Hamme frequently allows time to lapse between stories, offering the reader the opportunity to connect the dots. It’s slightly disorientating, but also relatively minor since it has no obvious effect on pacing. Again Rosiński’s art is magnificent, a wonderful array of weirdness on display with unsettling believability. His portrayal of visions in hues of blue and purple add an ethereal quality. Most impressively, Brek Zarith is full of people. Deviants in sinister dress up, Viking galleys ready for war – his work is consistent, detailed and delightful. This second half is slightly weaker with annoying little inconsistencies, but it has a magnificently devious and chilling foe in King Shardar. He isn’t the pantomime villain Rosiński usually presents us with, possessing bearing and authority, and carrying a terrifying ruthless streak. It demonstrates the progression in Van Hamme’s characters

Studying Beyond the Shadows, it’s easy to see why Thorgal has become a long-running and popular series in Europe. Everything about it improves and it’s thoroughly entertaining. Even if fantasy isn’t your preferred genre, look this up for Rosiński’s stunning art.

Thorgal’s saga continues in The Archers.