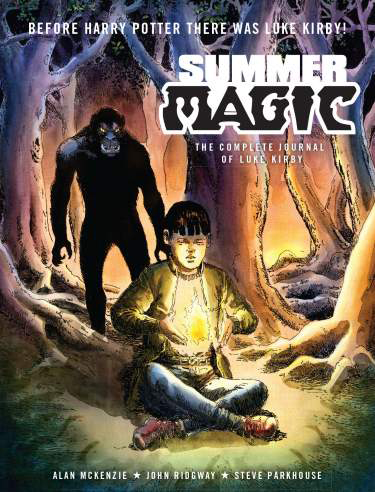 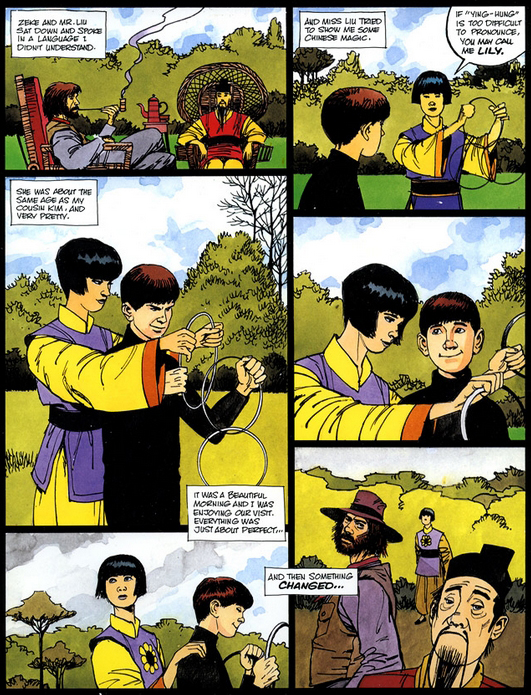 This was a strange strip for 2000 AD, somewhat out of place alongside the hard sci-fi and grizzled anti-heroes that populate the comic. Alan McKenzie, writer and one-time Tharg the Mighty (2000 AD editor), was assistant editor when he wrote this, and he had worked with artists John Ridgway and Steve Parkhouse before, on the Doctor Who Magazine.

Summer Magic, the Complete Journal of Luke Kirby, collects a series of stories featuring a young boy as he embarks upon his apprenticeship to become an alchemist. Although the book tries to big up the resemblance to another boy wizard, the stories really couldn’t be further removed from Harry Potter. Think instead of strange otherworldly1970’s TV and movies, anything from Bagpuss to The Box of Delights, by way of The Wicker Man. Throw in a bit of Susan Cooper’s The Dark is Rising and Richard Carpenter’s excellent Robin of Sherwood TV programme and you’ve got an inkling of the flavour of these stories.

‘Summer Magic’, the first story, is a good example, and feels very much like Enid Blyton meets Hammer Horror (Ridgway also illustrated Blyton’s Famous Five books). A bucolic village is the setting for a series of animal mutilations and a murder, and it’s Luke’s job to deal with the beast responsible for the deaths, which he does very cleverly.

The next story, ‘A Winter’s Tale’, is a one-parter illustrated by Graham Higgins in a style that’s more run-of-the-mill 2000 AD with little of the charm of Ridgway’s work. This is followed by another one-part story, ‘The Dark Path’, with Ridgway, assisted by Tim Perkins, back on art duties.

‘The Night Walker’ has Ridgway flying solo on art for all thirteen parts of this disturbing story involving vampires and gruesome child murders. The setting is more urban than the previous tales, though Ridgway plays to his strengths in choice of locations.

A couple of short instalments, ‘Sympathy for the Devil: Prologue’ and ‘Trick or Treat’, take us back to events before we joined Luke’s story, and ‘Sympathy for the Devil’ is a ten-parter in which Luke travels to Hell to try to save his father. Steve Parkhouse, assisted by Nick Abazis and Gina Hart, replaces Ridgway. His more cartoony style takes some getting used to after Ridgway’s naturalistic treatment, but he turns out to be an inspired choice, something that becomes really obvious in the next story.

‘The Old Straight Track’, yet another ten-part tale, takes its name from Alfred Watkin’s 1925 book that was the first to posit the notion of a series of energy lines (or leys) running throughout the country and connecting places of power. Parkhouse handles all the artwork himself – including the lettering – and relies heavily on watercolours to produce some wonderfully atmospheric pages.

‘The Price’, the final story, sees Ridgway return for a one-part story that, like the entire feature, is much more thoughtful than the usual 2000 AD fare. If the stories have a unifying theme, it’s that actions have consequences, and the series deals with death, loss and horror with a much lighter touch than that usually seen in most comics.

The mythology in this series is a mishmash of everything from New Age, Christian, Oriental and pagan belief systems. However, that doesn’t detract at all from the stories, which expand organically on the original premise to produce something that’s akin to a very English version of Hellboy. This book is a real treat, with gorgeous artwork and an intriguing story, and is likely to leave the reader wanting more.