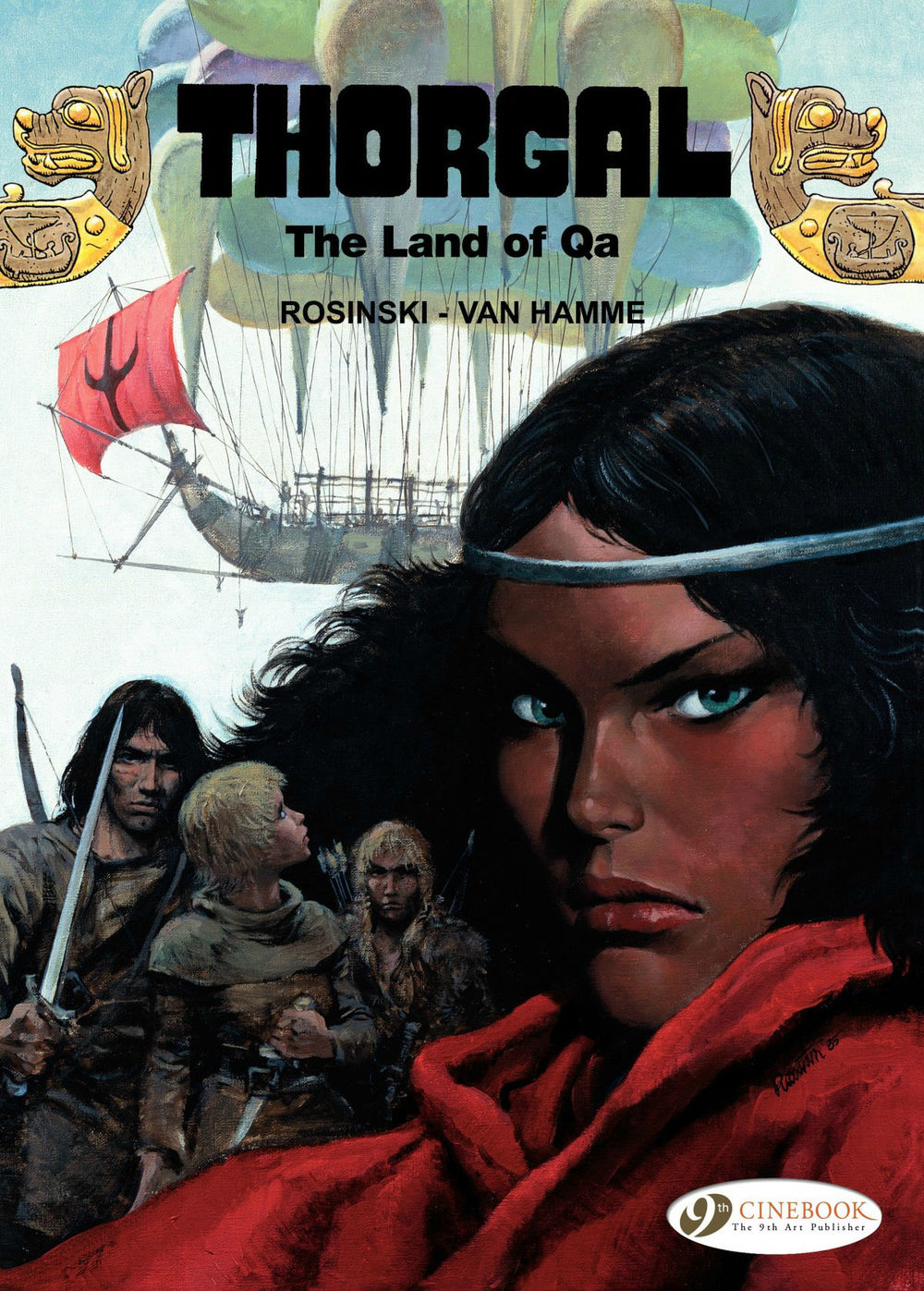 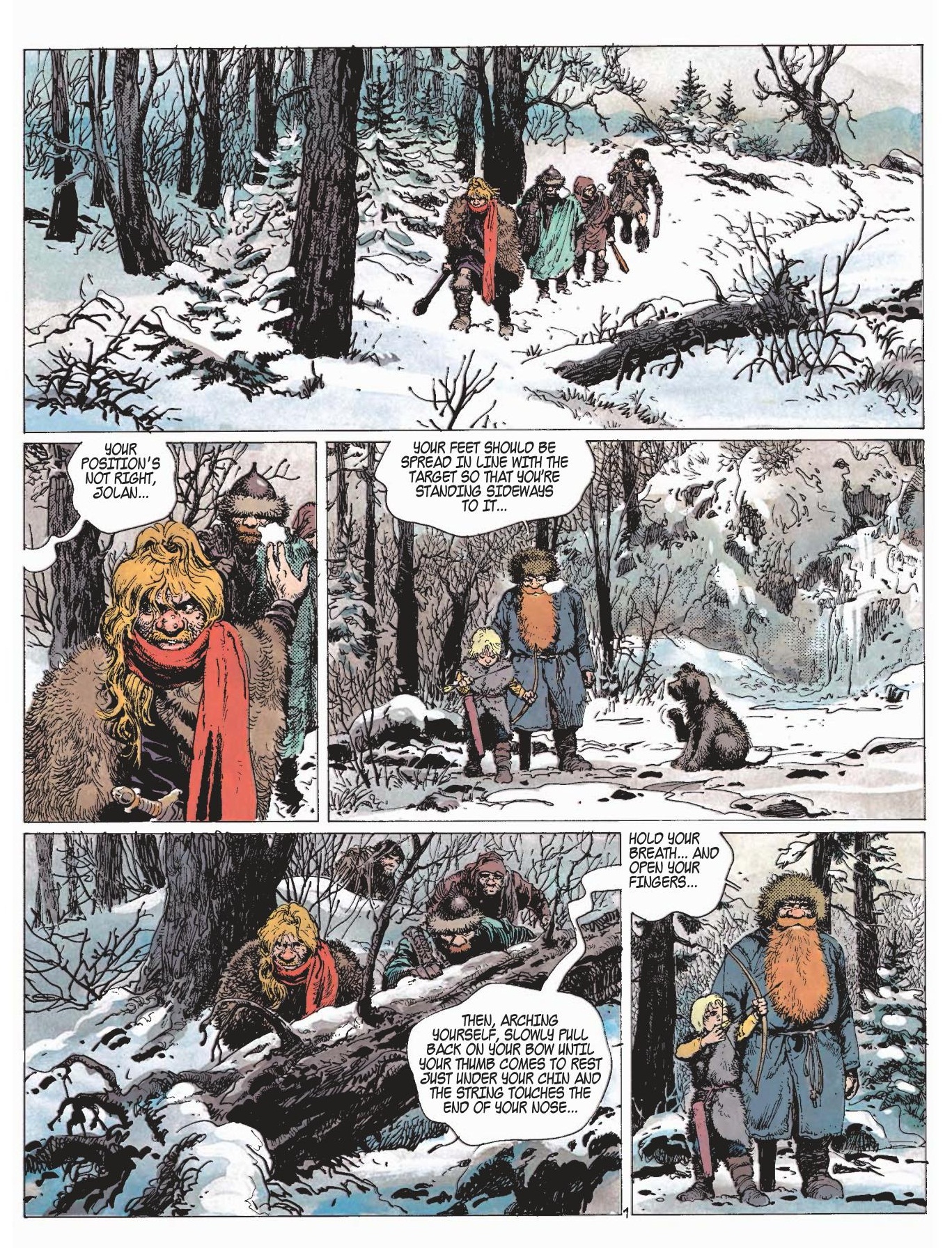 Earlier in the series Thorgal met Argun Treefoot and his nephew Tjall, characters going on to play important recurring roles. Their introduction gave Thorgal the closest thing he had to friends and at the end of The Archers they travelled with him to his island home. Now in the first snows of winter Argun and Tjall are preparing to go home. Their friendship has been beneficial to Thorgal, Aaricia and especially their son Jolan. Also introduced in The Archers was the raven haired warrior woman Kriss of Valnor. Vain and greedy, Thorgal’s decision to treat her like a petulant child has dangerous results. She appears in Thorgal’s home with a deal he can’t dare refuse. Jolan and Argun have been kidnapped on her orders. Only she knows where they are. Thorgal has to accompany her on a mission to the mysterious land of Qa or never see his son again. With no real option Thorgal, Aaricia and Tjall go with Kriss. Thousands of miles away, in the jungles of Qa, Thorgal is about to dramatically uncover his past.

The fifth volume in Cinebook’s Thorgal series, The Land of Qa also collects The Eyes of Tanatloc. Writer Jean Van Hamme blends steampunk, fantasy, and science fiction with South American history and legend. Melding Mayan, Aztec and Incan cultures, it’s a magnificent world that’s historical and futuristic in one swoop. Airships engage in deadly battle, and people experience mystical awakenings. It’s fun and imaginative, Van Hamme growing in confidence even attempting monologues he’s previosuly avoided. It works because co-creator Grzegorz Rosiński’s illustration is sublime. His splendid use of colour and eye for detail capture the imagination. His landscapes are sumptuous, the tale sweeping over oceans and through the air. Jungles are cloying and humid, deserts hot and arid, swamps teeming with danger. No less spectacular are his structures, detailed and packed with life. Is it possible that this is what life in those ancient civilizations could have been like? It’s enthralling going right down to what the inhabitants did or, in this case, didn’t wear. Cinebook has altered some of the original nudity so as not to offend readers. Unfortunately, removing the nipples from a naked breast doesn’t stop it being a breast, it only makes the owners look disfigured. Would it not have been better to add clothing instead? Among pages of near flawless beautiful art, this is an annoying blemish.

Juxtaposed against “Nipple Gate” is Aaricia’s evolution from helpless co-dependant princess. It shows the resolve of a mother, turning her into a strong Viking woman worthy of her heritage. The transition itself is well handled by Van Hamme. Now in a position where she has to kill or die, Aaricia experiences a gamut of emotions. Far from stereotyping her femininity, it enhances it in ways more obvious later on. Kriss’s interaction with Aaricia is an interesting clash of personalities and values, well captured by Rosinski and well scripted by the writer.

The Land of Qa is epic! Emotional, cinematic and atmospheric it gets better with each turn of the page. It ends on a compelling cliffhanger that concludes in The City of the Lost God. 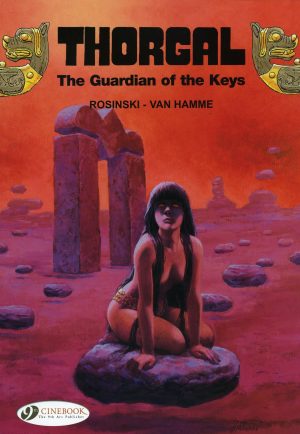