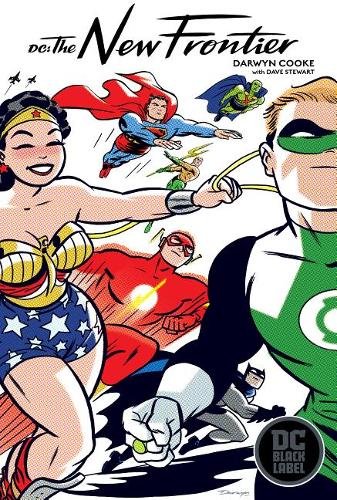 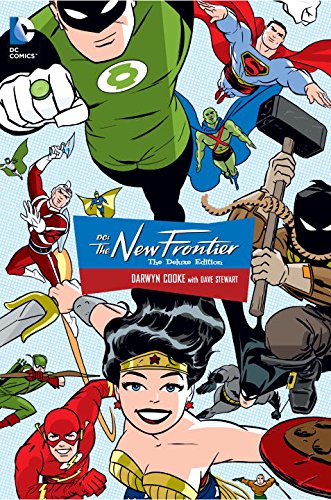 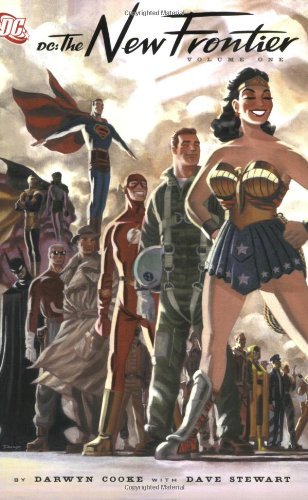 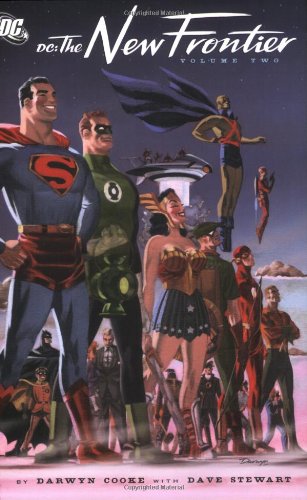 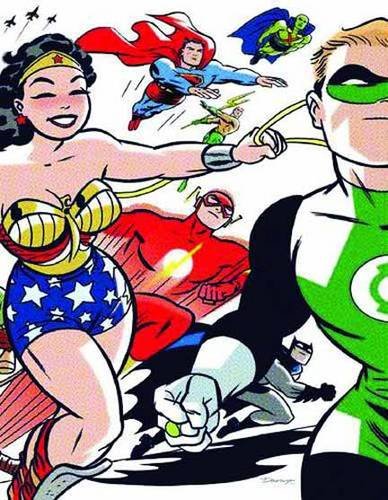 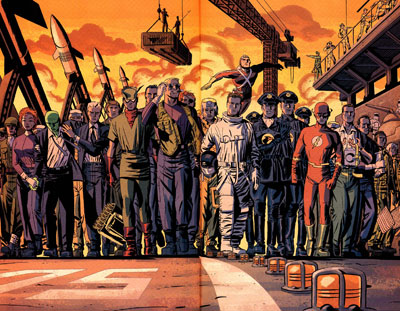 Previously available as two separate volumes, DC followed the logical path and collected this entire ambitious and engrossing story in one large package, currently available as The Black Label Edition. It’s also subsequently been issued in Absolute and Deluxe editions.

In an afterword Darwyn Cooke offers several suggestions as to how the story he created can be viewed: “A love letter to a bygone era or an allegorical reflection of contemporary concerns. Big shoot-em-up with giant monster or character-driven historical melodrama.” It’s all of those and additionally a cynicism-free view of the heroic ideal.

The New Frontier begins in 1945, moving forward to John Kennedy’s Democratic Party nomination acceptance speech in 1960s from which the story takes its title. In DC continuity this was an era when the superheroes disappeared years before their successors emerged. Cooke cleverly integrates not only his main players, primarily those who would become the Challengers of the Unknown and the Justice League’s founding members, but also their supporting casts. This is achieved without violating or invalidating anyone else’s stories, and doesn’t deliver a misty-eyed whitewash ignoring the problems of the times. The plot is initially developed in small sequences featuring several characters interacting, and most are revealed as heroes without costumes. The level of care applied can be gauged by the numerous small touches that will fly over the heads of most readers as they’re not fundamental to the story, yet they’re charming easter eggs. Hal Jordan utters “War no more”, Leslie Thomkins works at Arkham Asylum, a kid named Irons reads about an African-American hero who fought the Ku Klux Klan, and Challenger Mountain was designed by a mad genius named Kurtzberg.

Cooke’s art is stylishly retro, capturing the feel of the times while applying a modern cartoon gloss, and Dave Stewart’s colours are gloriously applied, adding subtle moods, be they horrific, psychedelic or romantic. Cooke also fundamentally defines his cast, his varied methods including beautifully drawn panels depicting a glance, or narrative captions. The Martian Manhunter masquerades as human, but remains other-worldly; Ted Grant is the world champion boxer because his assets encompass more than boxing; Hal Jordan is young and brash, raised on tales of his father’s heroism and Lois Lane is an effective reporter because she cares.

As time progresses everyone experiences a growing unease, somehow connected with an island discovered during the dying days of World War II. From dozens of small moments Cooke constructs an imaginative climax and a message of hope. It’s a cinematic absorption throughout, Cooke ensuring that by using three wide panels per page to tell the story, echoing the 1950s Widescreen experience.

The Black Label paperback presentation is a scaled-down version of the lavish, slip-cased Absolute New Frontier, including all the sketches, excised sequences, and three follow-up chapters Cooke produced after the original story. Cooke enlarges on a story element for the main series in drawing a sequence of Superman sent to apprehend Batman in the same widescreen fashion. It’s well told with Wonder Woman playing a pivotal role. The teamings of Robin and Kid Flash, and Wonder Woman with Black Canary occur post the conclusion of The New Frontier, well drawn by David Bullock and J. Bone respectively. They’re both more tongue in cheek material, playing with the era, but eminently readable.

By setting his story in the past Cooke supplies a timeless quality. It may be that one day his stylised retro-modern depiction will appear as dated as the comics that inspired it, but that day is a long way off yet, and The New Frontier remains a gripping read.