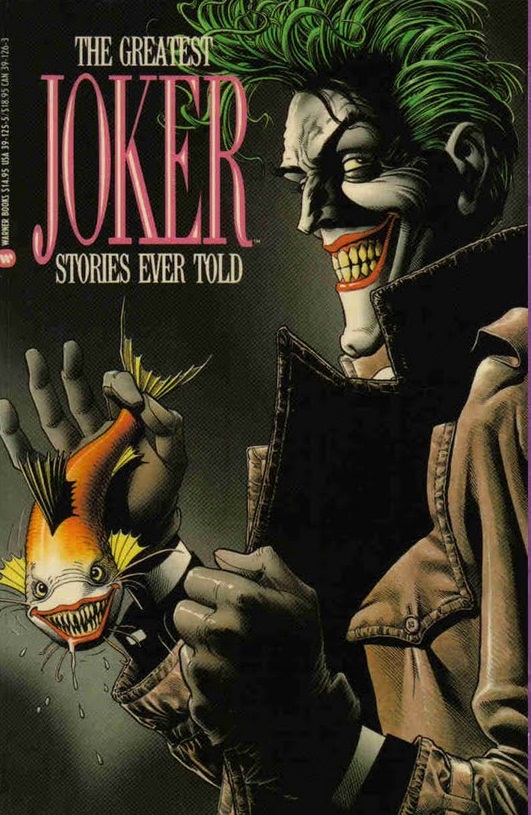 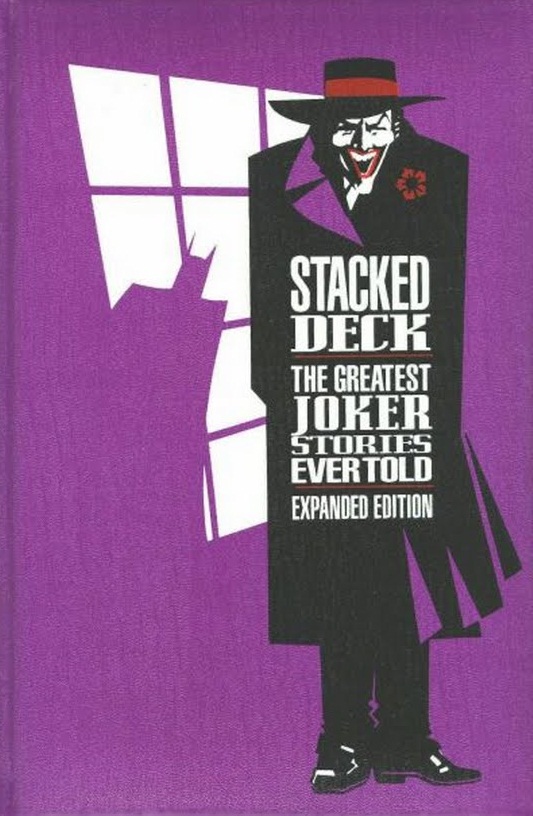 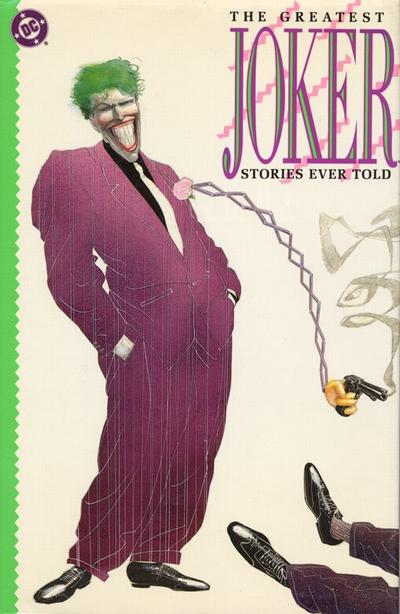 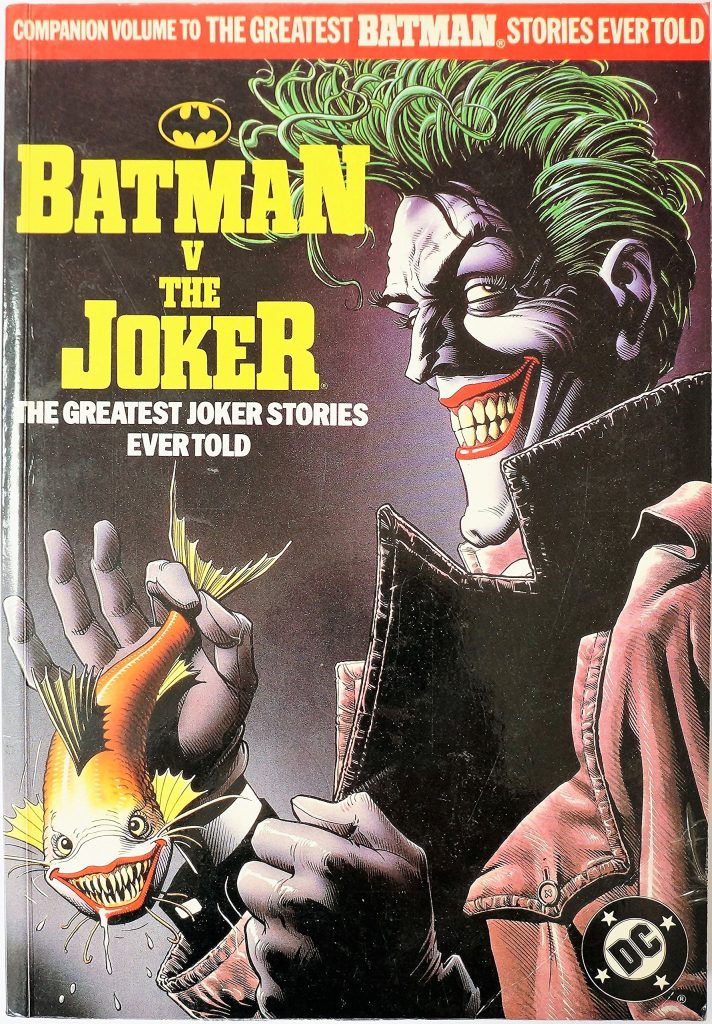 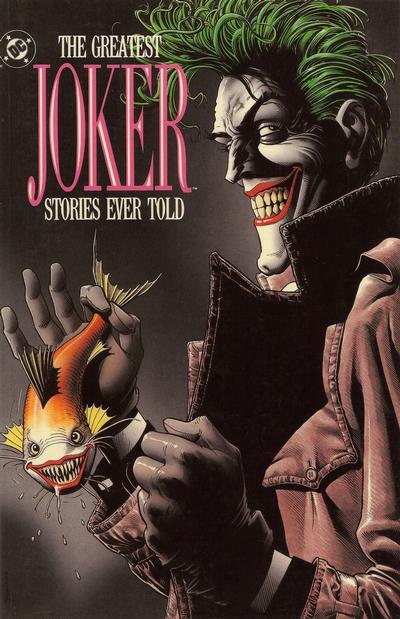 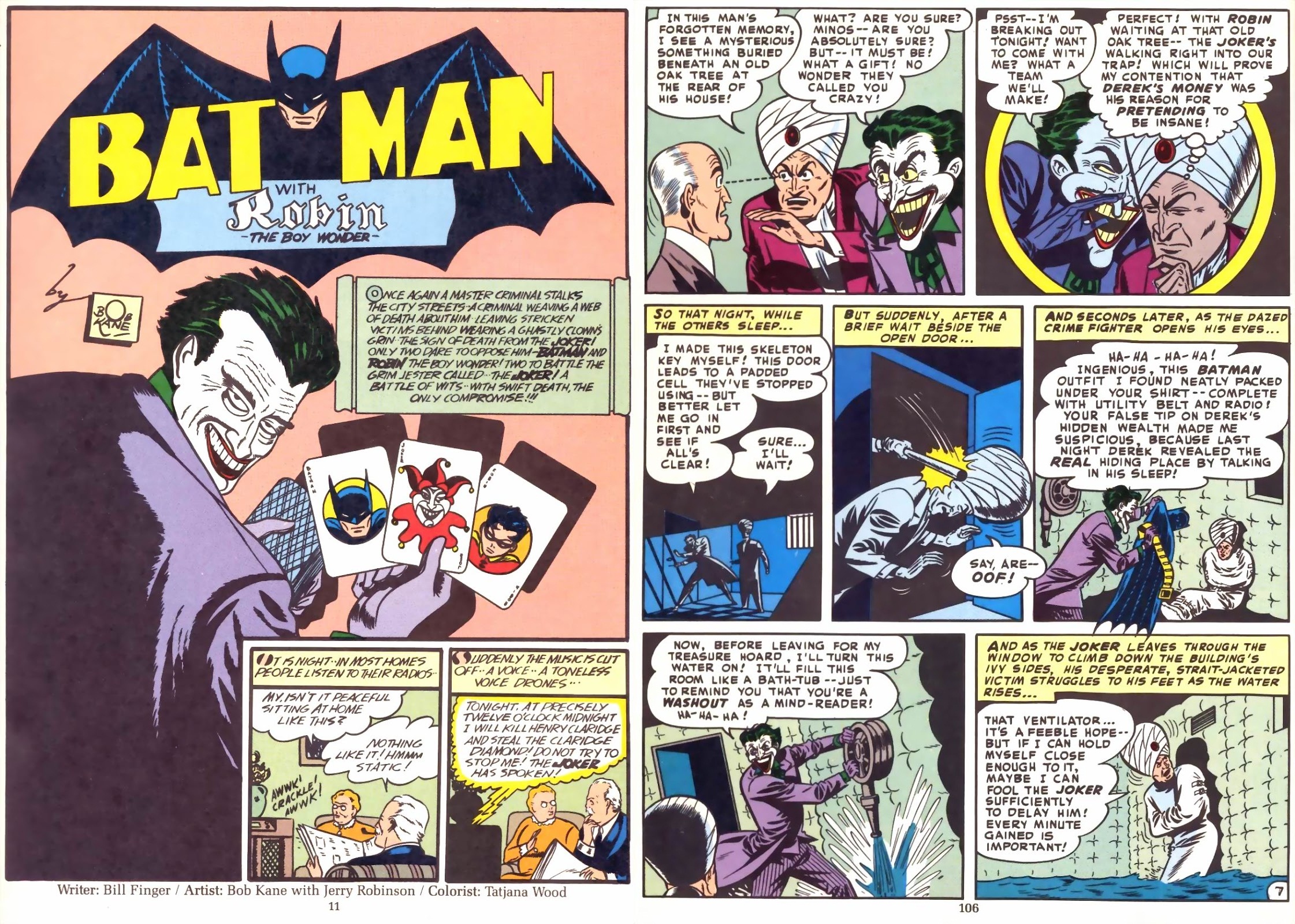 A month after their well curated Greatest Batman Stories Ever Told anthology in 1988, DC published a companion volume, over which equal care was taken in the selection of stories reprinted. Both editor Mike Gold’s introduction and Mark Waid’s afterword make this clear. What’s also obvious is that the Joker has a charisma that even the other top of the line Batman villains lack. Subsequent collections based around them have been lacking in comparison with this.

Part of the reason is the Joker being visually creepy from the very beginning. Although there’s a crudity to Jerry Robinson’s art from his first appearance (sample left), there’s also a chilling quality, and that’s been sustained over the years, playing on the disturbing nature of pallid clown make-up. It’s a look that survives assorted interpretations. Marshall Rogers draws on the 1940s style for his 1970s version, Neal Adams gives the Joker’s eyes a manic gleam, while Dick Sprang draws a grotesque, developing the triangular face and pointed chin that became trademarks (sample right). Walt Simonson’s collection ending story is another notable version.

As with much superhero material before the 1980s or so, an open frame of mind is required to accept the silliness and plot contrivances. There’s barely a change from the 1940s to the 1960s, yet it’s some leap from the slapstick of E. Nelson Bridwell and Carmine Infantino’s 1966 giveaway strip to Denny O’Neil and Adams’ introduction of the modern era Joker in 1971. A later O’Neil piece is from a series with a deliberately comic tone, but a teaming with fellow madcap the Creeper hasn’t aged well, despite the novelty of it being the one story in which Batman doesn’t feature.

Rogers’ 1976 collaboration with Steve Englehart is the most iconic material here, and still a perfect blend of madcap eccentricity and murderous intent, stylishly rendered, with Englehart’s Batman a grim and rational predator. A variation on that is provided by Bob Haney and Jim Aparo, a detective mystery with the hook being the Joker’s innocence, working to a fine revelation before dropping into a disappointingly arch master plan. Why don’t crooks just shoot Batman?

For all the enthusiasm of the selection, this isn’t a collection to read in one sitting. However iconic the Joker may look, the visuals aren’t always matched by story quality, and the 1950s and early 1960s section occupies over a hundred pages, more than a third of the book. During this the eccentricity of a ridiculously earnest Batman giving crime classes or as a circus acrobat wears thin. It should be noted, however that ‘The Joker’s Utility Belt’ by David Vern and Sprang formed the basis of a 1960s Batman TV show episode.

Waid’s afterword is an enlightening run through of other Joker stories, and unusually frank in admitting there have been stinkers over the years. Since publication many missing credits have been verified, and the Grand Comics Database provides an up to date listing.

This anthology was considered viable in preparation for the release of the 1989 Batman film, featuring Jack Nicholson’s star turn as the Joker, and comes in several editions. DC published both hardcover and paperback volumes, while Warner Books also issued a mass market paperback for bookshops in the days before graphic novels reached them. In the UK Hamlyn’s edition served a similar purpose, and Longmeadow Press retitled the anthology Stacked Deck for their limited edition, purple vinyl covered hardback.