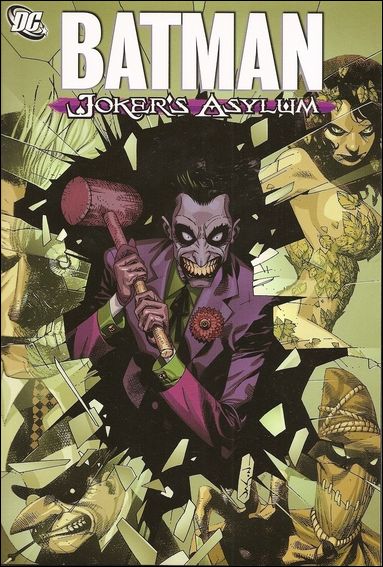 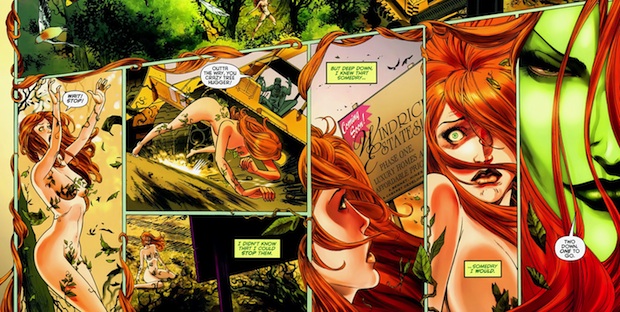 Joker’s Asylum is a compilation of five short stories, each centred on a specific villain from Batman’s rogues’ gallery. As suggested by the title, the Joker acts as background narrator through each. The villains included are the Joker himself, appearing in the first story and then throughout to introduce and conclude the others, the Penguin, Poison Ivy, Scarecrow and finally Two Face. The creative team changes with every chapter, each providing an interesting depth and twists to the well-known characters.

Although drastically different, focusing on various themes from love, grudges, corruption and morality, each story reminds us why these villains are so popular, but also what it is that drives them to be villainous. Poison Ivy’s and Penguin’s stories are particularly gruesome, but each ends on a chilling note, or at least would if not often interrupted in typical Joker fashion with a humorous finale.

The final Two Face story by David Hine and Andy Clarke is particularly powerful, addressing why it is that Two Face differs from any other burn victim, and how his morals shape him. An ex-firefighter, left similarly deformed, tries to reach out to Two Face, only for the villain to adopt him as a new target. Holman is forced to make the difficult moral decision between saving his hero Batman, or saving his lover. The finale, fittingly for Two Face, is multiple choice; good or bad, and involves the reader’s participation to determine the outcome. It is a wonderful and unique ending that perfectly captures the character’s psyche.

Like the writing, the artwork for each sequence is similarly unique and contrasted. Guillem March’s work on Poison Ivy (sample page) is particularly noteworthy using the seductress’ form and powers to visually reconstruct and reshape the narrative. Alongside representing their own villain, each artist also redesigns the Joker to fit around their story, offering a different perspective and persona perfectly suited to the ever-changing Clown Prince of Crime.

The material is further an excellent example of how Batman is created by his villains. It delves into their mentality, and shows the ways that the hero could easily be tipped to the darker, twisted side of morality. However, although Batman features in some stories, he is very much a supporting character, narrated from the side of villainy. Readers obtain a twisted perspective, potentially even becoming a villain themselves by the end of the comic. It is a fresh and interesting read and a worthwhile addition to any Batman fan’s collection. Volume two followed.