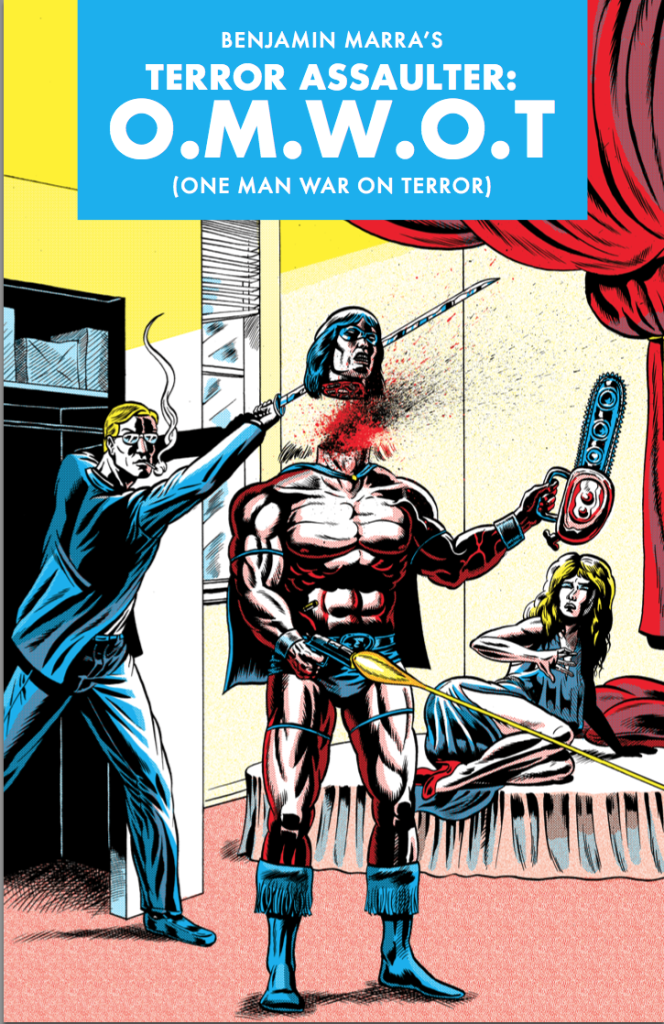 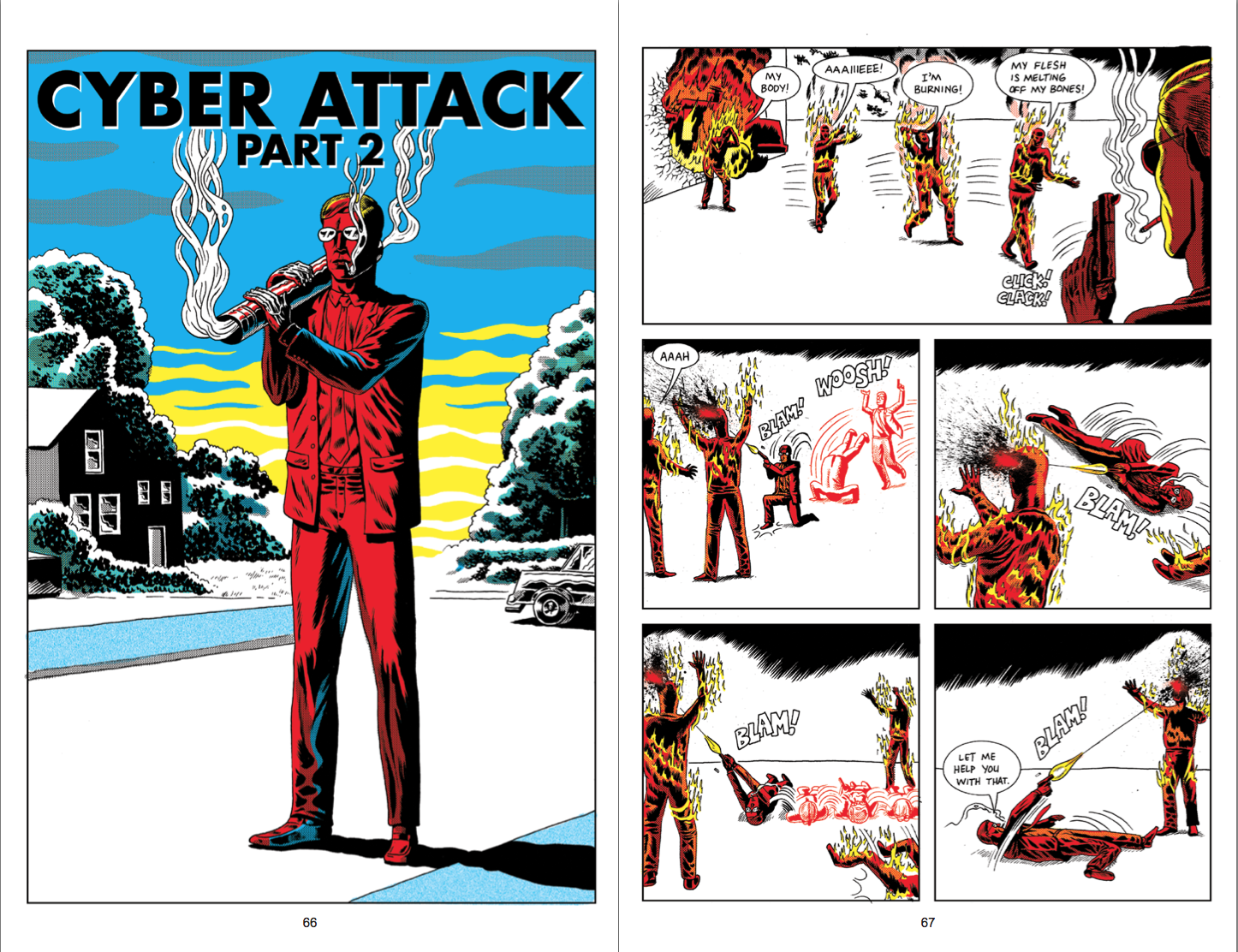 Readers may wonder how to take Benjamin Marra’s Terror Assaulter: O.M.W.O.T. (One Man War on Terror). Is it unselfconscious male fantasy, or arch satire?

The drawing certainly resembles the work of a fan-artist who’s learned to draw purely from comics, without ever observing a real person. Marra acknowledges the influence of the 1960s Agents of S.H.I.E.L.D. comics, but in contrast to Jim Steranko’s lithe, almost balletic figures, Marra’s look stilted, wooden and often double-jointed. His faces are stock expressions – mostly anger and teeth-gritted determination. Still there’s an increasing suspicion he’s affecting all this, and he captures Steranko’s over-the-top motion. The straight primary colours work here – the clarity adds to the pace, and there are some genuinely powerful images.

O.M.W.O.T. is an armed government operative – it’s James Bond USA style, and taken to its logical, destructive conclusion. The acronym is a nod to Jack Kirby’s One-Man Army Corps, or OMAC – a cyborg fighting machine, although no Kirby comic encompasess this level of bloody violence. Bond, while ruthless, is also tidy, with a British sense of decorum. He minimises the mess needing cleaned up. O.M.W.O.T. on the other hand is a veritable glutton for slaughter. He’ll take down the target, without worrying about the ‘collateral damage’ body-count. It’s taken to its most absurd degree when he happens to be on a plane hijacked by a group of ‘terrorists’ (i.e. violent people with guns, not officially sponsored by a government). He’s shooting left, right and centre, while the plane is strangely resistant to the physics of cabin pressure – even after the back end has fallen off!

It’s not only the drawing that’s stiff, as Marra applies the same exaggeration of Bond’s carnal encounters. O.M.W.O.T. is more uninhibited, going where the straight-laced Bond surely wouldn’t. Perhaps because there is nothing like this in S.H.I.EL.D., Marra seems to jump forward to the 1970s, channelling the implausible ‘pin-up’ girls of Bill Ward, and Guy Colwell’s steamier moments. The result, incongruously, is a greater realism in these scenes. The text also has a so-bad-it’s-good quality as characters redundantly tell us what we’re seeing, and yell variations of “AAAIIIEE!”

So is this naive fan art, or arch satire? It becomes clear it’s the latter, but Marra enjoys keeping us guessing. The deadpan approach recalls the early Judge Dredd, when – as the creators put it – the joke was on the po-faced, authoritarian Dredd, but also on some of the readers. It also has the provocative boundary-pushing of Sacha Baron-Cohen, when his gauche ‘foreigner’ Borat tells a stadium full of real Americans that he admires their “war of terror”

O.M.W.O.T. is as terrifying as his foes. The blurb from publisher Fantagraphics presents this as a satire on American masculinity, and that proves true – the story visits some quite unexpected places. You won’t guess the ending – it’s clever, funny, strangely poignant, and subtly telling of O.M.W.O.T.’s relationship with authority.

As a satire of America’s foreign policy, it’s not going to change the minds of any decision-makers, but it’ll give the rest of us some respite from worrying about it. It’s perhaps not the next step for people who’ve just discovered that graphic novels really can be deep and sensitive, but Fantagraphics are to be applauded for continuing to publish new work that can surprise and confuse, before finally impressing.