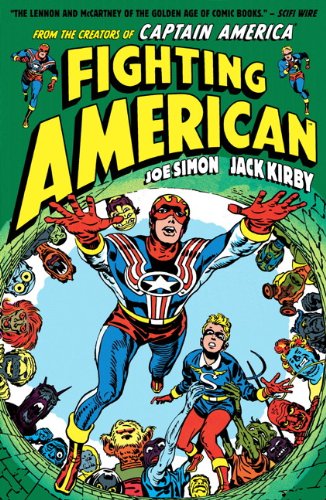 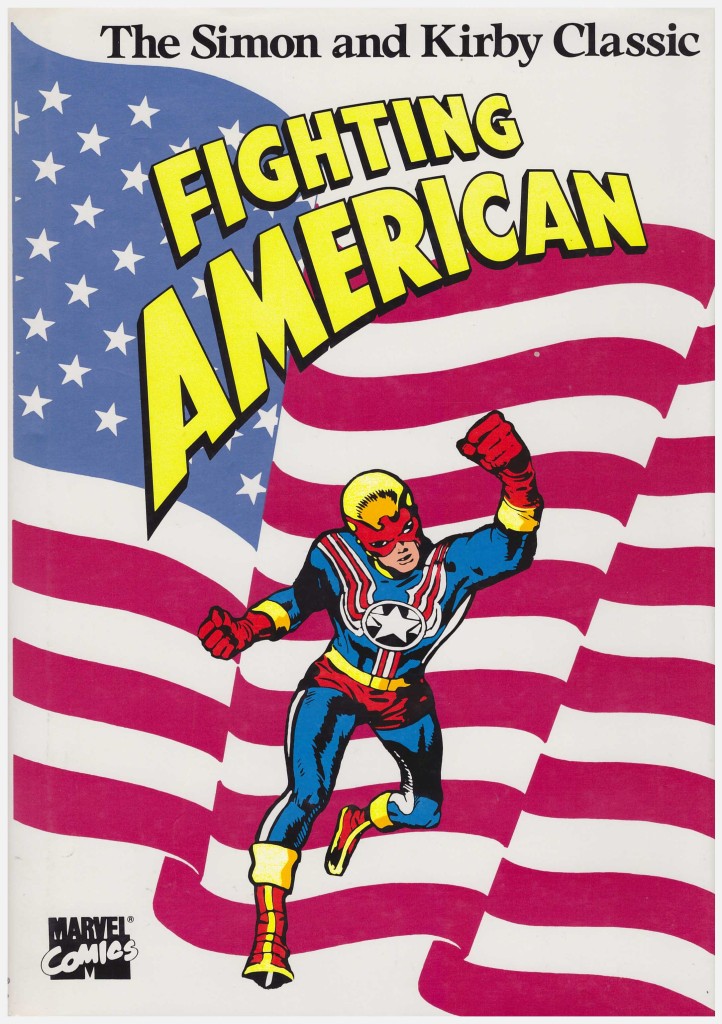 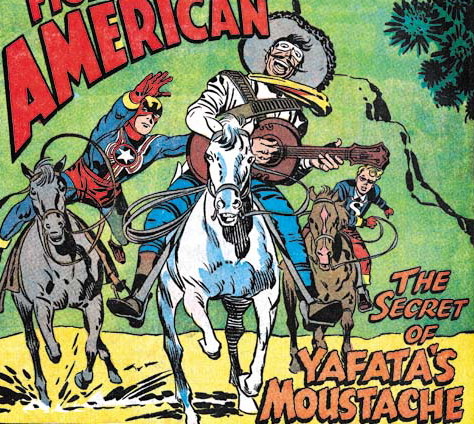 In 1940 Joe Simon and Jack Kirby created Captain America, patriotism personified, a superhero wrapped in the stars and stripes punching out the Nazis, a bunch of thugs the entire world outside Germany could see as villains. Stories differ as to how, but Marvel ended up owning the character, and the creators were left bitter.

In 1954 they had another try. Anti-Communist fervour was being whipped up, so Simon and Kirby figured they could repeat their original scenario, tweaking it to avoid copying directly, and this time the ready-made villains would be Communists. So, weak Nelson Flagg is transferred into his dead brother’s athletic body, and continues his life as crusading journalist Johnny Flagg exposing Communist plots all over the country, while dealing with those responsible as the Fighting American.

The series lasted seven issues, all reprinted here, along with content of an eighth that remained unpublished for a decade. There’s not a lot of inspiration to the earlier material. It has the vivacity of Kirby’s art, but it’s stilted and predictable, betraying the contrived creation, and the constant diet of Soviet thugs and their allies spreading their evil doctrine lacks variety or subtlety. The occasional creative spark is apparent, such as when Simon and Kirby throw in the bizarre two-headed villain Double-Header. He has one coarse personality, the other refined, but is under-used in a tale played relatively straight. It pointed the way forward, though.

With the fourth issue Simon and Kirby vary the relentless commie-busting, supply all their villains with punning names, and have the Fighting American playing the straight man in a world of absurdity. It’s a far more satisfying concoction, and later the likes of Super Khakalovitch, the Sneak of Araby and Round Robin plague our hero and his ever faithful sidekick Speedboy. This was new for the comics of the time, and echoed a decade later in the Batman TV show.

The final tale is identifiably drawn by George Tuska, and towards the end of the book there are stories patently not illustrated by Kirby, although no other artists are credited. An article on the Kirby Museum blog considers these the only superhero work of newspaper strip artist John Prentice. It also reveals that some of the plots and layouts were lifted wholesale from elsewhere, and then given a whimsical twist.

Fighting American is worth a look for Kirby’s wonderful action storytelling, but even the satirical material hasn’t dated particularly well. Fast paced and fast-talking slapstick was a form of comedy on its last legs in the 1950s, and all-but extinct today. This just isn’t as much fun as its reputation suggests.

It might be presumed that the 1989 Marvel hardback edition is a more desirable purchase than the 2011 Titan Books paperback, but this isn’t the case. Reproduction techniques progressed considerably in the interim, and the Titan edition has none of the muddy pages that mar what’s supposed to be a prestige product from Marvel.