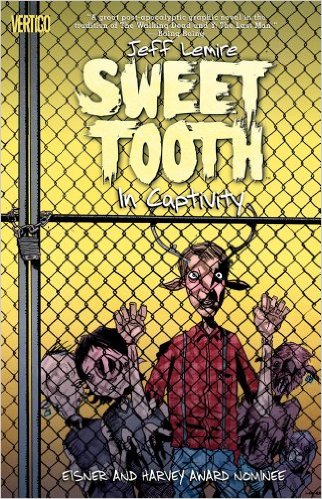 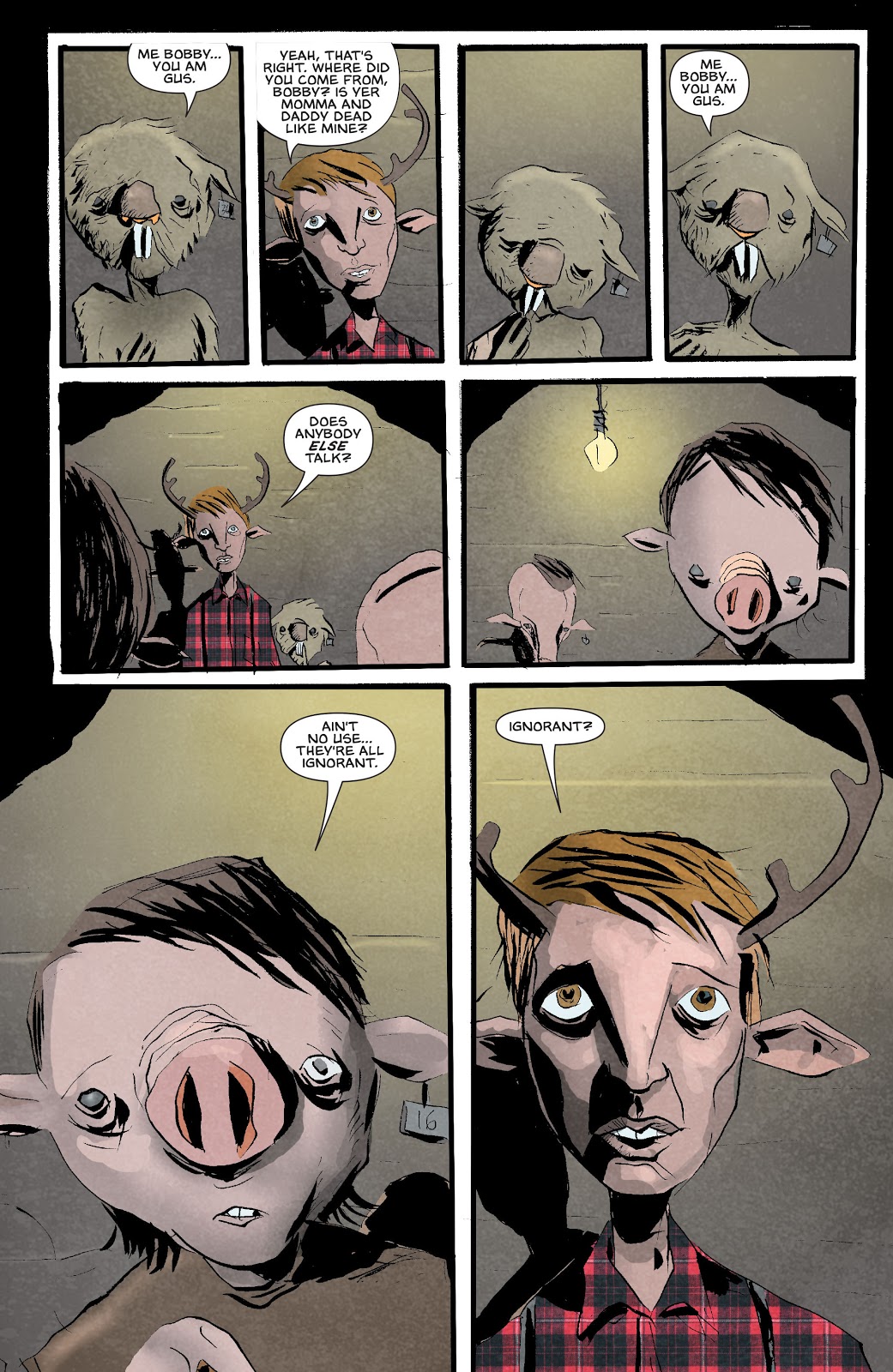 “I’ve always been good at fighting”, notes Tommy Jeppard as this volume opens, “It’s the rest of it I ain’t worth a damn at. But fighting I can do.” It sums the man up brilliantly and succinctly, instantly imparting his success in surviving the world as it is in Sweet Tooth, humans in pockets after disease wipes out most. Out of the Deep Woods proved he has a moral compass, and In Captivity lays out just what it took to divert him from his instincts.

Jeppard’s instant capacity to do what needs to be done when others might hesitate is integral to Sweet Tooth, and his past from professional ice hockey player to drunken wanderer without purpose is related over the chapters here. This is Jeff Lemire in home territory, defining tragic loss in beguiling fashion.

Since the disease that decimated humanity the only children born have been an array of animal hybrids, Gus among them, a ten year old boy with the antlers and facial features of a deer. Now in an internment camp, his companions are similarly afflicted and possess varying degrees of intelligence. Pig-faced girl Wendy can communicate, beaver kid Bobby is more limited.

Almost all the remaining cast with a significant part to play in the remainder of the series are introduced in In Captivity. The camp is run by Douglas Abbot, a festering, violent bundle of resentments, who considers his brother Johnny, maintaining a better nature, weak and useless. The camp has a resident genetic scientist, not above dissecting afflicted children, yet still with a spiritual side. Rounding off the cast, although with only a slim role here, are Becky and Lucy, seen in the previous book.

Dr Singh is the key character as far as progressing the story is concerned. His open-minded spirit of discovery permits inhumane acts, as at his core is desire to learn what’s happened to humanity. Gus is an anomaly in several respects, and Singh’s loyalty is to discovery, not Abbot. He’s interested in the journals kept by Gus’ father, and in interpreting the odd dreams Gus has, which do have a later relevance.

Lemire’s leisurely style of storytelling isn’t to all tastes, and at first glance there’s no great appeal to his art. Look more closely, though, and it’s enormously expressive. Lemire’s wide-eyed characters display what’s not spelled out in the text for a true synthesis of story and art. Likewise, his apparently slow method of delivering plot prioritises character. Open your mind, and your taste will follow.

This and the series opener are now collected in Sweet Tooth Deluxe Edition volume one, and the next book is Animal Armies.