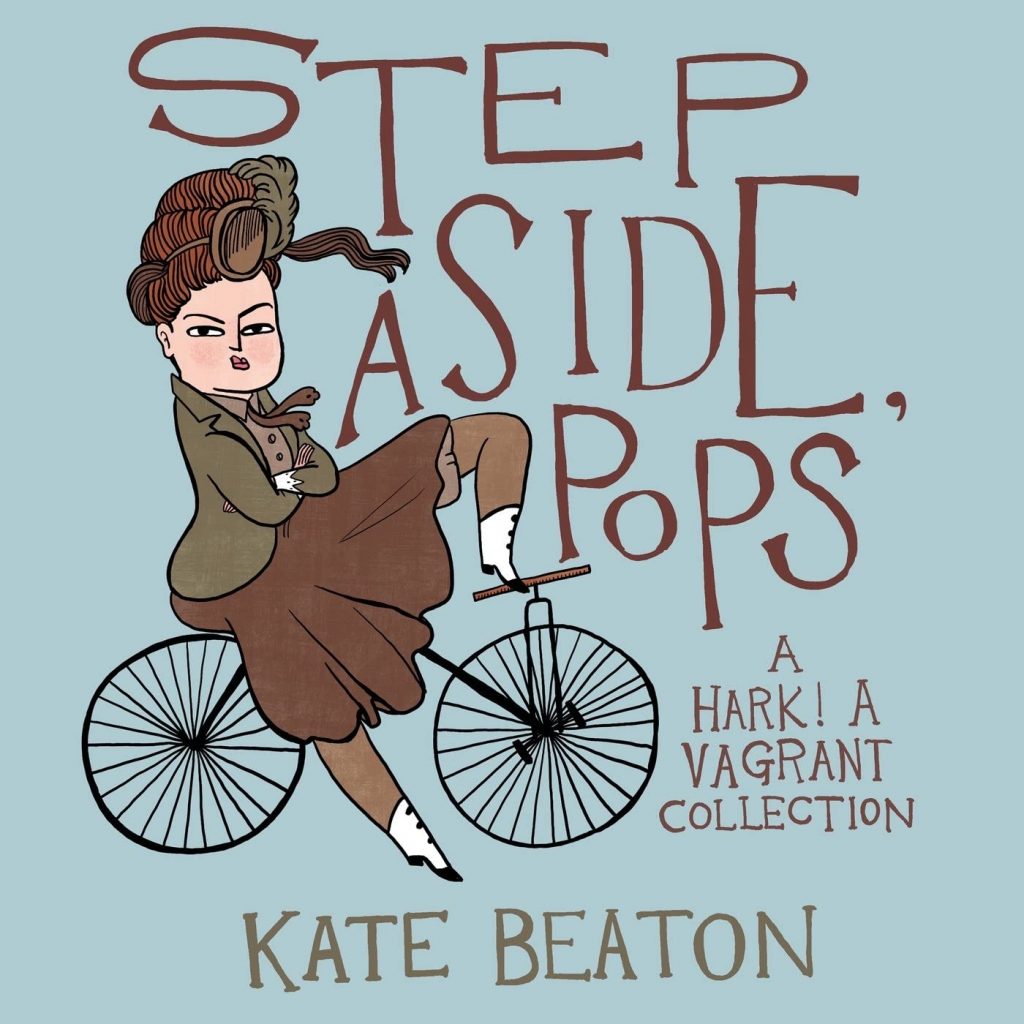 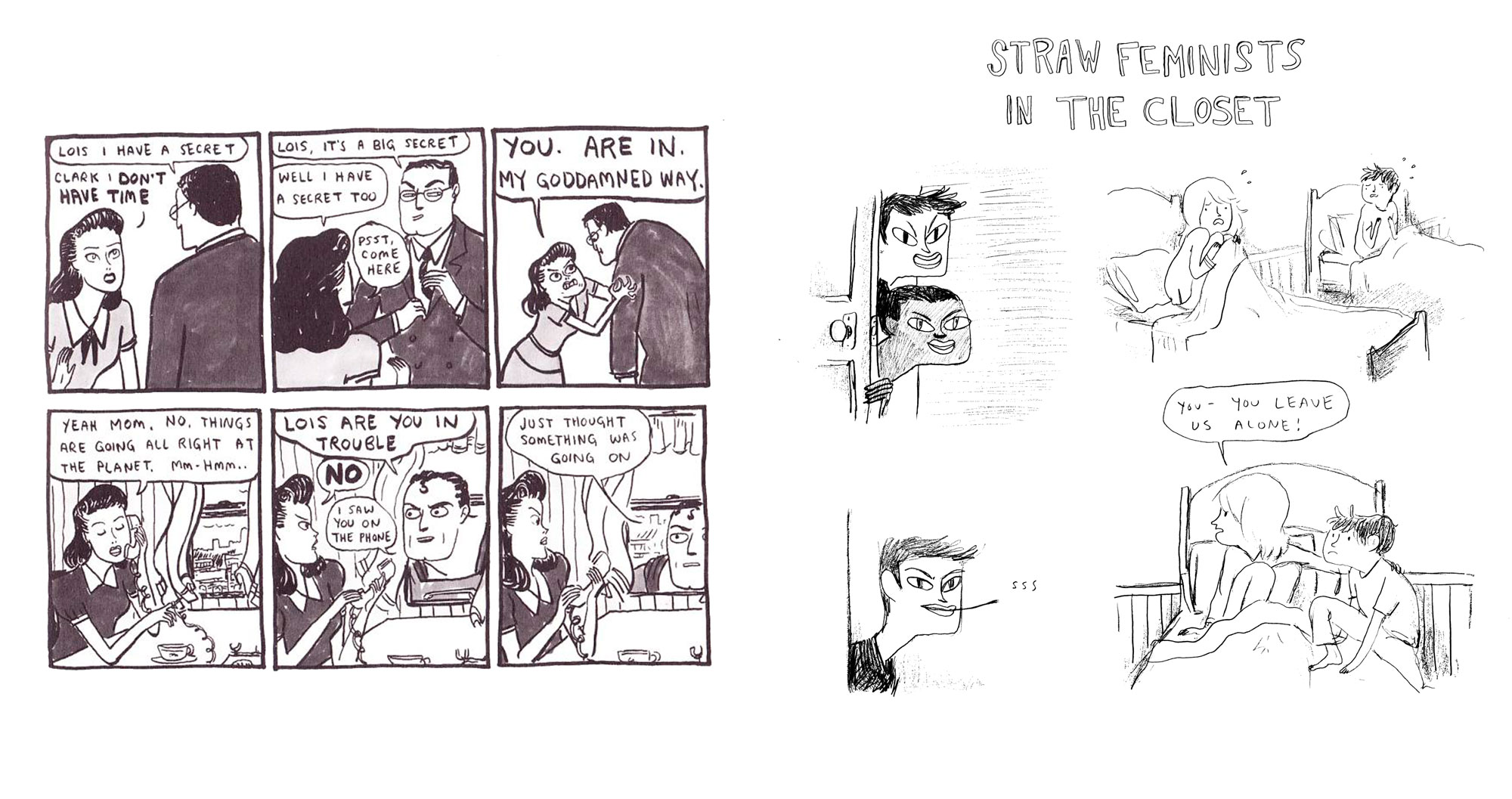 Step Aside, Pops collects more strips featuring writer/artist Kate Beaton’s irreverent take on historical figures from the worlds of literature, politics and art, originally published as webcomics. Her parodies of situations normally treated with devotion and reverence or elevated as high art are very silly, but it’s a focused kind of affectionate silliness that lands especially well if you know the premise or person she’s mocking.

In this book, as with the previous Hark, a Vagrant!, Beaton adds a line or two of wry commentary under some strips. These aren’t as detailed this time, and there are no paragraphs of discussion about the person or topic, laden with more jokes. This is a shame because Beaton riffing on a situation is very funny and her observations both reveal a bit more about the person behind these ideas and add context to the jokes. However, presumably readers who understand where she’s coming from after the first book don’t need as much hand-holding here. She does explain the cover title and image, which was inspired by the turn-of-the-century enthusiasm for the new invention of bicycling among women and the outrage this generated in newspapers from men who thought this shocking and inappropriate. “Good Heavens, it’s that awful Velocipedestrienne” exclaims a man, wide-eyed at witnessing a woman riding a bicycle toward him. There’s a reproduction of an actual newspaper cartoon from the 1890s next to Beaton’s own further extension of the encounter where she crashes into him. “You see me rollin up pops you step aside” she says with a cigarette rebelliously angled from her mouth.

Alongside old-timey fan-favourites such as Napoleon, Wuthering Heights, pirates and classical composers there are plenty of contemporary jokey situations such as a retelling of Cinderella where her Fairy Godmother grants her both beauty and a ripped physique, so pumped she doesn’t need a carriage: “is that water?” she asks a waiter at the ball, “I jogged here dude, I need major hydration”. Superhero parodies also feature, with Lois Lane trying to break big stories while hounded by Superman to notice him, and the tedium of being Wonder Woman with nobody quite sure what her mission is.

The stylishly loose drawing adds a great deal to the humour, giving everything a spontaneous immediacy as if the ideas have gone directly from Beaton’s brain to the page as fast as she could think them. This works especially well on strips like ‘Straw Feminists’ with a sketchy line for the caricatured subtext of two demonically fork-tongued nymphs who horrify parents by telling their children the truth about the world. “Oh no! Feminists in the underwear section!” says a mother who is buying  her daughter her first bra. “You don’t want a training bra little girl” one of the pair says. “You want all men in the world to be dead. Come with with us to the moon” …”where we’ll blow up The Earth”. The rapturous expression on the tween girl’s face is hilarious.

Beaton has branched out from these areas to create more personal and autobiographical material so there have been no further collections since 2015, but all strips from this and the previous selection, plus many others are archived on her website. 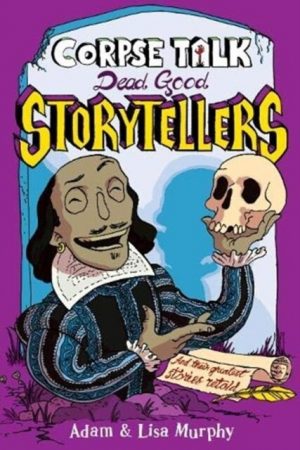 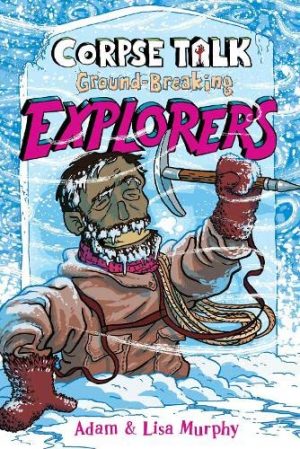