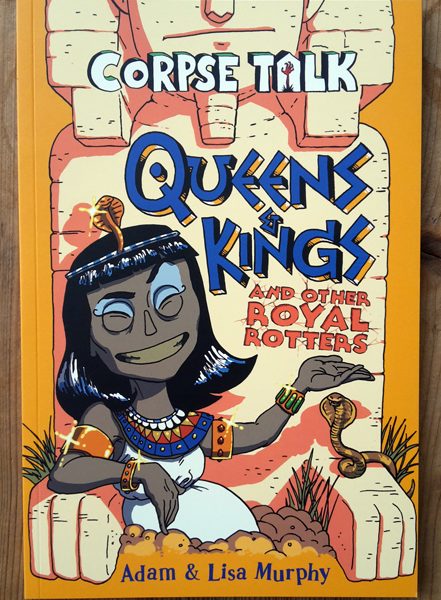 Adam Murphy’s Corpse Talk collections have been delightful since the start, and Queens & Kings doesn’t break a successful streak. The title gives interesting pause for thought by the simple method of reversing the more usual phrasing of Kings and Queens, although the balance of subjects is still firmly male, when dealing with royalty a consequence of historical repression rather than anything else.

Pleasingly, there is no messing with a winning formula. The premise is that Murphy interviews the corpses of the great and the notorious, putting words into their mouths and humanising his subjects via imagined conversation as they explain themselves. Murphy’s research is always thorough, and everyone from child to adult will learn plenty of fascinating, and often gruesome, historical facts. The faint hearted should skip the Moctezuma II and Marie Antoinette segments. And who knew the ‘Shaka’ in Shaka Zulu referred to an intestinal parasite? Murphy also busts some myths. Did King Alfred really burn cakes while in hiding? Does Richard the Lionheart merit his public persona? Murphy’s very good at recasting interviewees in terms understood by 21st century children, likening Cleopatra to a modern day artistic diva, and having Nero refer to a P.R. disaster. The good humoured approach disguises a great talent for lobbing in confusing bits of history in an understandable way. Many place names and nationalities having changed considerably over the years, yet are rendered accessible by Murphy’s clear cartoons and diagrams, one explaining just how the Angles and Saxons came together.

The Other Royal Rotters subtitle more than hints at the content. While not everyone interviewed is a murderous rogue, there’s no place for considerate monarchs overseeing decades of relative peace and stability. Well, other than Charles II. Plenty of the earliest monarchs caused their own trouble by starving populations in order to construct multiple statues of themselves, and others came to a sticky end by refusing any concessions when the population at large became restless. An extended sequence covers Henry VIII followed by his six wives, imaginatively presented as an out of control Jeremy Kyle show.

What raises Queens & Kings (and the previous Ground-Breaking Women) ever so slightly above earlier books is that a minimum of six pages are now devoted to every subject, four pages of interview followed by a detail packed spread of relevance to them or their times, often montage style, and always with plenty of surprises. Best of the spreads is the step by step explanation of the Bayeux Tapestry, with considerable justification considered a comic, but nevertheless requiring a lot of decoding.

Corpse Talk might appear in a children’s comic, but like all the best material made for children adults should love it. It’s not entirely clear, but we think Lisa Murphy’s co-credit is on the basis of the colouring. Ground Breaking Rebels is next.