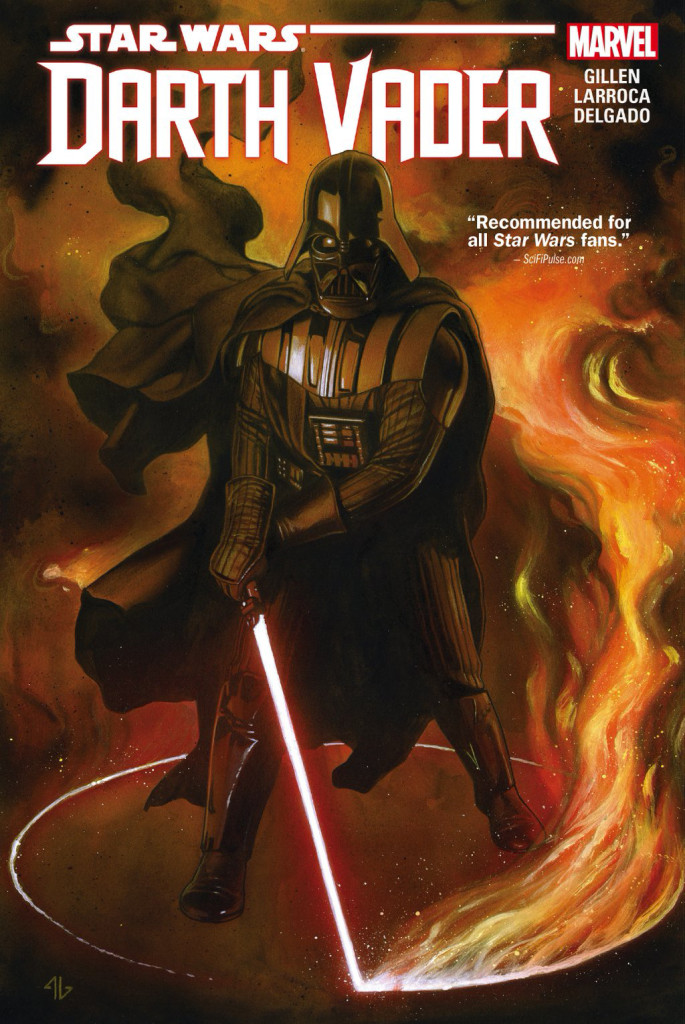 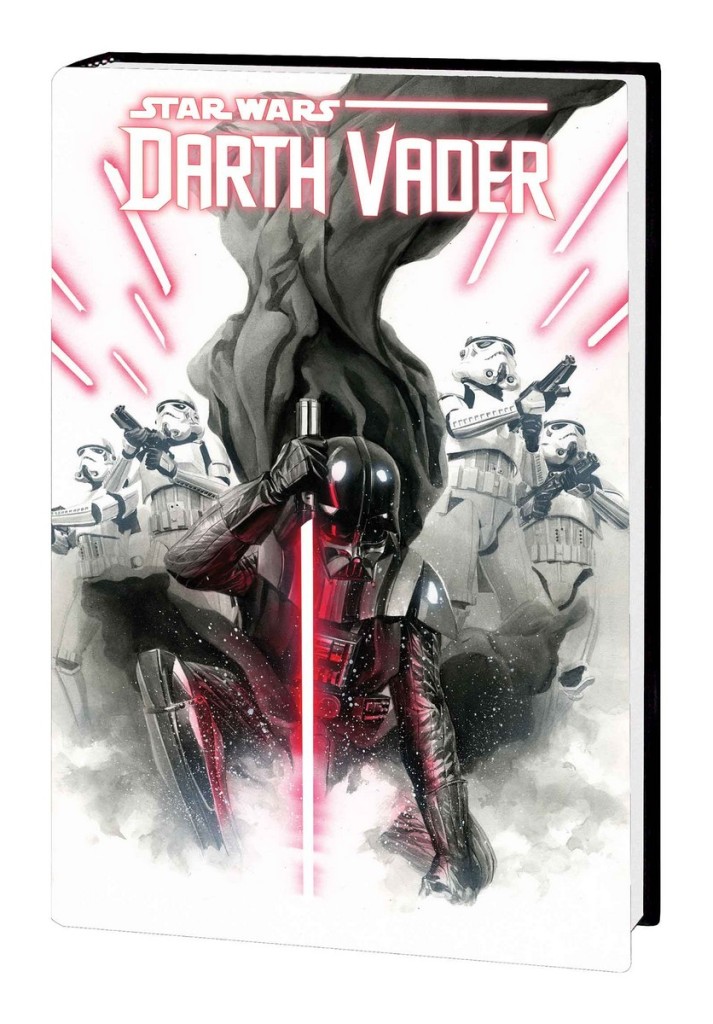 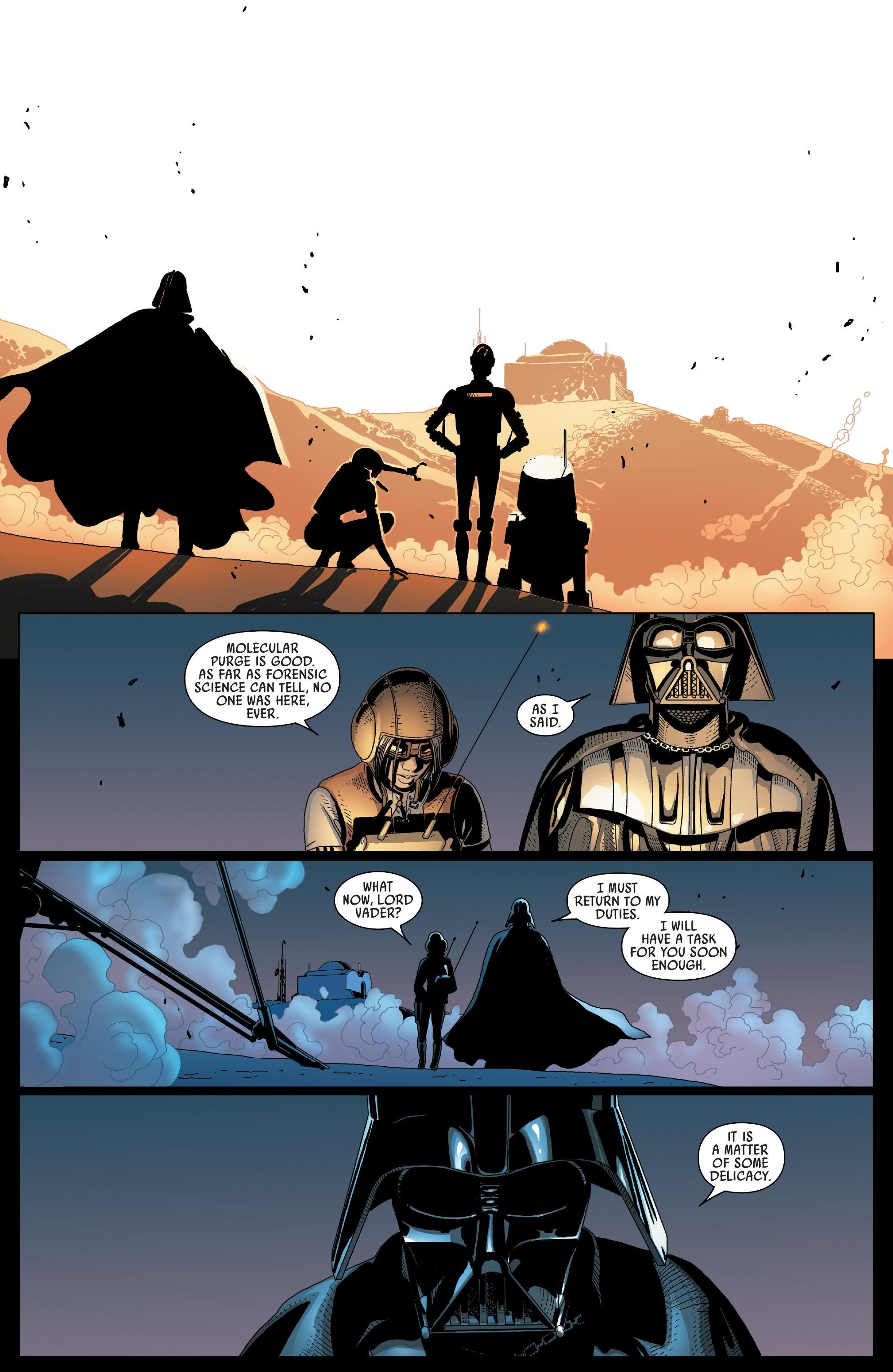 This visually appealing hardcover edition collects the first two books in Kieron Gillen’s and Salvador Larroca’s ongoing Star Wars: Darth Vader series. Part of a franchise re-genesis after Disney acquired Star Wars from George Lucas, this is a smartly handled imagining that focuses primarily on Darth Vader in between the end of A New Hope and the beginning of The Empire Strikes Back.

Vader starts with the political and propaganda fallout caused by the destruction of the Death Star, of which Darth Vader is the sole survivor. Emperor Palpatine is furious, demanding that Vader clean up the mess and repair the damage the Rebel Alliance’s victory has caused to the Empire’s reputation. Vader has his own agenda: finding the force-sensitive pilot who brought down the Death Star and discovering who the Emperor’s mysterious new agent is. Enter Doctor Aphra, a rogue archaeologist specialising in droids, and her own psychotic droids Triple-Zero and BT-1 (Bee Tee). Think Indiana Jones’ Belloq but a whole lot prettier. New and familiar faces alike enter the story, Vader facing down attempts to replace or kill him.

Shadows and Secrets finds Vader on Luke’s trail and discovering the truth about their connection to each other. Vader’s new Adjutant, Thanoth, is keeping a close eye on him while they take down the crime lords operating on the Outer Rim. Meanwhile Doctor Aphra, her droids and the bounty hunters work behind the scenes to keep Vader’s past buried.  Except that the Emperor’s agent, geneticist Cylo V, and his creations are keen to replace Vader as the Emperor’s right hand by any means necessary. In this game of wits, power, subterfuge, and betrayal, can Vader stay ahead long enough to emerge the victor?

Star Wars fans can rest easy because as it turns out, this a very good addition to the franchise’s canon. It’s obvious that Gillen is having a blast writing, a touch of fanboy enthusiasm ensuring that he does this justice. The added bonus is that the series starts well and ramps up as it progresses, both Gillen and Larroca’s work consistently improving. The familiar characters are all well rendered while Aphra, Triple-Zero, and Bee-Tee are excellent additions to the franchise, even if the pace is blistering and in the blockbuster tradition. This might not be to everyone’s taste but it works well here because Gillen is reverently filling in the blanks between films.

Larroca’s European style fits this surprisingly well, the subtly displayed sound effects making their point without dominating frames. Vader relives painful memories as his pursuit of Luke takes him back to the planets and places he visited as a youth, his response to these quite cleverly captured by Larroca through the use of detailed surroundings and a superb contrast of colours. While the characters are all artistically beautiful, not all convey emotions well (Aphra is an example). The upshot is that you know what the mood is, but when it comes to Vader you can feel his emotion oozing off the page. Considering that he constantly wears a mask, this is a spectacular feat.

The standard of illustration and writing in this series reboot has been good across the board, proving a sincere intention to honour the original titles while crafting new stories at the same time. The events here segue into the Star Wars cross-over event Vader Down, before continuing in Darth Vader: The Shu-Torun War.