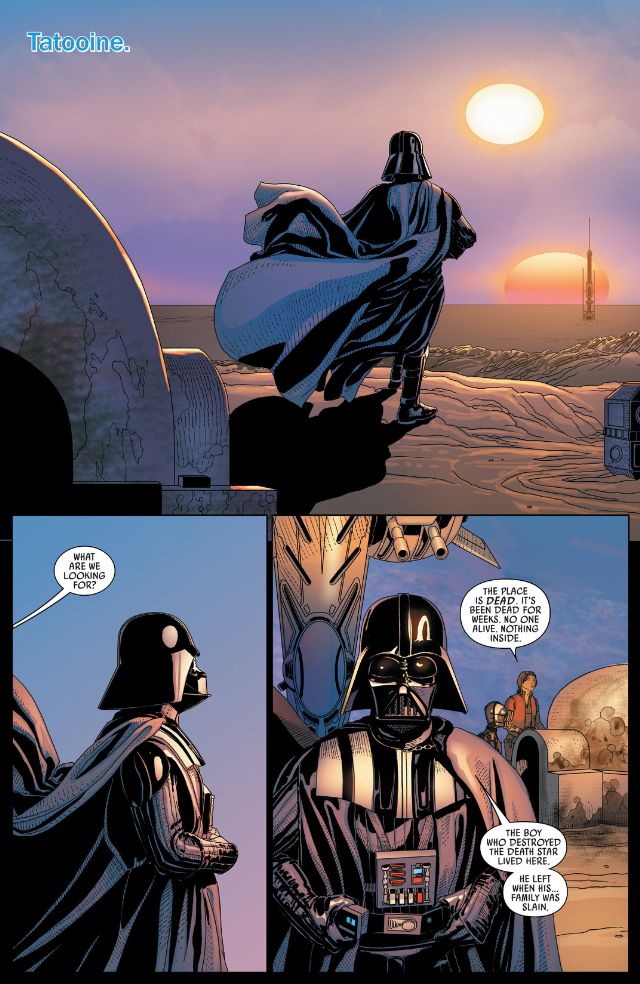 Having survived machinations to replace him in the introductory Vader, Darth Vader is victorious for the moment. With an uneasy truce between him and his new rivals for the place of Palpatine’s apprentice, Vader is pointed towards the crime lords of the Outer Rim planets who have grown bolder since the destruction of the Death Star. Vader is still determined to track down the force sensitive pilot who destroyed the Death Star and placed him in this difficult situation, whether he is permitted to or not. While he continues to build his unit of droids and bounty hunters with the help of Doctor Aphra, Vader makes sure no one can use his dark past against him even while under the watchful eye of his new Adjutant Thanoth, a meticulous and cunning mind not to be underestimated.  The way of the dark side is to reign with force but can Vader survive the mounting odds?

Writer Kieron Gillen and artist Salvador Larroca continue to build momentum. Gillen keeps the suspense ratcheted with some brilliant plot twists and adds some satisfying depth to Darth Vader’s character. Larroca’s illustrations were never shabby but he’s improved, utilising big frames and vivid colours to full effect. The difficulty with a character like Vader is that he wears a mask that hides his facial features, yet Larroca has somehow managed to capture the pain and anger that simmers underneath the surface. One sequence in particular catches his inner turmoil so superbly that it leaves a lump in the throat. Battles are still difficult to follow and aliens still have better emotional features than their human counterparts, but this has also improved slightly. The background details are very good, though it can be hard to tell when flashbacks start and finish.

Gillen and Larroca are producing a cracking story for fans both old and new, these events seamlessly segueing into the Star Wars crossover Vader Down. The Shu-Torun War is the next volume, and both Vader and Shadows and Secrets can be found in the hardcover Darth Vader Volume 1.