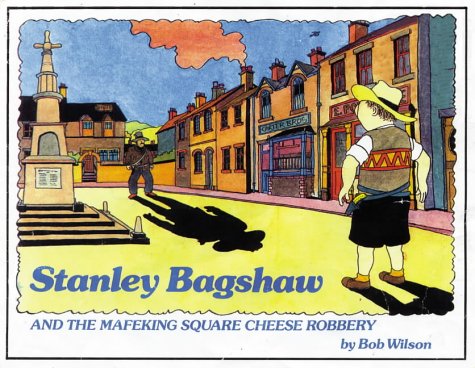 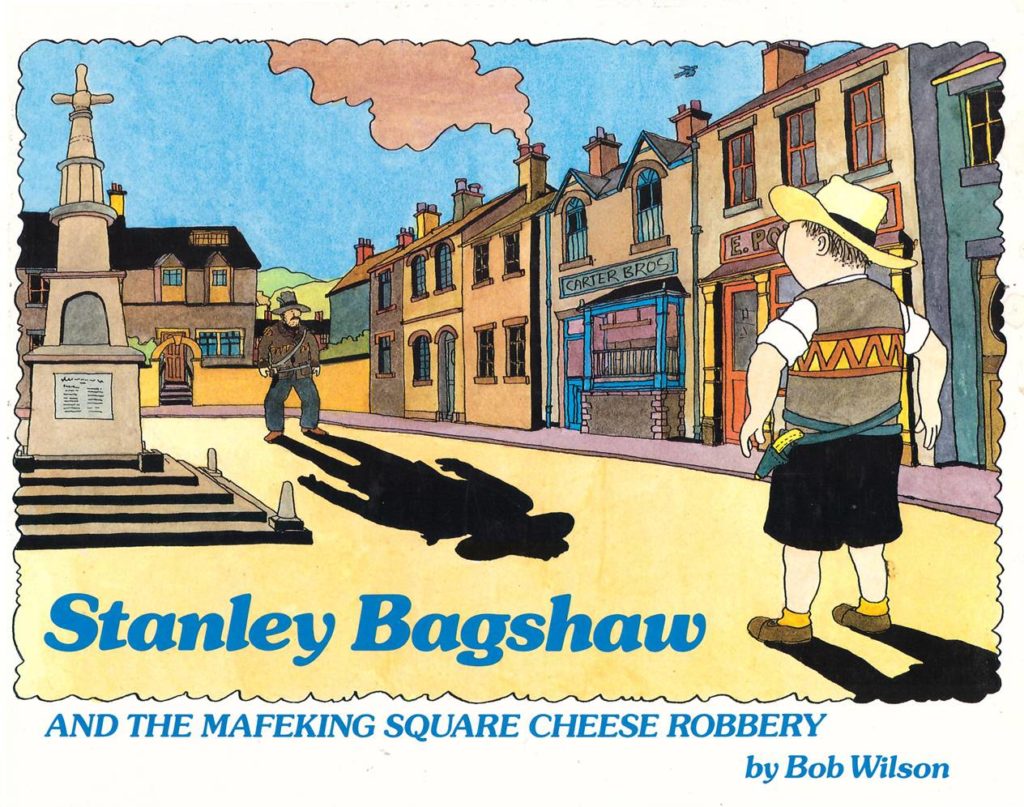 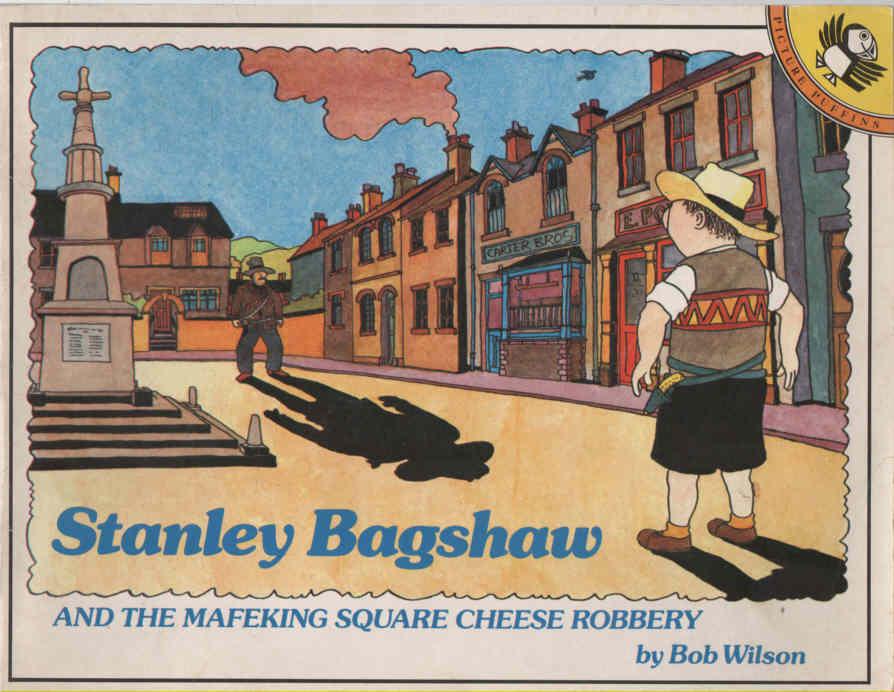 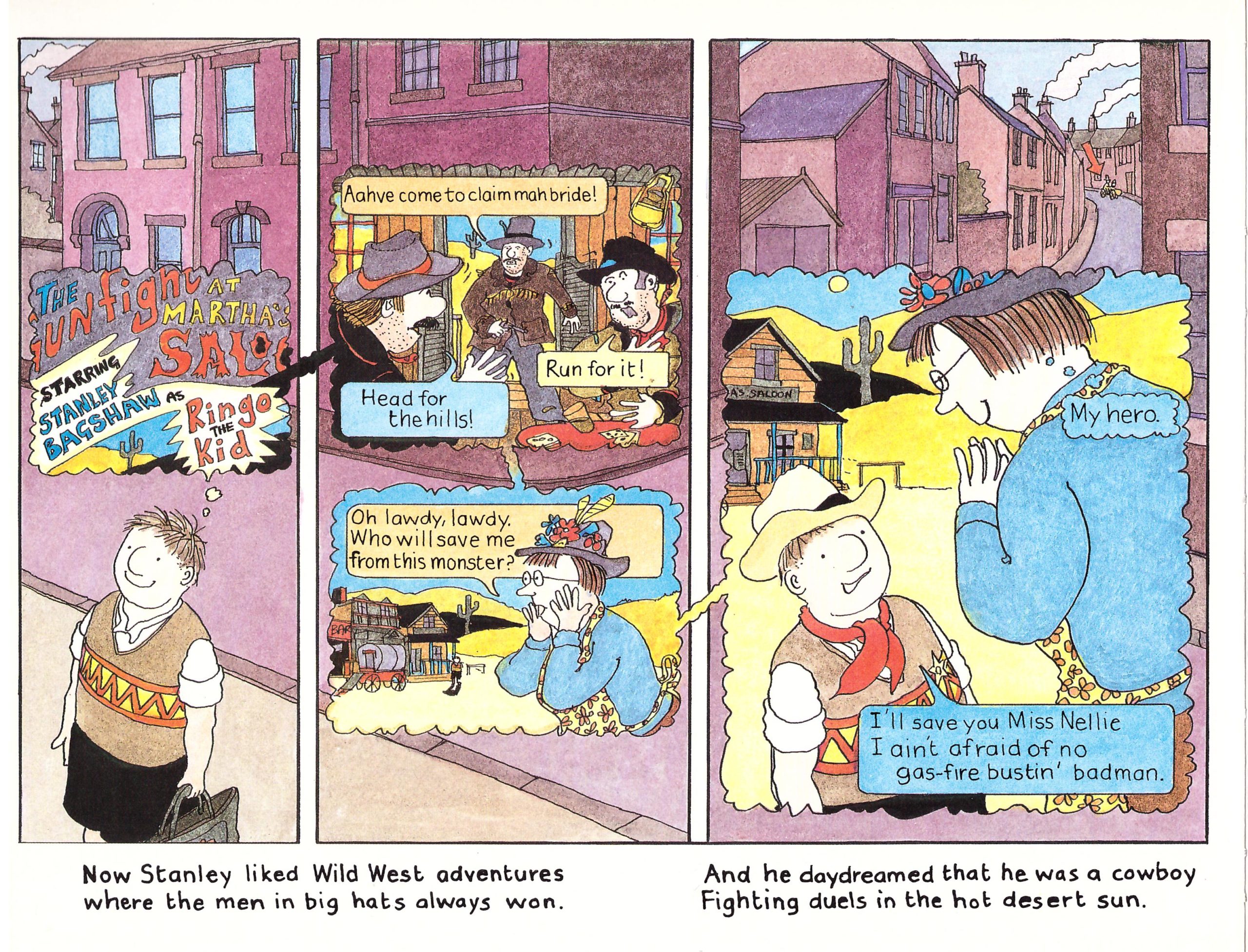 Bob Wilson’s third outing for Staney Bagshaw appeared in 1985, by which time Stanley had appeared in a series of six animated shorts, each running ten minutes. The Mafeking Square Cheese Robbery was first generated as one of them.

It’s a plot suited for TV with recognisable villains and a greater personal threat to Stanley himself, but it doesn’t play as well to Wilson’s strengths as an artist as the Fourteen-Foot Wheel or the Twenty Two Ton Whale did. The gentle humour, rhyming presentation and eccentric characters that graced the previous two books are present, but the beauty of the joyful rolling scenery has been diminished. There’s nothing of nature except human nature, as Stanley wanders the streets of Huddersgate instead, and in smaller panels, these necessary to cover the extended plot required for ten minutes of animation. Time is further spent establishing the villains and there is a charm to Stanley comparing one to the Western fantasy he’s just had when passing the Huddersgate cinema. Also well handled is the cover reversing the viewpoint of a scene within.

Stanley’s volunteered to pick up some groceries for a neighbour while she waits in for the gas man to call. It feeds into his helpful nature and the sense of community Wilson has fostered since the start of the series, and a clever feature is the way Wilson has Stanley forget the shopping list. Children being read the story, or reading it for themselves, will pick up on this, and it introduces almost as much suspense as the threat of Big Sidney and Specs.

Once was nice touch, twice could have been a coincidence, but this third ending confirms a pleasing series signature. Just as Lucky Luke always ends with Luke riding off into the sunset singing that he’s a lonesome cowboy a long way from home, or Cacofonix never sings at the feasts ending Asterix, so Stanley returns home to his Gran for tea he claiming nothing ever happens to him. As ever, the old fashioned radio plays out the truth of events.

Next up for Stanley is the matter of The Short-Sighted Football Trainer.