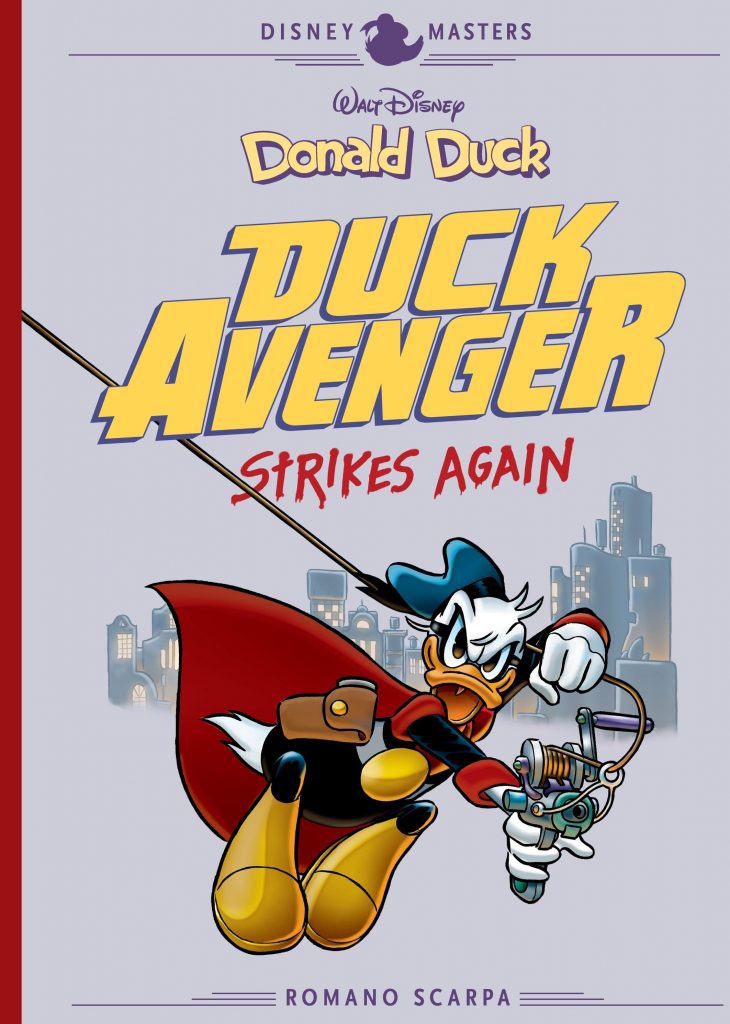 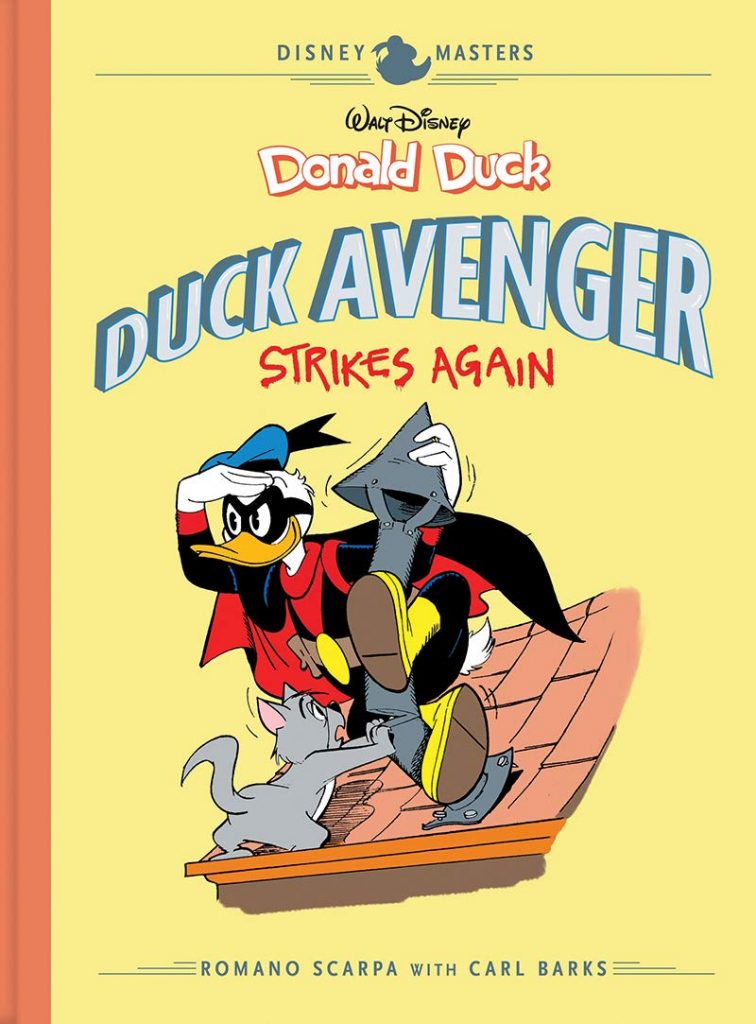 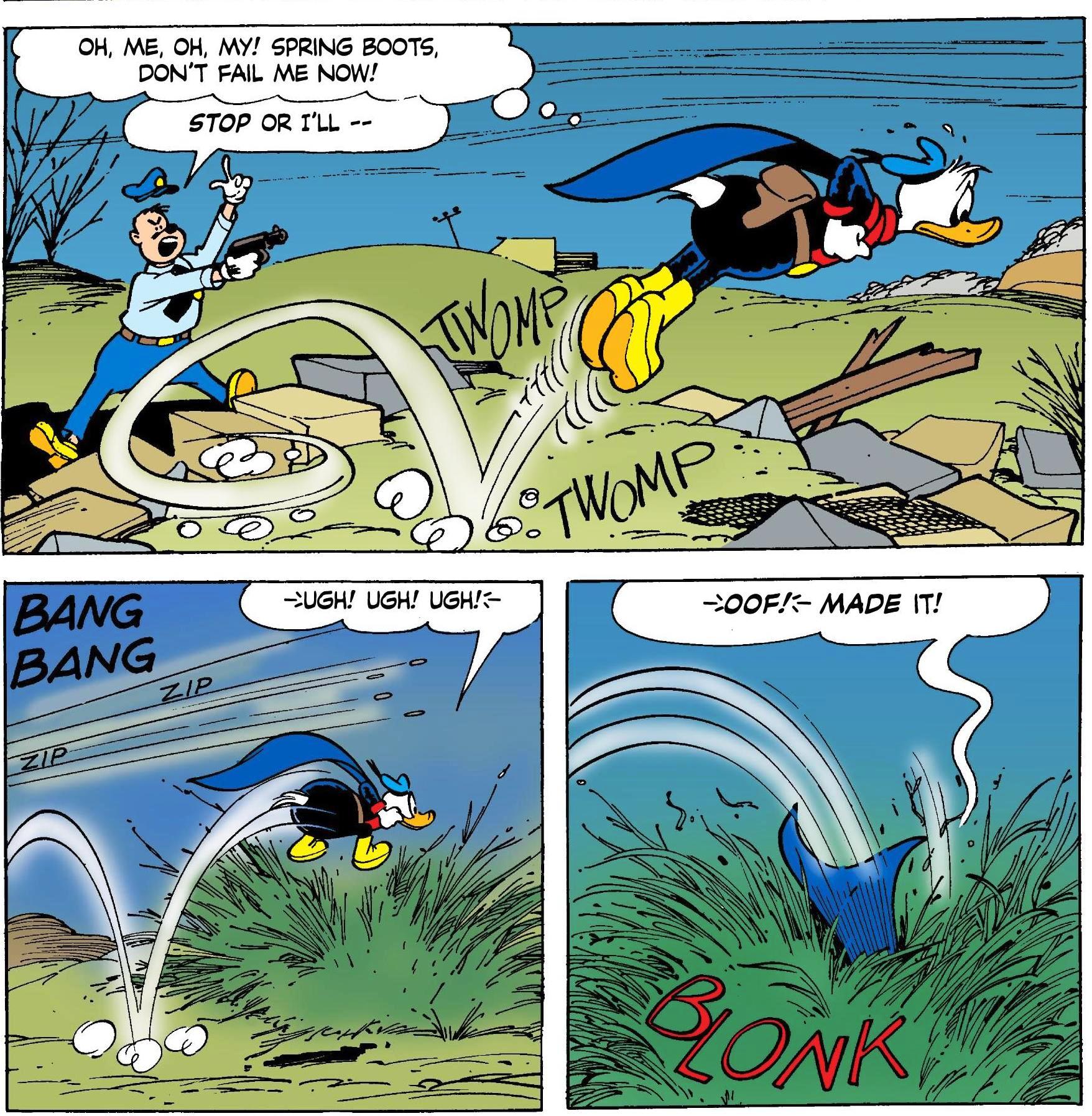 While Romano Scarpa is better known as the Mouse Maestro for his work with Disney’s Mickey Mouse, he was equally as comfortable writing and drawing the Duck family. This wasn’t limited to Uncle $crooge or Donald Duck either, often producing stories of little known characters with a smattering of them featured here in the eighth Disney Masters book.

While it’s Guido Martina who co-created the Duck Avenger (Donald Duck’s alter ego) and pens the titular opener ‘Duck Avenger Strikes Again’, Scarpa often illustrated stories over the course of Duck Avenger’s 50 year run. Created when Italian readers requested that Donald finally get a lucky break, he was initially a vigilante taking out his resentment on the establishment before becoming a caped hero. Imagine his irritation when he spots the Duck Avenger flying by his window that night while he’s in bed. This imposter is causing quite the stir with everyone suddenly noticing DA’s resemblance to Donald. Worse still, Uncle Scrooge is using the Avenger’s appearance to boost custom at his wax museum. Donald is furious and sets off to find out just how Scrooge is doing it in a fun story. Scarpa pencils fabulous action inked with clear lines by Giorgio Cavazzano, the looney antics made to look doubly dynamic by jaw dropping flourishes. Produced in 1971, Scarpa’s talents have become even more impressive and bring the story to life in what is still a rare English appearance for the character.

In ‘Ellsworth’s Ornery Orphan’, Mickey reminisces on his adventures with his Mynah bird friend Ellsworth. Who should arrive just then but Ellsworth himself introducing Mickey to his son Ellroy. Ellroy is unlike his father, a hyperactive boy perceived as rude, so Mickey asks about his mother. Ellsworth informs Mickey that Ellroy is adopted and proceeds to tell him a tale involving the Foreign Legion, sky pirates and how he found Ellroy. As a story it’s alright, but placed after the fantastic ‘Avenger’ story lessens its shine. Written and pencilled by Scarpa with Sandro Zemolin inking, the art is far better, with Ellroy so full of energy and mischief you get tired just looking at him.

‘Tale of the Twisted Twins’ is credited to both Scarpa and Disney comics legend Carl Barks, though in reality Scarpa does all the work basing it on an idea by Barks. An essay inside tells how Scarpa and Barks met, Barks one of the few American artists who actually followed any Disney Italia output. Intrigued by Brigitta McBridge, Scarpa’s creation based on Barks’ own Glittering Goldie, Barks sent the Italian an idea a few months later. This is the result. Brigitta and the Beagle Boys are trying to get Scrooge McDuck’s attention, albeit for different reasons, while in a forgotten land a princess runs away to avoid being Queen. Scrooge is usually a skinflint but when he becomes smitten with Brigitta and starts spending money, Donald and the boys (Huey, Dewey and Louie) are really worried. A number of sub-plots spin around the main narrative, from money heists to broken hearts and mistaken identity. Despite having the right components this isn’t as adventurous as Scarpa’s earlier stories, yet it’s beautifully executed and illustrated. Years later it still feels as fresh as the day it was written.

While Scarpa’s writing here is not as efficient as in his early work, his artwork is incredible and worth seeing for any Disney aficionado. There’s even more delightful art to be witnessed in Mickey Mouse: The Ice Sword Saga Book I.