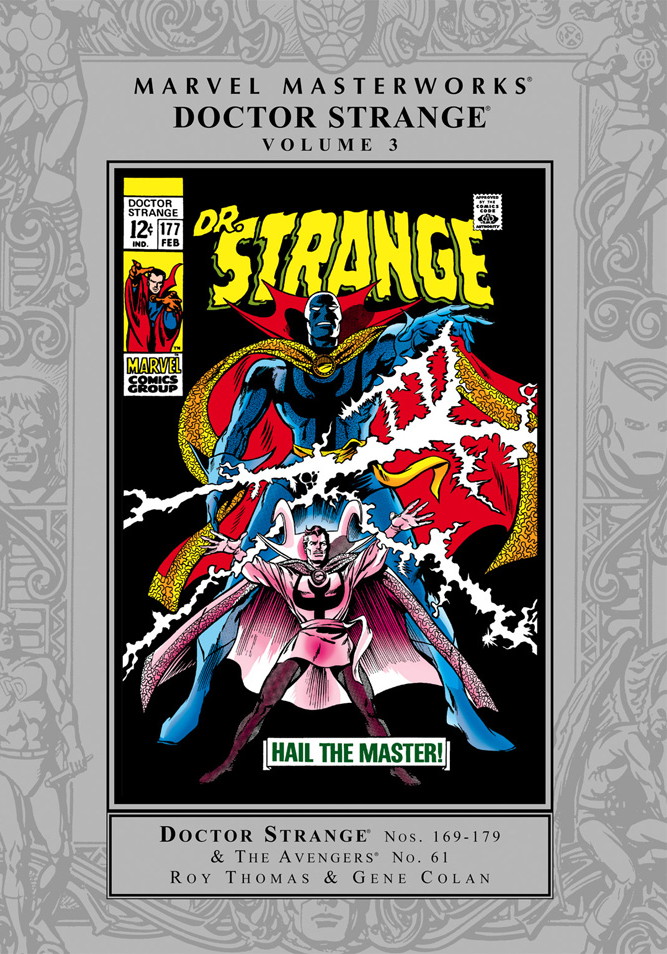 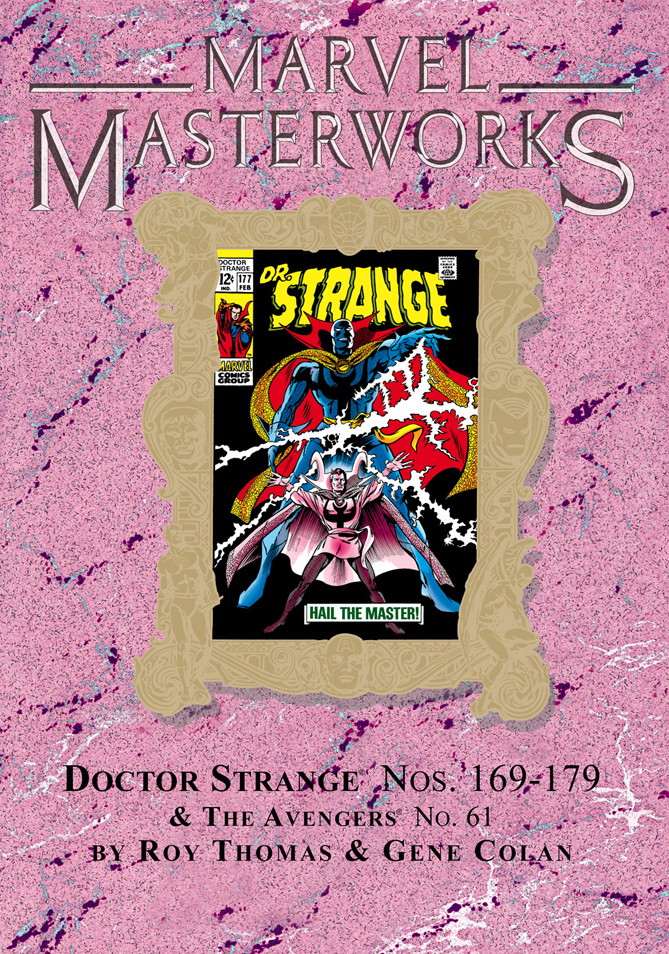 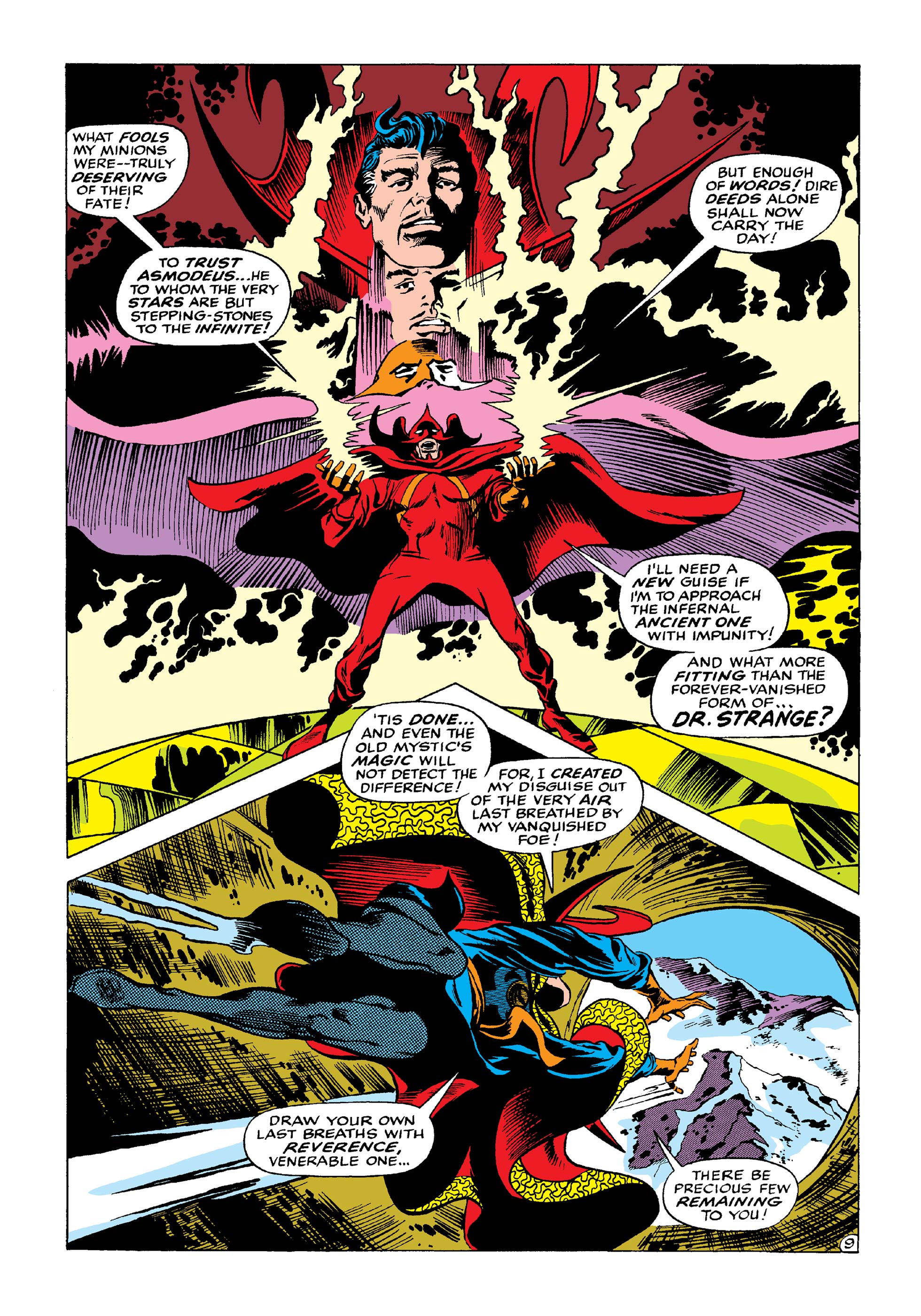 Doctor Strange wouldn’t exist without the innovative imagination of Steve Ditko, and his dazzling visualisations captured, perhaps even inspired, the 1960s zeitgeist of eastern mysticism and psychedelia. His abrupt departure was a blow for editor/scripter Stan Lee as he was surely harder to replace here than on the bestselling Spider-Man. Lee could no longer script all of Marvel’s expanding output, and the latter half of the previous volume showed a series in flux, as he tried to ensure a viable creative team.

This third Masterworks volume picks up towards the end of that process. Lee’s protégé Roy Thomas is now the regular writer, with Dan Adkins and Tom Palmer taking respectable turns mimicking Ditko’s gothic interiors and psychedelic vistas. By the third story, penciller Gene Colan arrives, so beginning the series’ second great run. Colan was already a veteran, latterly drawing Marvel’s (then) second division superheroes Iron Man and Daredevil, yet, Doctor Strange saw him break new ground for himself and for the medium. He starts well, and over his first three stories develops his signature style for the character. Ditko created a window into surreal, imaginary worlds, but Colan throws the reader through that window. His art is always highly kinetic, sending the eye darting around the page, here he adds some of the most daring page layouts ever. By the end of the book, he’s thrown away his set-square: the only right angles in sight are the edge of the pages. It’s a brilliantly dizzying reading experience, that in 1968 surely deserved to be called “far out”.

Palmer stayed as inker, and also goes from strength to strength over these pages, taking Colan’s dynamic pencils to a whole new level. Indeed, it’s hard to think of an inker that so enhanced other people’s pages, and the two would be an enduring team both here, and on Tomb of Dracula. Palmer would also prove a brilliant colourist for Colan, and it’s likely he’s responsible for the radiant, yet subtle palette here. Palmer adds a realism to the characters that makes the magical scenes all the more potent. In these pre-CGI days there was little to compare with these brilliantly visualised worlds, and Marvel’s current artists could still learn a lot.

Doctor Strange had started life in mystery/horror anthology Strange Tales, and this volume starts as he takes over the title. However, the extra page count didn’t necessarily help fledgling writer Roy Thomas. The retold origin benefits from the greater length, but other stories feel stretched. He also retreads familiar ground, with the return of earlier foes Nightmare, Dormammu, and Umar, plus Eternity, and competing love interests Victoria Bentley and Clea. Thomas eventually brings in his own characters, including The Black Knight, prompting a crossover with The Avengers, which is a logical inclusion here, but the wise-cracking dialogue jars, and the John Buscema art looks weak and dated beside Colan. Thomas’ main innovation was the bathos of everyday elements as Strange and otherworldly refugee Clea negotiate hippie-era Greenwich Village: cab rides and alleyways inevitably lead to perils. On the downside, this also triggered his identity-protecting masked revamp.

The peak Colan/Palmer art runs from the middle of this volume into Volume 4, with both volumes collected in the second budget black and white Essential Doctor Strange. or the luxury second Omnibus. Scores for each are brought down by the other, weaker, material. The prices sought for all editions reflect the enduring demand for these stories, though new editions may appear in the wake of the film. Colan and Palmer return in Volume 5, with a sustained run in Volume 6.