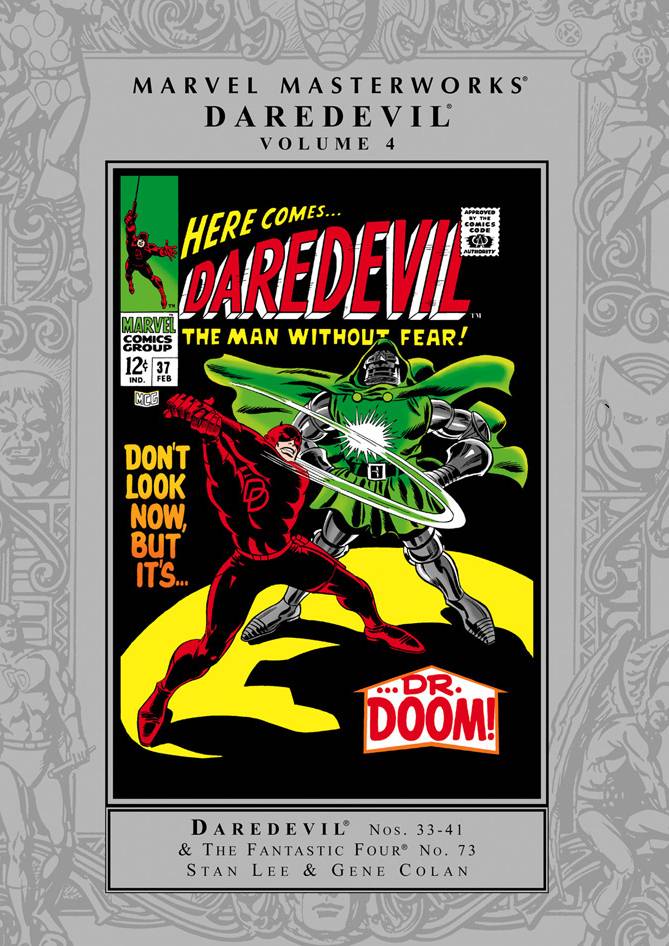 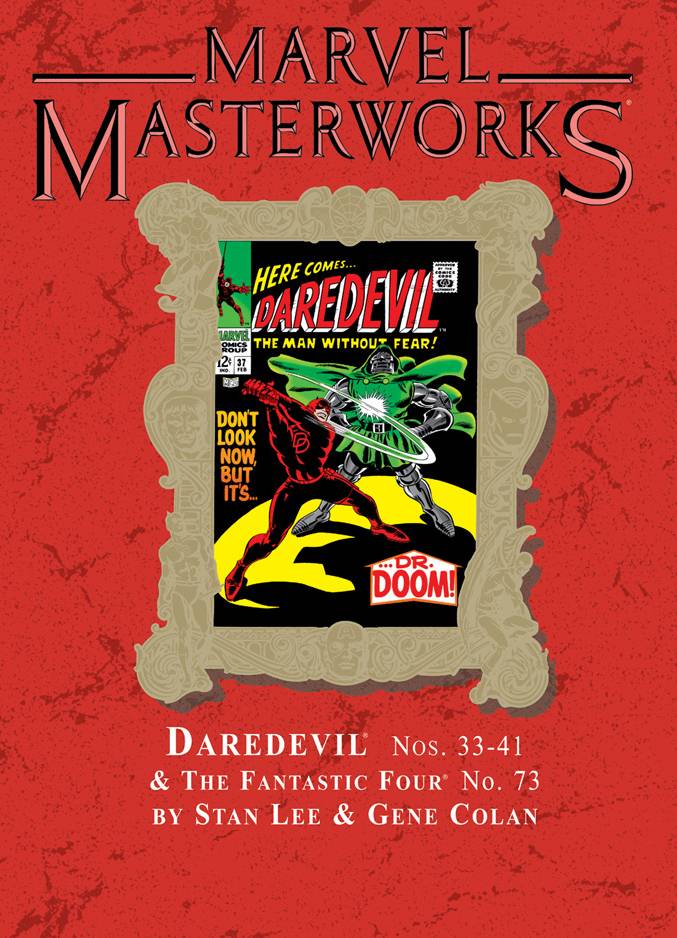 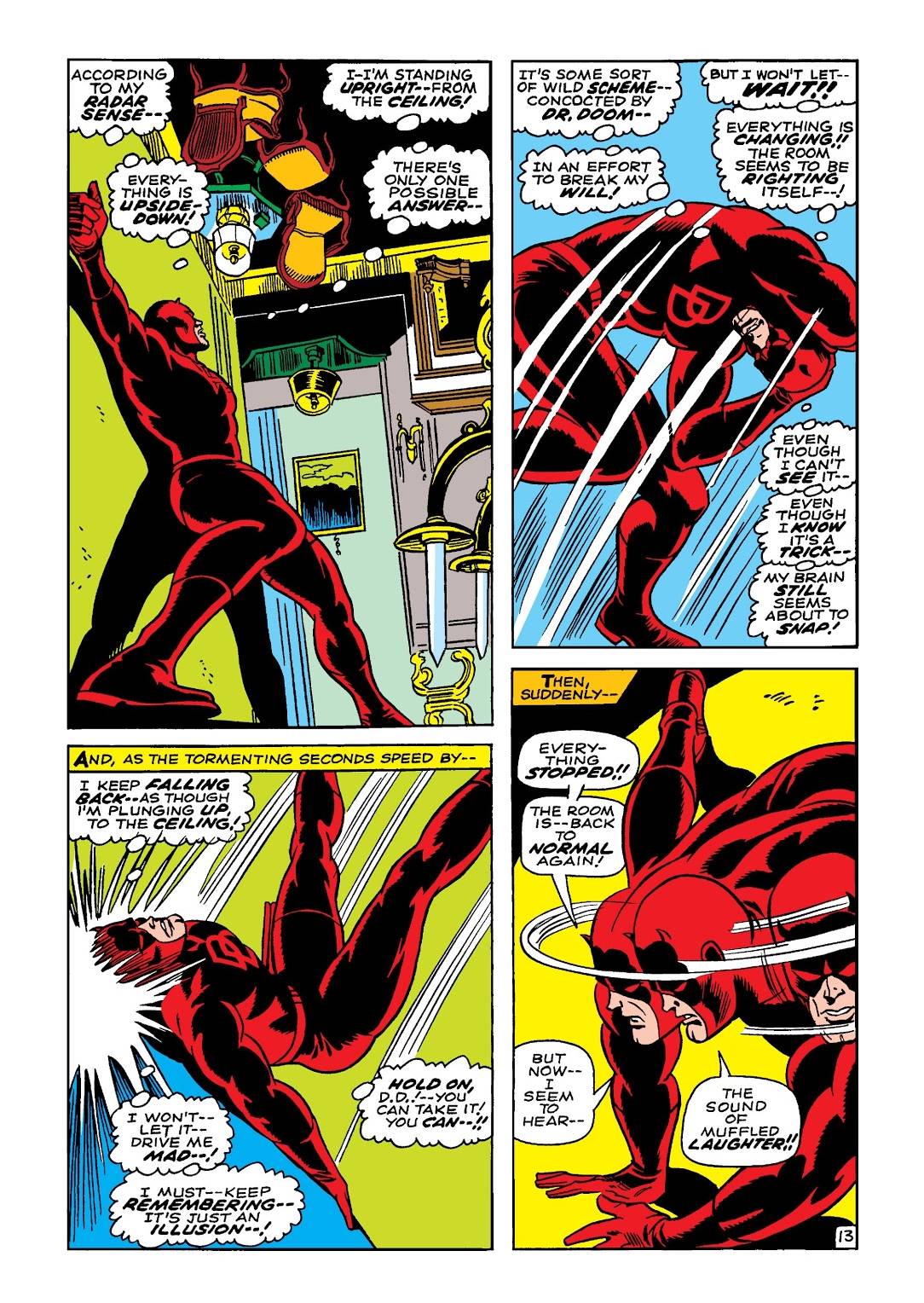 This fourth dip into Daredevil’s earliest adventures covers October 1967 to June 1968, considerately including a Fantastic Four story into which Daredevil’s plot spills. Stan Lee blends soap operatic plot-threads with a parade of guest supervillains to string together the unique fight scenes of the increasingly bold and artistically audacious Gene Colan, the artist in residence since volume three.

Following another typically frothy introduction from Lee, the action opens with ‘Behold the Beetle’. It sees the entire cast of legal partner Foggy Nelson, secretary Karen Page and Murdock in the guise of his own (fictitious) twin brother Mike – heading to Canada for World’s Fair Expo ’67. There they encounter old Spider-Man foe the Beetle in search of easy glory and untold riches, extended to a second chapter with the techno-savvy foe.

Safely back in the Big Apple, DD’s undeserved reputation as a mere costumed acrobat induces another fearsome felon to attack in ‘Daredevil Dies First!’, in which the sightless wonder is targeted by old Fantastic Four foe the Trapster, who considers the Scarlet Swashbuckler a mere stepping-stone in his overly complex plan to destroy the world’s premier super-team. Typically, Murdock manages to turn the tables in ‘The Name of the Game is Mayhem!’, a clash leaving the blind hero triumphant, but weakened and easy prey for another FF arch-foe. ‘Don’t Look Now, But It’s… Doctor Doom!’ is startling. Helpless before the Iron Dictator, Daredevil becomes trapped in ‘The Living Prison!’ as Doom swaps bodies with the sightless crusader to facilitate his own sneak attack on the Fantastic Four. It culminates in a stupendous Lee, Jack Kirby and Joe Sinnott crafted battle royale in a crossover conclusion with the Human Torch, Thing and Mr. Fantastic battling Daredevil, Thor and Spider-Man. As always when involved in mind-swap cases, it’s prudent to advise your friends when you defeat the bad guy and regain your original body.

The Man Without Fear finally found some of his own bad guys to bash when old enemies the Ani-Men return with a new name and a new boss. ‘The Exterminator and the Super-Powered Unholy Three’ reintroduces Bird-Man, Ape-Man and Cat-Man, now in the pay of a criminal genius working with time-based weapons, but the real meat of the tale is Foggy’s campaign to become New York City’s District Attorney. That potential glittering prize is threatened, however, after the portly advocate unexpectedly revives his romantic relationship with ex-convict Deborah Harris, but at least now Matt Murdock’s only rival for Karen’s affections is his imaginary twin-brother Mike.

Does Lee drag the Mike Murdock plot a little too far? When Daredevil is banished to a timeless other-realm world, Matt takes advantage of his final catastrophic battle with the Exterminator to end the clumsy secret identity charade. Perhaps at the time it worked, but now it seems strange that he doesn’t come clean, preferring to keep Daredevil’s secrets and let his friends grieve needlessly.

Rounding out the experience are number of bonus pages including an unused (presumed lost forever) cover to Daredevil 35, plus a gallery of original art pages and covers by Colan. Despite a few bumpy spots, during this period Daredevil is a dated, but enjoyable example of Marvel’s compelling formula for success of smart stories and human characters matched with magnificent illustration.

The content is presented even more luxuriously in the oversized Daredevil Omnibus, or in black and white in Essential Daredevil Vol. 2. Volume five follows, featuring a changing of the guard.