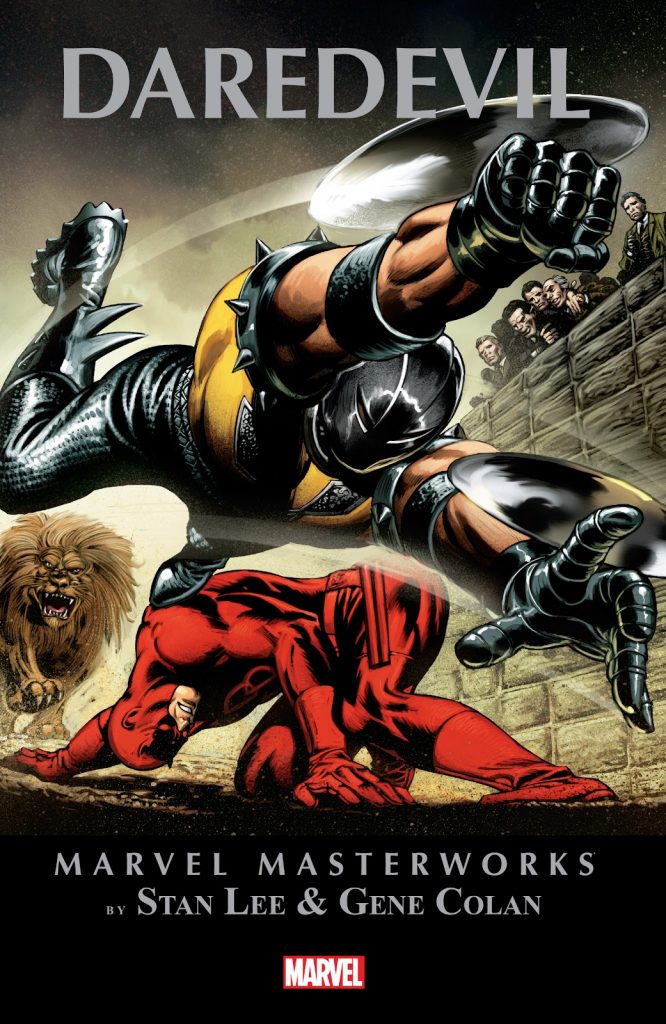 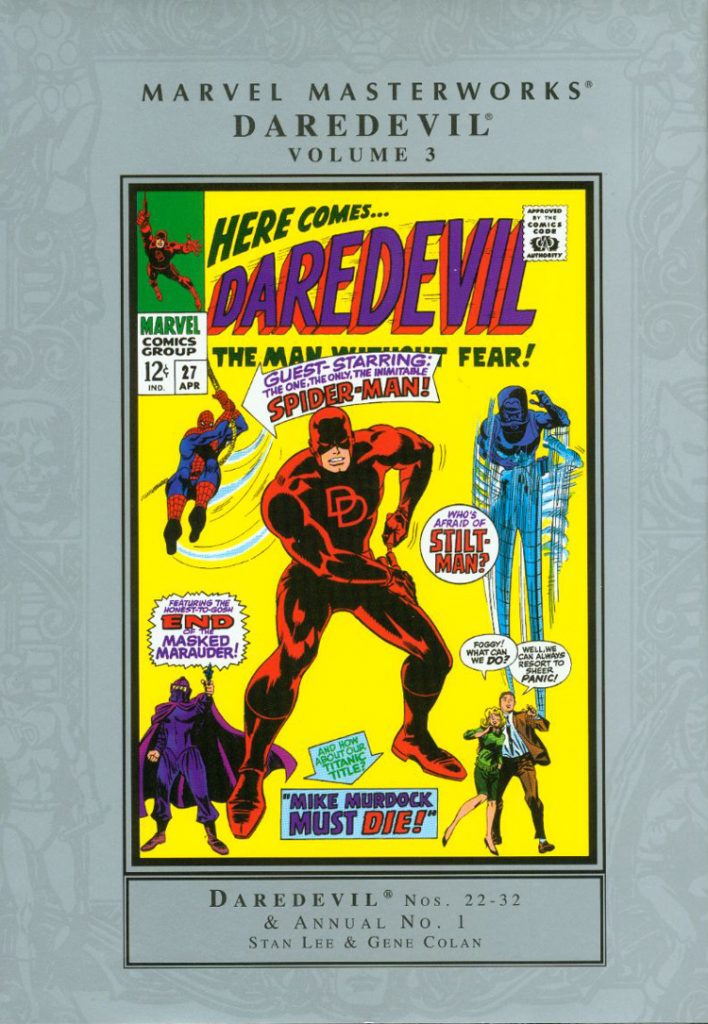 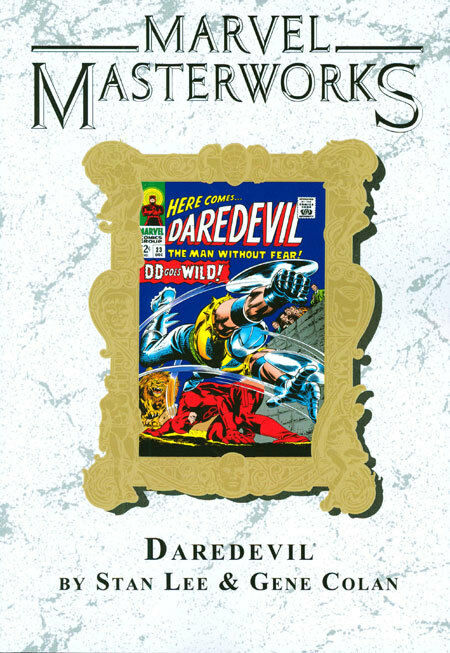 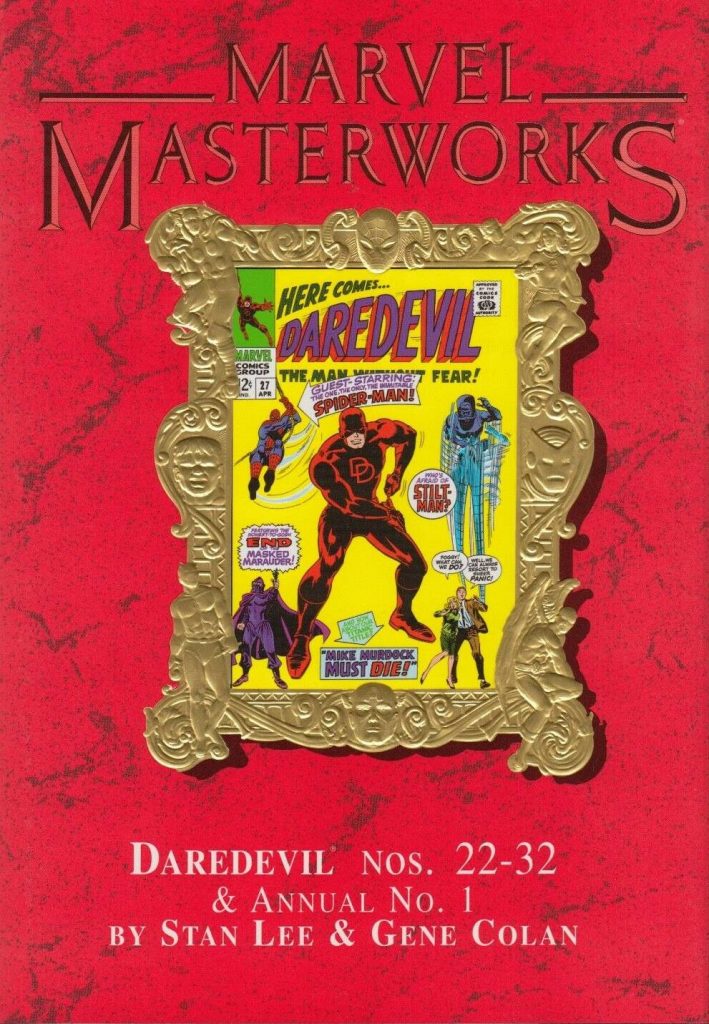 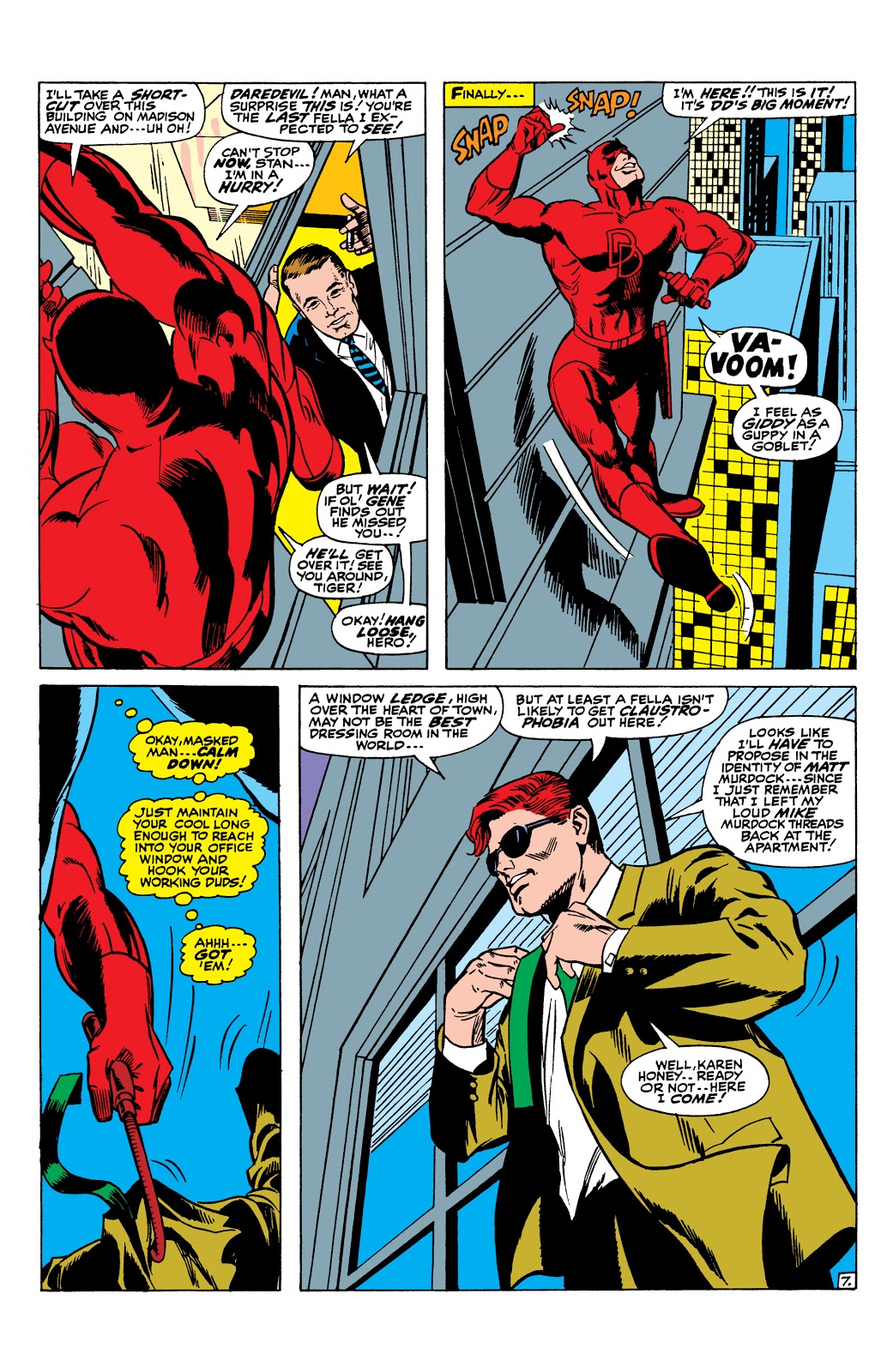 Blind lawyer Matt Murdock is also Daredevil, astonishing acrobat, formidable fighter and living lie-detector. A second-string hero for most of his early years, Daredevil only really came into his own after artist Gene Colan signed up for the long haul. Volume two featured Colan’s earliest Daredevil art, and this covers late 1966 and much of 1967.

It coincides with an improvement in overall story quality as Stan Lee utilises longer soap operatic plot-threads to string together the unique fight scenes of the increasingly bold Colan, who gradually shakes off the remnants of his predecessor’s style. He’d followed John Romita’s clipped, solid, almost chunky lines whilst drawing the Man without Fear, but increasingly drew everything else in his loose, fluid, near-tonal manner. With these tales his warring styles coalesce and the result is poetry in non-stop motion.

Following a fond reminiscence from Colan himself written in 2005, the action opens with ‘The Tri-Man Lives’, Gangland themes incorporating super-menaces Masked Marauder and Gladiator. That concludes with ‘DD Goes Wild!’ the ending leaving our hero trapped in Europe. He makes his way to England and a violent reunion with Ka-Zar, who has become the prime suspect in ‘The Mystery of the Midnight Stalker!’. This contains surely the most obnoxious misrepresentation of England in American comics when a policeman – sorry, “Bobby” – warns, “Stay back, please! The Militia will be arriving in jig time”!

After clearing the English hero’s name, Matt returns to America in time to enjoy the less than stellar debut of a certified second-rate super-villain as ‘Enter: The Leap-Frog!’ introduces a crook dressed like a frog with springs on his flippered feet (yes, really). However, the big event is meeting Matt’s hip and groovy twin brother Mike, actually Matt adopting a different personality. It’s intended to freshen the hopeless romantic triangle of Matt, best friend and law-firm partner Foggy Nelson and their secretary Karen Page, by transforming it into a wacky quadrangle. Matt’s fictitious twin brother is brash and confident, so can be ‘exposed’ as Daredevil to divert suspicion from the blind attorney who actually battled all those weird villains. Confused? The cast were.

Mike’s antics monopolise civilian scenes of subsequent stories, with Colan fully in command of his vision and a leaner, moodier hero emerging. The Stilt-Man returns, as does Masked Marauder, closing in on DD’s alter ego. ‘Thou Shalt Not Covet Thy Neighbor’s Planet!’ has the Sightless Swashbuckler ‘enjoying’ his first encounter with extraterrestrials when alien invaders’ blindness-inducing rays prove inexplicably ineffective against Daredevil. More successful is an epic clash with old Thor foes the Cobra and Mister Hyde. DD masquerades as Thor only to encounter the real McCoy. Unfortunately, the mortal hero is ambushed by the villains once the Thunderer departs and as a result of the battle that follows loses his compensating hyper-senses!

Wrapping up the devilish derring-do is the first Daredevil Annual, a visually impressive, but rather lacklustre detailing of five old foes ganging up on Daredevil. Both Lee and Electro took their inspiration from the far more memorable first Spider-Man annual. Would the Matador, Gladiator, Stilt-Man and Leapfrog be your choice of allies? A definitive smack-down results. Of more interest are the ‘Inside Daredevil’ pages, explaining his powers, his billy club, and recapping the Matt/Mike Murdock situation, plus offering stunning pin-ups of Karen, Foggy, Ka-Zar, DD and a host of old foes. A short comedy tale also features, lampooning a Daredevil story conference.

This is a mixed collection, but overall a leap in quality, also available in black and white spread across Essential Daredevil Vol. 1 and Vol. 2, or in the oversized hardcover Daredevil Omnibus, which also contains volume four.