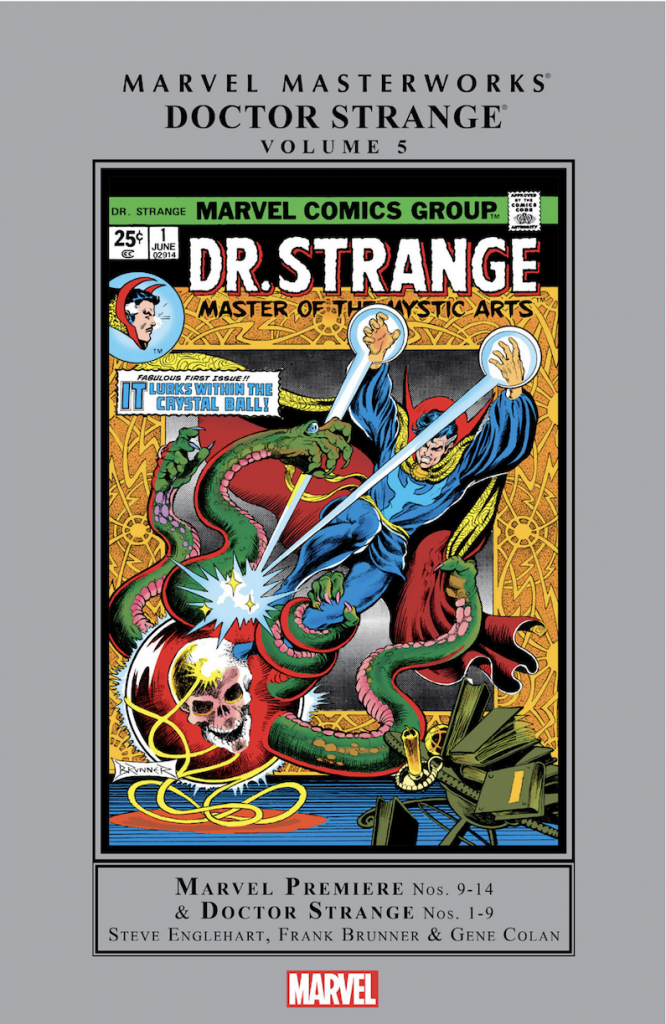 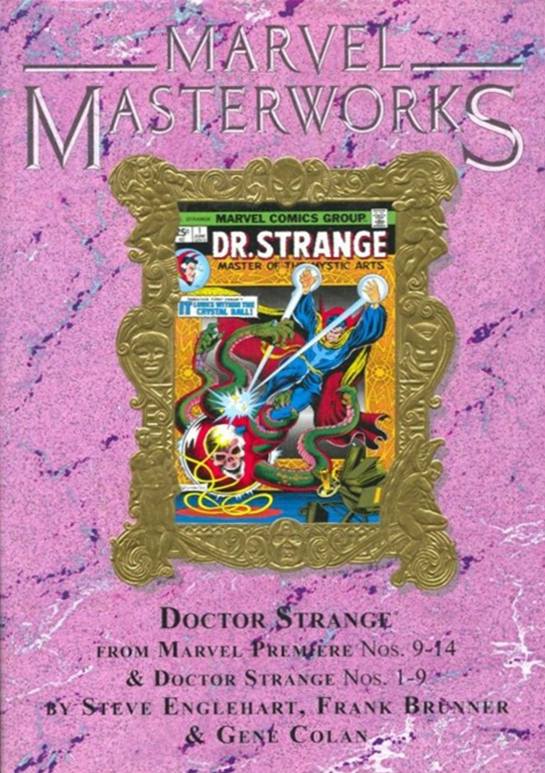 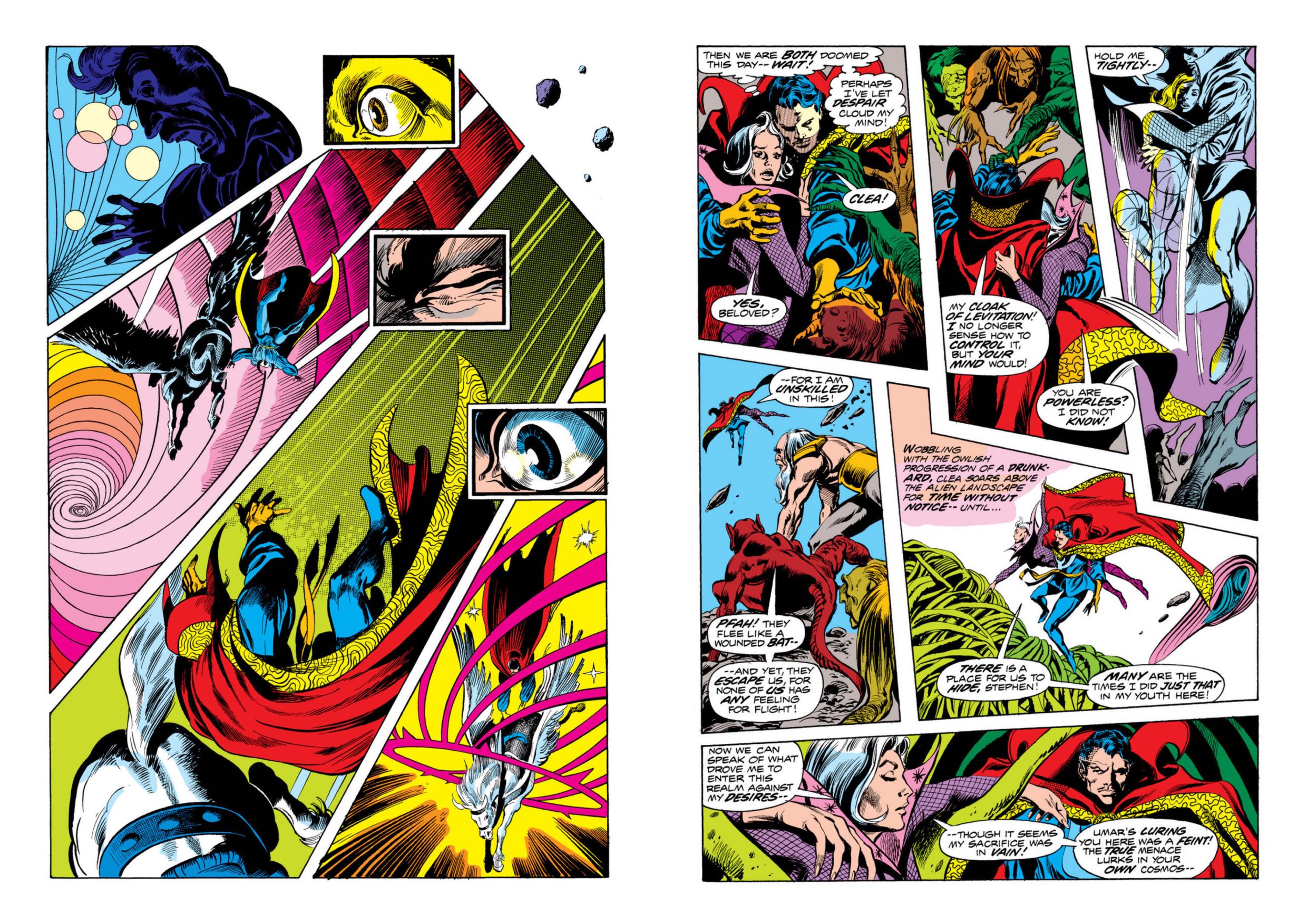 Marvel comics weren’t the consistent success Stan Lee implied. Doctor Strange was cancelled in 1969, and sustained through guest appearances in other titles. This, and a revolving door for artists and writers led to a patchy Masterworks Volume 4.

Marvel’s rapid expansion in the 1970s, gave free reign to new writers’ creative, satirical, political, and, here, philosophical visions. Doctor Strange, with, it’s mysticism, alternate worlds, and ‘far out’ artwork, chimed with the 1960s counter-culture. Writer Steve Englehart, and artist/co-plotter Frank Brunner, both 1960s teenagers, fed the counter-culture into the series, even concocting the stories together under chemical inspiration.

They begin boldly, ending the Lovecraft inspired Shuma-Gorath storyline, and in the process, Dr Strange’s mentor the Ancient One, so promoting Strange to the role of Sorcerer Supreme. The aim was perhaps to shift focus from Earth to other realms, but it immediately necessitates contrivances to diminish Strange’s apparently enhanced powers.

Other story elements fail to convince, notably how Silver Dagger can so easily enter Strange’s ‘sanctum’, steal his magical amulet, and incapacitate the supposed Sorcerer Supreme. This sends the ‘astral form’ of the injured Strange on a vague quest through alternative dimensions, to save himself and disciple/lover Clea… somehow.

The creators also struggle to develop Clea, who spends too much time as a hostage, or ‘borrowing’ Strange’s power, though she does take bold initiative at times. Other female characters, Mother Earth (later Gaea) and Umar, are both supposedly gods, but the former is effectively a damsel in distress, and the latter is fawning with her brother Dormammu, though ultimately turns the tables.

Numerous fascinating details are thrown in, like people so long-lived they are desperate to die, and Famine from the (biblical) Four Horsemen, but all with little impact on the story.

A trip through time to meet historic occultists intrigues then disappoints. The inclusion of Cagliostro is interesting, but his portrayal undermined by other characters posing as him. Similarly, in a trip to Arthurian Britain, we meet the knight Lancelot, but, strangely, not the magician Merlin. Allusions to Alice in Wonderland, appeal, including a tea party with lookalikes of Englehart’s Defenders. Even Strange admits to (what may or may not be) Silver Surfer, that his situation is “too complicated to explain”. Englehart himself hints that he was over-stretched, and only slowly getting to grips with the series. The strand that comes nearest to realising its dramatic potential is Clea’s well-conceived Dark Dimension backstory.

Signs of organisational over-stretching include changes of editor, typos, and often mismatched inkers. There’s also material that editors might otherwise have blocked for fear of offending religious lobbies, with mystic vigilante Silver Dagger revealed a rogue Catholic Cardinal, and Sise-Neg (read it backwards) going back in time, becoming ‘a god’, then destroying and recreating Earth. Englehart’s foreword notes that Stan Lee saw the latter after printing, and ordered them to issue an apology, clarifying that Sise-Neg was not God, but “a god”. Englehart’s mischievous response is too good to spoil here.

Frank Brunner’s cinematic lighting, and depictions of magical phenomena elevate the stories. He channels Ditko and Gene Colan’s visualisations, offering some suitably dizzying page designs (pictured, left). Dick Giordano’s inks add a slick finish to several chapters, and flatters Brunner’s sometimes weak/rushed draughtsmanship. Colan takes over for the final three chapters and is seen at his finest on the one inked by Tom Palmer (pictured, right).

Englehart’s early efforts are a flawed, but throughly engaging ‘bad trip’, that enables some memorable artwork. Volume 6 offers a sustained run from the Englehart/Colan/Palmer team.

This material is in the out-of-print Essential Collection 3, and Epic Collections 3 and 4. 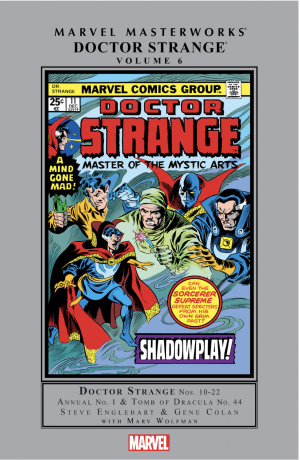 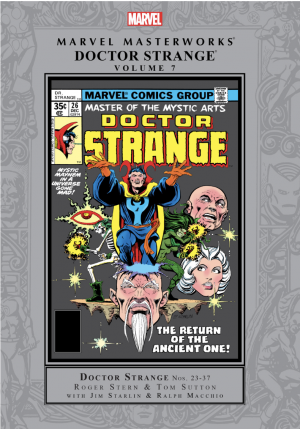 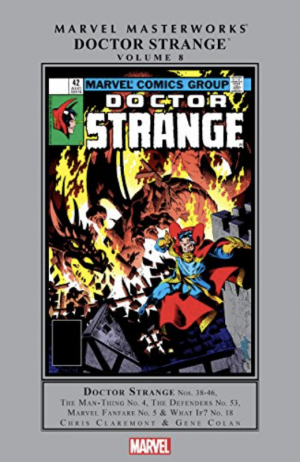 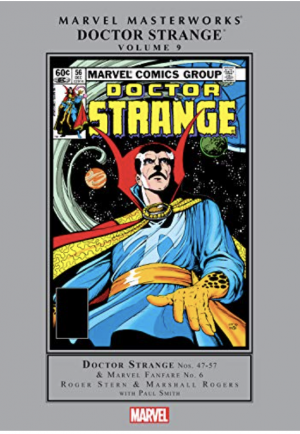