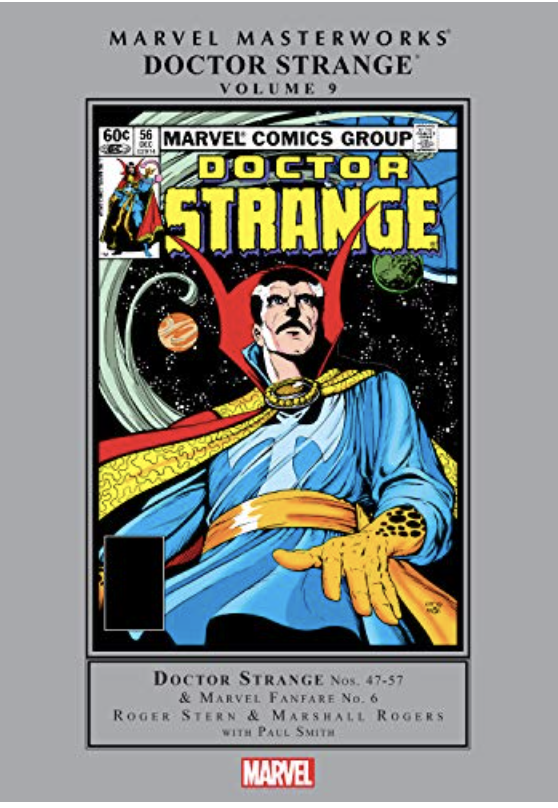 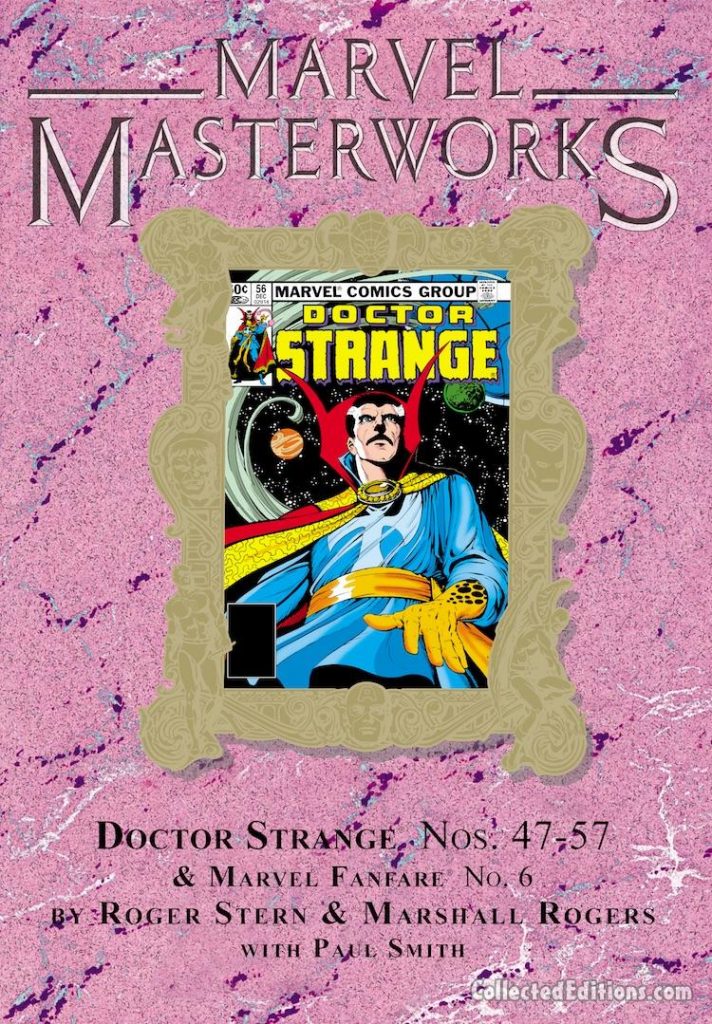 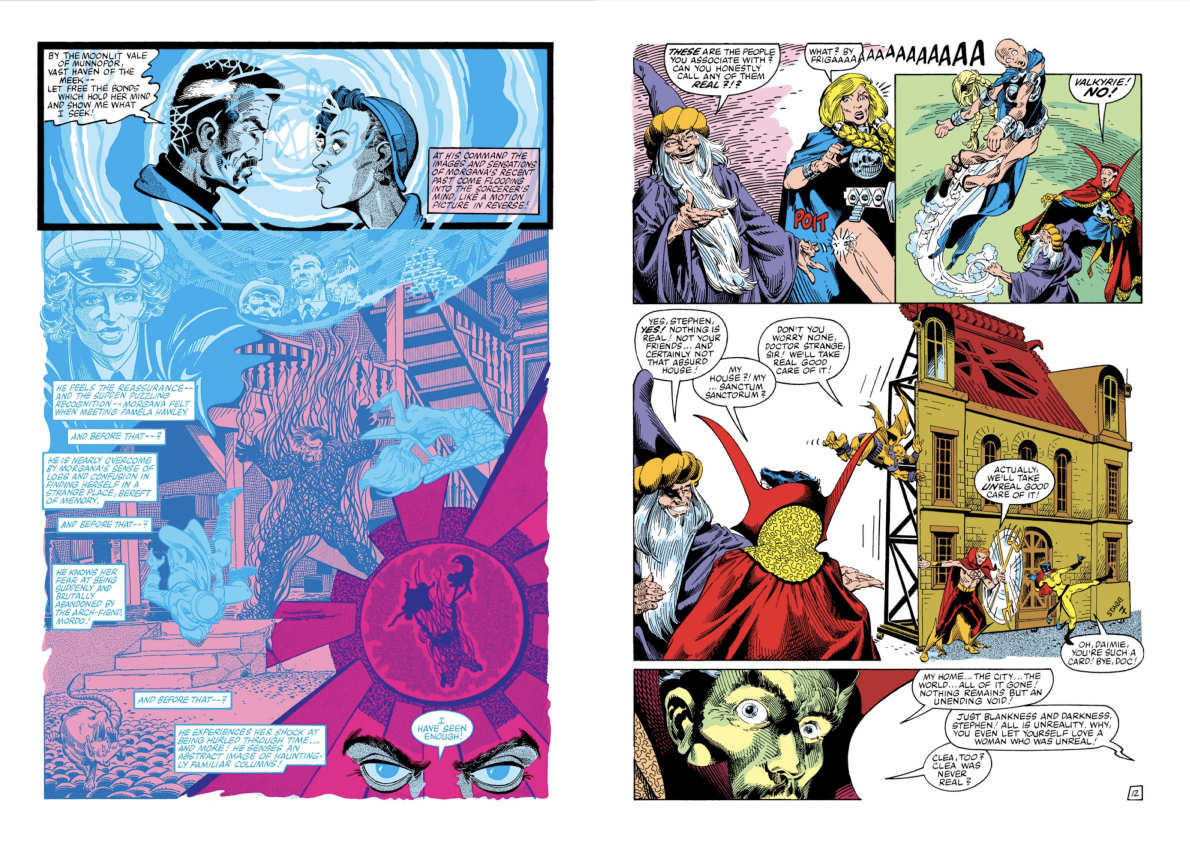 Stern, as noted in his introduction to Masterworks Volume 7, was a rookie assistant editor at Marvel, and there at the right time to fill a vacancy on Doctor Strange. He proved capable under pressure, making good use of existing Strange and Marvel characters, but with few new ideas. His introduction notes consultations with artists on what they wanted to draw, explaining the packed, eclectic stories here, and the juggling of creator availability across different series. A Brother Voodoo story was tailored for Gene Colan, who’d drawn that series, but in the end drawn by Rogers. A time-travelling story that both tied in with an early Fantastic Four adventure, and guested the Howling Commandos, was at Rogers’ suggestion. Stern, perhaps still not a source of new ideas, works well with these constraints.

The main story for the Rogers run begins with Strange identifying a possible adept called Morgana Blessing. Strange’s interest in her creates an opportunity for his old rival Baron Mordo, who uses her to breach Strange’s defences. This triggers a race back in time to find earlier incarnations of Morgana and so prevent the destruction of the world. That suggest’s Steve Englehart’s Sise-Neg (read it backwards) storyline, but Stern delivers an intricately plotted, well staged story. It could have been spread over twice as many instalments, perhaps being fitted to Rogers’ six issue commitment. The two WWII instalments riff on reputed associations between Naziism and the occult, and here involve a scheme by an old nemesis to harness hate and fear. Linking period characters to existing ones (e.g. Mordo’s grandfather) is a nice touch and highlights Stern’s meticulousness. The ‘Soul Shard’ plot and final resolution is unconvincing, but there’s so much else here to enjoy.

Stern emphasises character, and weaves developments across individual adventures, notably here, a love triangle between Morgana, Strange, and the latter’s longterm lover and disciple Clea. He uses the magical scenarios to propel the character stories, with Strange’s meetings with earlier incarnations of Morgana, creating a deep connection between those two that’s inadvertently revealed by a spell of Clea’s. A subplot concerning Clea’s Dark Dimension home involves a major turning point for her. If her decision doesn’t fully convince, it certainly makes narrative sense, and triggers two good and very different stories as Strange adjusts to the new situation.

Rogers is strong on page and panel design, and having trained as an architect, enjoys cityscapes and interiors. His figures can look weak or hasty, with Brother Voodoo notably wooden, yet he’s excellent on Strange’s balletic manoeuvres. Rogers’ routine faces also can be stiff, yet he gives Mordo a suitably manic fervour, and articulates the mix of emotions when Clea meets Morgana. His use of line art in cyan and magenta (pictured, left), adds a significant innovation to the depiction of magical effects. Terry Austin, who inked Rogers on Batman, continues to flatter him here.

The other art is good or better. Before Rogers, there’s an instalment by series favourite Gene Colan. Austin stays to ink new talents Michael Golden, Paul Smith, and Kevin Nowlan, ensuring a consistent look and standard.

The star rating is only slightly reduced by one inventory story, and an embryonic Charles Vess short.

This material should appear in the 6th Doctor Strange Epic Collection, although as that series is collected chronologically, it’s not released in order, so later volumes are already available.