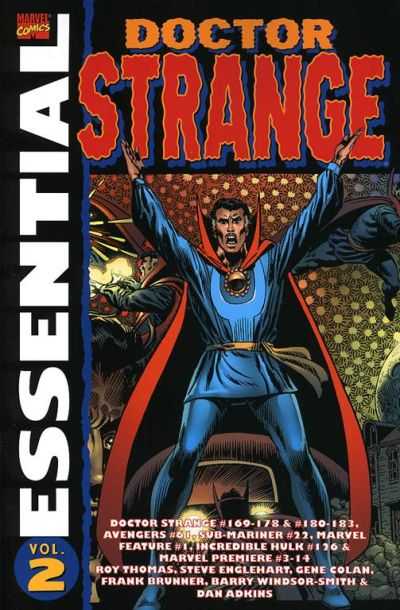 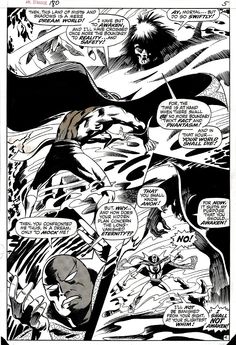 The chronological completeness of Marvel’s Essential volumes doesn’t seem such a good thing on this second black and white ‘phonebook’ collection of Doctor Strange.

Doctor Strange had started life in short takes in a mystery/horror anthology, and this volume starts as he moved to full-length stories. However, this didn’t necessarily help fledgling writer Roy Thomas. The retold origin benefits from the greater length, but other stories feel stretched. He has a difficult task of maintaining the established identity of the series, while keeping it fresh, and does this through strengthening the earthly interludes as Strange and otherworldly refugee Clea negotiate hippie-era Greenwich Village. Cab rides and alleyways inevitably lead to perils. On the downside, this also triggered his identity-protecting masked revamp. Thomas also retreads familiar ground, with the return of earlier foes Nightmare, Dormammu, and Umar, plus Eternity, and competing love interests Victoria Bentley and Clea. This romantic triangle is one of many times where Thomas fails to develop the inherent drama and conflict.

The earliest stories here see Dan Adkins and Tom Palmer taking respectable turns mimicking the gothic interiors, and psychedelic vistas of Strange’s creator Steve Ditko. By the third story, penciller Gene Colan arrives, so beginning the series’ second great run. Colan was already a veteran, latterly drawing Marvel’s (then) second division superheroes Iron Man and Daredevil. Yet, Doctor Strange saw him breaking new ground for himself and for the medium. He starts well, and over his first three stories develops his signature style for the character. Ditko created a virtual window into surreal, imaginary worlds, but Colan throws the reader through that window. His art was always highly kinetic, sending the eye darting around the page, and here he adds some of the most daring page layouts seen in the medium. It’s a brilliantly dizzying reading experience. By the end of his nine story run (pictured), he’s thrown away his set-square: the only right angles in sight are the edge of the pages. Tom Palmer’s inks add film noir lighting and an almost photographic realism to the characters and real-life elements. In pre-CGI 1968 there was little to compare with this, and it surely deserved to be called ‘far out’. It may have been too much for some readers though, as the comic was cancelled.

By that point Thomas had refocused the series on Lovecraftian ‘ancient evils’ threatening earth, and he continues this across issues of Hulk and Sub-Mariner, into the creation of the Defenders. All are included here, along with an earlier crossover featuring Black Knight in The Avengers.

The relaunch of solo Doctor Strange suggested investment in the character, with hot artist of the day Barry Smith creating a Nightmare story, with Stan Lee returning to script it. Smith clearly enjoys the magical elements, but is weaker on the everyday scenes of his second outing. Under Thomas’ editorship a succession of writers and artists pursue the Lovecraftian story of off-stage evil Shuma Gorath. The latter is from Robert E. Howard’s Kull stories, which may interest some. If you’re not a Howard completist or interested in formative one-offs by P. Craig Russell, Frank Brunner, and Jim Starlin, these become an increasing chore to get through.

This is well worth the original cover-price for the Colan stories alone. The complete contents are also available in colour in Marvel Masterworks Doctor Strange volumes 3 and 4. All are currently out of print with new and used copies selling for eye-watering prices, but look out for new editions in the wake of the film.