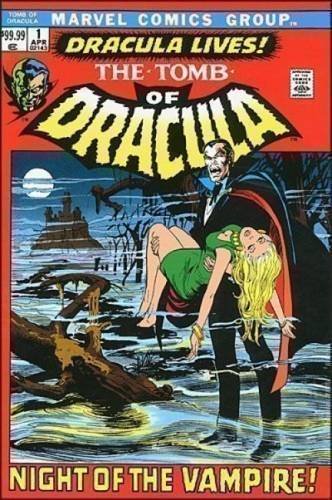 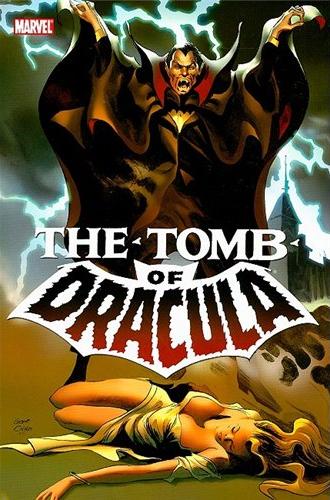 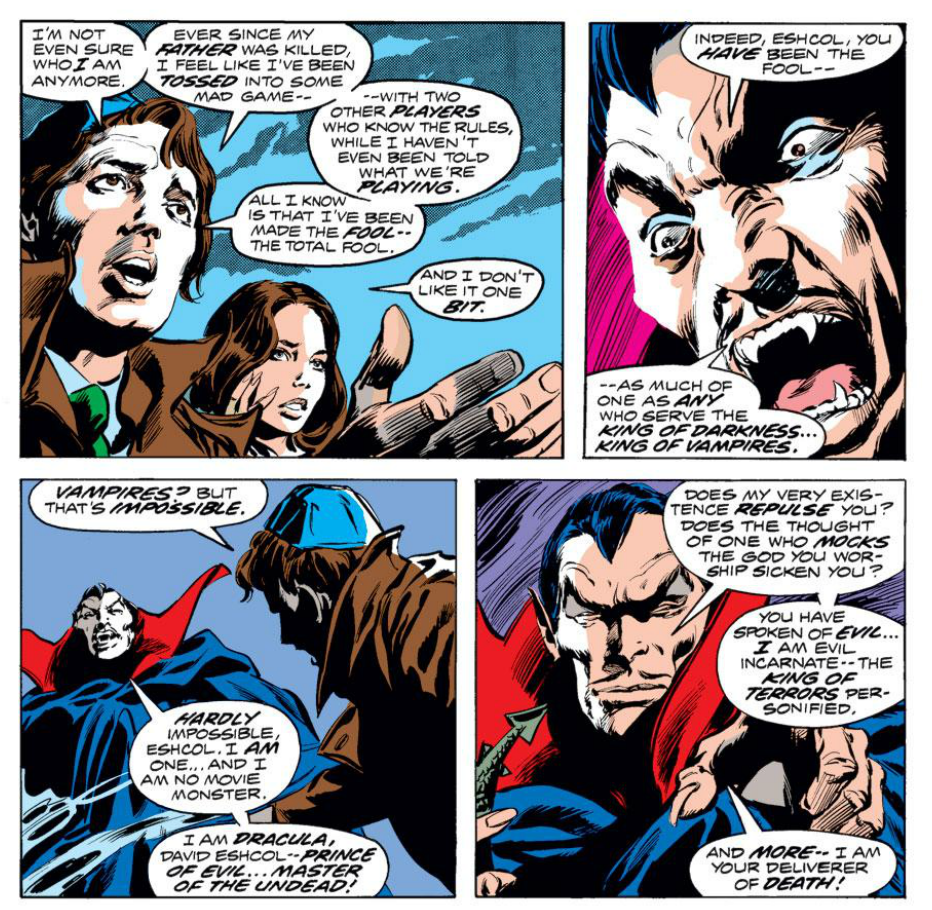 Tomb of Dracula is Marvel’s horror classic from the 1970s, and this Omnibus collects the first 31 issues, plus crossovers with other titles. So, the same contents as the paperback Tomb of Dracula volumes one to three, and for greater detail see those individual reviews. The content is also available spread over the first two volumes of the budget black and white Essential series.

This is twenty years before TV’s Buffy the Vampire Slayer, but pre-empted some of the key elements. It’s an ensemble piece about a team of vampire hunters. There’s a wise older man as the expert and leader (Quincy Harker), and a blonde female (Rachel van Helsing) as the action hero. There’s ‘good’ vampires hunting their own kind, and complex attractions and relationships between vampire and human characters. There’s also an African-American hunting the vampire who killed his mother in Blade – mirrored in Buffy with Principal Wood.

The series initially suffered from changing writers and no clear sense of direction until Marv Wolfman took over, although he himself claims it took until issue twelve before he found his feet. From there he sustained the quality throughout the series, collected in this and a second Omnibus. These are literate, character-driven stories. Dracula and his schemes are the driving force, but the stories focus more on the effects on the other characters.

As the issues progress, further characters are introduced. Hannibal King investigates others while keeping his own dark secret. David Eschol is caught in his father’s ambitions gone awry. Sheila Whittier, who Dracula rescues and appears to care for. The vampire hunters part to pursue personal matters, which slowly build towards conclusion in the next volume. Some material is presented as the Count’s journals, which provides back-story, and highlight a very subjective view of his experiences, particularly the rights and wrongs.

The excellent Gene Colan pencilled every issue, with Tom Palmer becoming regular inker. They were one of Marvel’s best art teams of the time, and perfectly suited to the mood of Dracula. Palmer renders Colan’s dynamic pages in fluid lines and heavy blacks, and in most issues he also supplied the colour, with a palette subtle in its day that still looks great. Ironically though, the better printing and paper in these deluxe reprints renders the colours a bit too bright, which might not matter on a Jack Kirby book, but it matters here. The colour’s softer in the paperbacks.

Marvel’s laudable approach to these reprints is to include all crossovers and stories from companion titles. The problem is that those stories are mostly by different creators, and not as good, particularly the hundred-odd pages of art by Don Heck. These stories also don’t generally link to the main narrative, so they could have been omitted or collected in a separate volume. Many readers will just skip these, but they add up to around $20 worth of this book. The exception is the crossover with Werewolf by Night drawn by Mike Ploog

$99 seems a steep cover price, but compared to the cost of buying individual issues (if they were in print, and not rare collectibles) it’s good value, and not much dearer than buying the three paperbacks. There’s also the bonus of over-sized pages better delivering the art.

Tomb of Dracula is a highlight of Marvel’s 1970s output. Art and story are still very strong, but these collections are slightly let down by the bright printing, and more so by the quantity of weaker material from the companion titles.