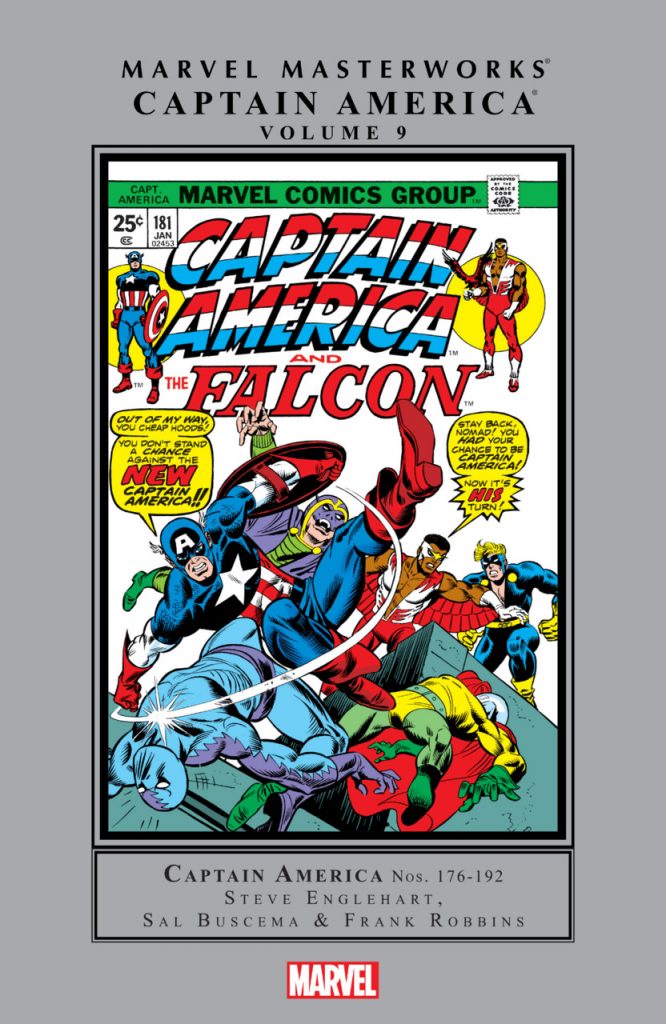 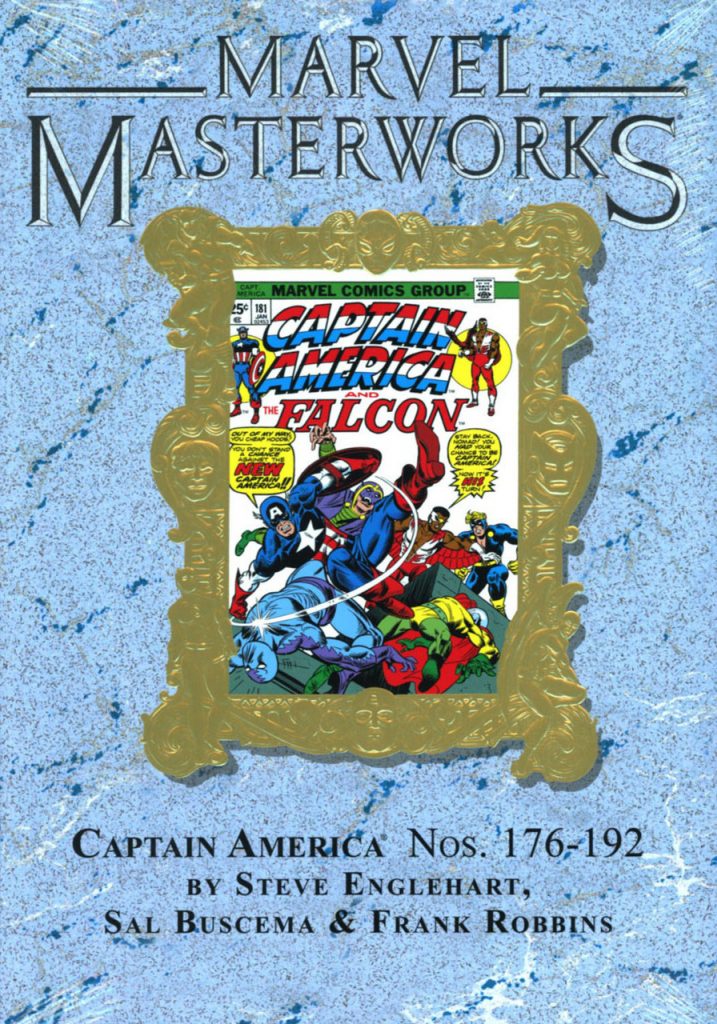 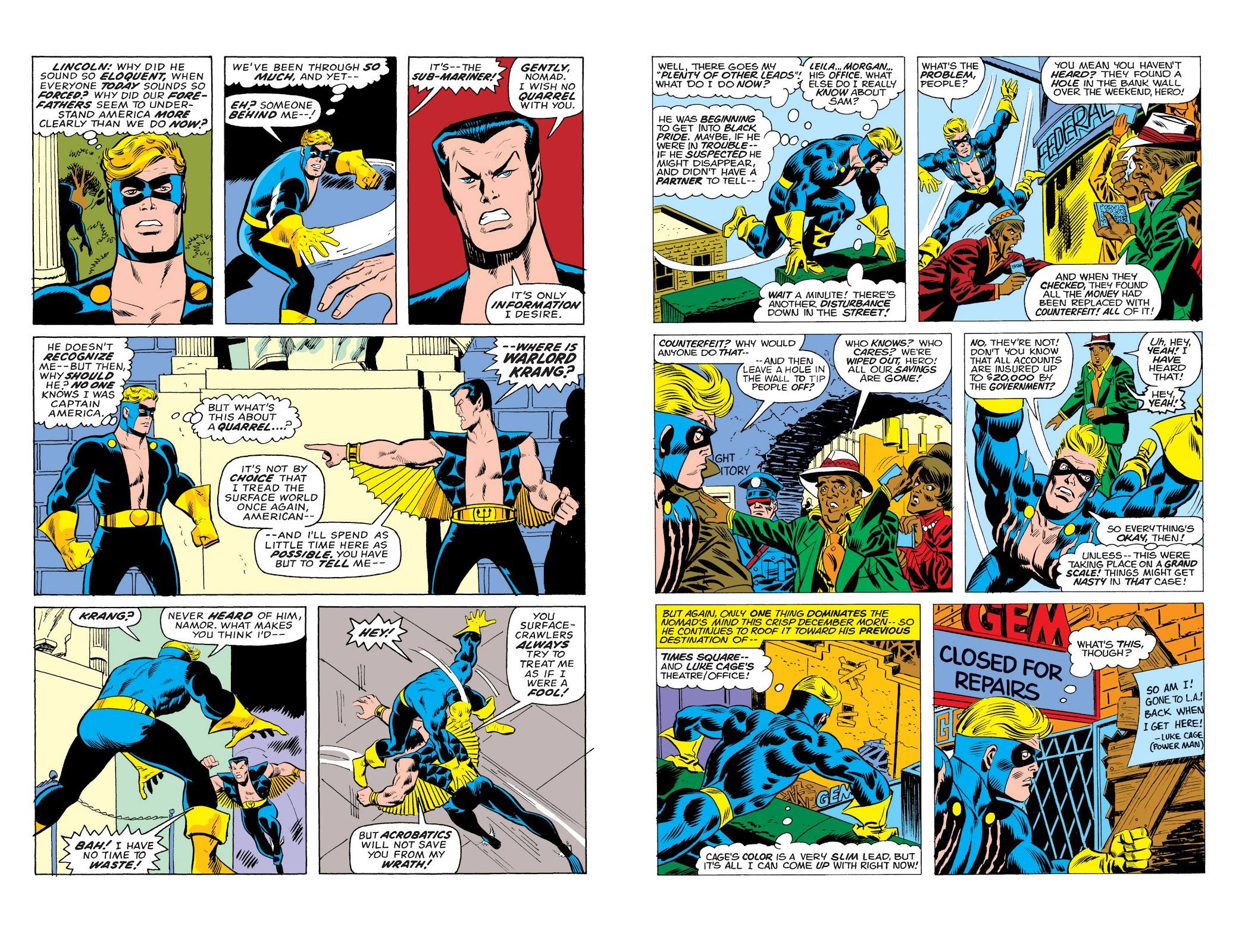 As this Masterworks volume opens in the 1970s, the once convinced and confirmed Sentinel of Liberty has become a lost symbol of a divided nation, uncomfortable in his red, white and blue skin and looking to carve himself a new place in the Land of the Free.

Masterworks 8 concluded with an attempt by sections of the elected government to seize control of the USA by deceit and criminal conspiracy. At the time it was daring content from Steve Englehart, and while Captain America foiled and exposed the plot, he could no longer be associated with a tarnished ideal. To begin with staunch ally Sam Wilson/the Falcon carries on alone, but as Steve Rogers settles into an uncomfortable retirement, a number of painfully unqualified civilians begin trying to fill the crimson boots of Captain America. This has dire results.

Englehart provides a novel solution via unsettled civilian Rogers hunted by a mysterious Golden Archer. It leads to him adopting the separate costumed identity of Nomad. Typically, the sinister Serpent Squad turn up again with psychotic Princess Python in tow and maniac nihilist Madame Hydra murderously assuming the suddenly vacant role of the Viper. When “the Man Without a Country” tackles the ophidian villains, he fares badly but stumbles across a sinister scheme by the Squad and Sub-Mariner‘s arch-nemesis Warlord. The subsea tyrant – in the grip of ancient evil forces – seeks to raise a sunken continent and restore an ancient civilisation. At the same time Falcon is ignoring his better judgement and training a determined young man to become the next Captain America.

A glittering era ended when Sal Buscema surrendered Captain America, and newspaper-strip creator Frank Robbins came aboard for a controversial artistic run, his kinetic style not universally well received. He joins as Englehart cranks up the horror, fooling readers into believing Nomad successfully mopping up the Serpent Squad is the issue, when it’s really Sam and Cap’s substitute encountering the Sentinel of Liberty’s greatest enemy.

The saga shifts into high gear as shamed, grief-stricken Steve Rogers once more takes up his stars and stripes burden for a twisting tale of shock revelations. Englehart’s introduction reveals he had no idea where he’d take the plot he introduced, and in the event it was left to John Warner, then Tony Isabella and Bill Mantlo to wrap it up. The feeling is that Englehart is being polite in talking up the resulting melodrama.

Closing this selection is an ingenious, entertaining filler written by Marv Wolfman, illustrated by Robbins, wherein Cap hops on a commercial flight back to the East Coast and finds himself battling deranged psychiatrist Dr. Faustus and a contingent of mobsters thousands of feet above New York.

With all plots safely settled, the stage was set for the return of Captain America’s co-creator Jack Kirby in Masterworks 10 with a bombastic fresh take that would take the Sentinel of Liberty into regions never before explored, but that’s the concern of another review.

There are cringeworthy story moments such as Cap battling three chicken-themed villains for example, and uncomfortable dialogue from this forthright and earnest era of “blaxsploitation” and ethnic awareness. They tail off, but the cultural significance was in informing the political consciences of the youngest members of post-Watergate generation. These stories can also be found in black and white, split between Essential Captain America Vol. 4 and Vol. 5.