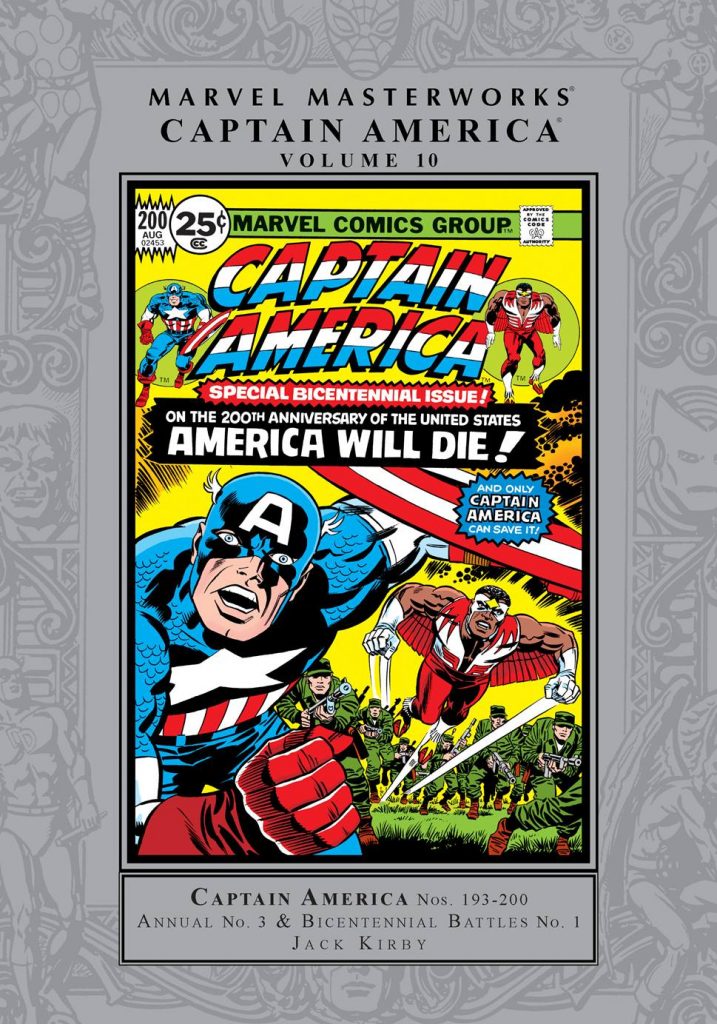 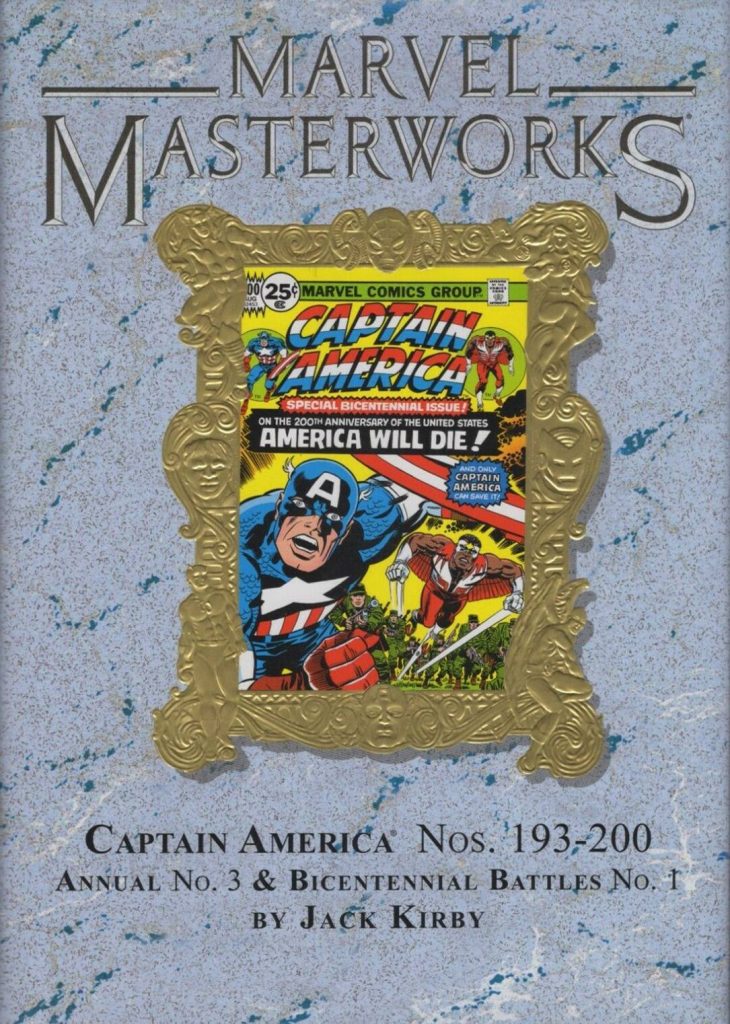 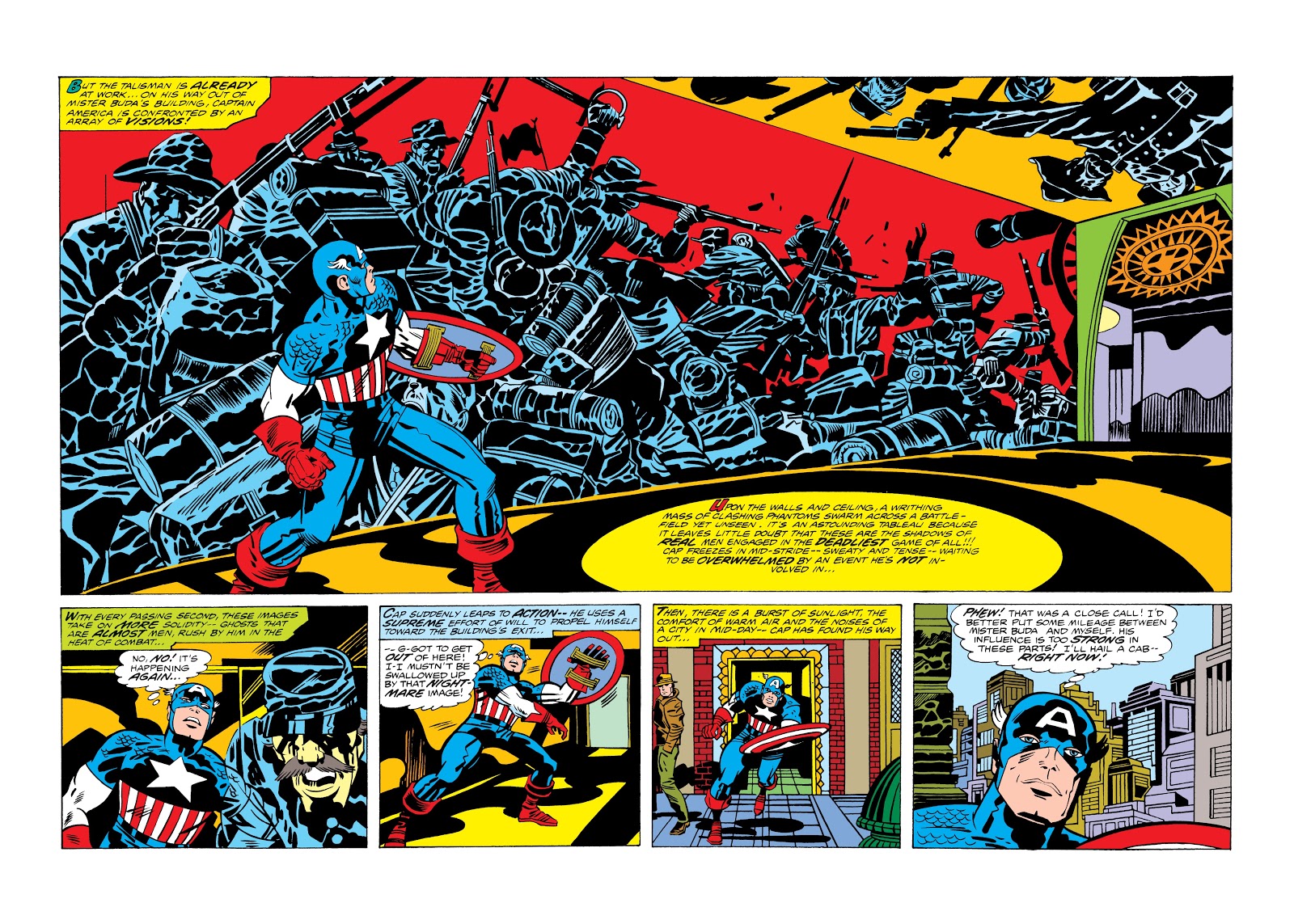 This first of two Masterworks volumes reprinting Jack Kirby’s 1970s steering of Captain America provides three different stories. ‘Madbomb’ is a mad action rush, ‘Bicentennial Battles’ drops Captain America back into the past, and ‘The Thing From the Black Hole Star’ is sci-fi/horror pastiche. Although at this stage the Falcon shares title billing, much of his presence here is perfunctory, and he’s absent from the two shorter stories.

The US bicentennial was very much on Kirby’s mind for 1976 as he tailored ‘Madbomb’ toward the summer celebrations, and created a special in which Captain America participates in pivotal moments of American history along with meeting the people who shaped the nation. Neither is ultimately successful, yet for opposing reasons. The eight chapters of ‘Madbomb’ sag in places and never convince about the difficulty of dealing with the threat, while ‘Bicentennial Battles’ frustrates because Kirby tries to pack in so many important people and moments. There’s barely any time to focus on any of them. The spiritual purpose of Mr Buda, whose tricks deposit Cap in the past is also muddy.

What’s not in question is the quality of Kirby’s memorably excessive art. ‘Madbomb’ opens with a tester device sending New Yorkers crazy, and Kirby supplies utter carnage on the streets as it turns those within its vicinity into raging maniacs. In ‘Bicentennial Battles’ the Civil War action, or a nostalgic Captain America and Bucky vs Hitler battle are an artistic joy, that sequence lovingly inked by Barry Windsor-Smith, and Cap in a Busby Berkely style musical is must-see. The sample spread is an amazing piece of work. Without the surrounding material you’d have a hard time identifying the creator of the background frieze as Kirby, yet his art is usually so distinctive. It more resembles Frank Miller’s work from a decade later when he’d studied a lot of Japanese comics. We’ve used the digital version for best presentation, but the pages obviously have to contend with the binding in the book.

Adding another mood, in the midst of ‘Madbomb’ there’s a touching interlude in which Steve Rogers has a confessional conversation with a woman being held hostage to ensure her scientist father’s co-operation. Completely removed from the manic tone of the remainder, it’s poignant and still resonates.

The final offering is bonkers and brilliant. Kirby just drops us into the middle of Captain America and a farmer battling an alien creature, fighting for their lives. A spaceship has landed on the farm, and we cut between that and other aliens heading toward Earth, frustrated at not being able to recapture the already landed refugee. Kirby fools readers well, and from outer space to dozens of robots unleashed on the farm it’s another energetic artistic treat.

Kirby’s remaining, and better 1970s Captain America stories are presented in Volume 11. As an alternative to this pricy hardback, these stories are also available spread over two standard paperbacks, Madbomb and Bicentennial Battles, with latter reissued on its own in the treasury format as in the 1970s. They’re all also available in black and white on pulp paper as Essential Captain America Vol. 5.