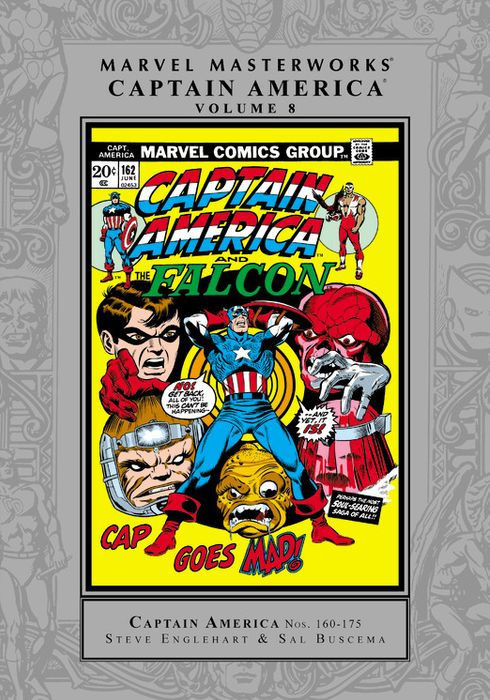 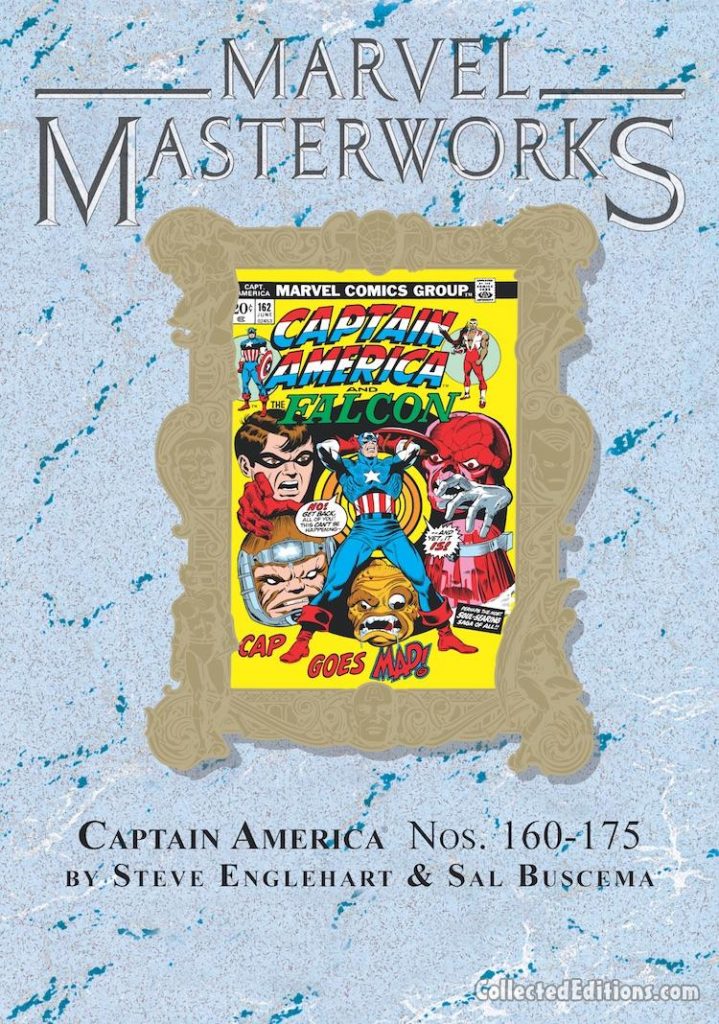 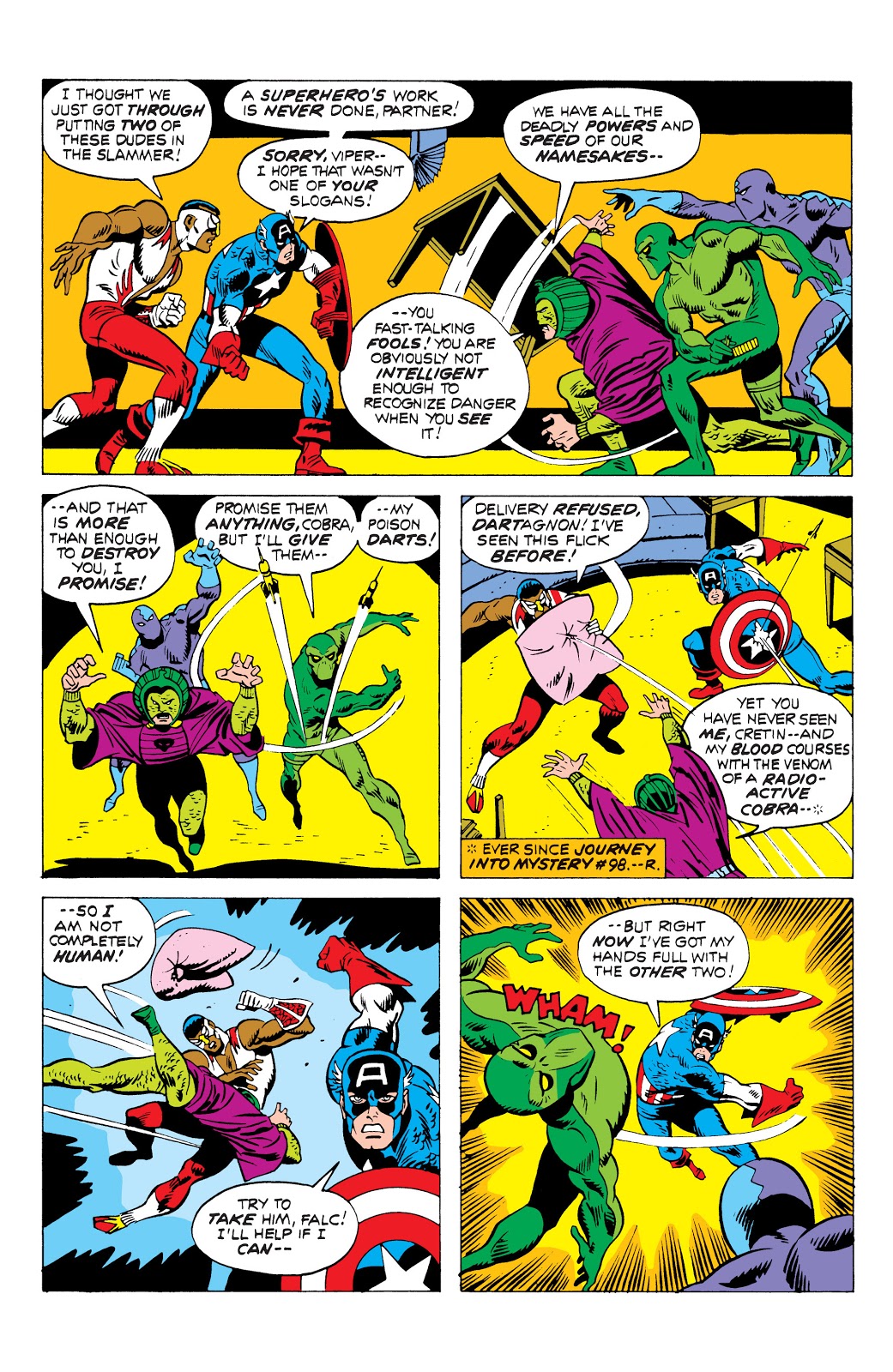 Captain America’s eighth Masterworks volume covers just over a year of continuity from 1973 to 1974, a period of almost unknown cultural and political turmoil in the USA, which Steve Englehart reflected in his stories about the man costumed in the American flag.

The opening bout offers an old-fashioned clash with a super-powered maniac, but starts twin subplots intended to shape the next half-dozen adventures. The Star-Spangled Avenger’s newfound super-strength increasingly makes partner-in-crimefighting Sam – the Falcon – Wilson feel like a junior and inferior hindrance, while Steve Rogers’ long-time romantic interest Sharon Carter leaves him without a word of explanation.

Tension between Steve and Sam is ramped up as the heroes search for Sharon and find a connection to the girl Cap loved and lost in World War II. Englehart then returns super snakes Viper and Eel, who combine with the Cobra to form a vicious but ultimately unsuccessful first iteration of the Serpent Squad. Defeated former ad-exec Viper then vengefully begins a media manipulation campaign to destroy the Sentinel of Liberty using fake news weapons and the worst tactics of Madison Avenue. Although the instigator quickly falls, his scheme rumbles on with slow, inexorable and dire consequences.

A scary interlude episode illustrated by Alan Weiss introduces faux-coquette mad scientist Deadly Nightshade. The full horror is only revealed when ‘The Yellow Claw Strikes’, renewing a campaign of terror begun in the 1950s, but this time attacking his former Chinese Communist sponsors and the USA indiscriminately. Look for giant bugs, deadly slave assassins and reanimated mummies.

Masterworks 7 deftly explained some loose continuity, and main plots are temporarily put on hold for Roy Thomas and Tony Isabella to tinker with another thread, and in the process introduce someone who’d become a major Marvel player in the 1990s. Here, though, pre-Jean Grey, they’re just the Phoenix.

As anti-Captain America TV spots make people doubt his honesty and sanity, the Falcon and his “Black Power” activist girlfriend Leila Taylor depart for the super-scientific African nation of Wakanda in search of increased powers, leaving Cap to battle third-rate villain the Tumbler. It begins a tense seven episodes introducing Moonstone, guest-starring the then missing in action X-Men, and the threat of the Secret Empire. Where Englehart takes the plot still surprises, as does the location of the finale, boldly chiming with contemporary American uncertainty.

In 1974 the USA reeled from a loss of unity, solidarity and perspective as a result of shattering blows such as losing the Vietnam war and the (partial) exposure of President Nixon’s lies and crimes. The general loss of idealism and painful public revelations that politicians are generally unpleasant – and even possibly ruthless, wicked exploiters – kicked the props out of most Americans who had an incomprehensibly rosy view of their leaders. Englehart’s use of that was extremely controversial yet oddly attractive in those distant, simpler days. The core story can also be found in paperback as Secret Empire.

Any retrospective or historical re-reading will turn up a few embarrassments. The Yellow Claw is an uncomfortable reminder of clumsy racial generalisations, and Nightshade’s costume is the ridiculously skimpiest of beachwear. However these tales of matchless courage and indomitable heroism are fast-paced, action-packed and still carry a knockout conceptual punch. Englehart’s run continues in Masterworks 9, or alternatively all that content is available with this in Essential Captain America Vol. 4, but in black and white. 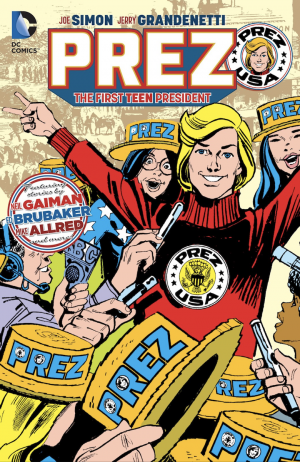 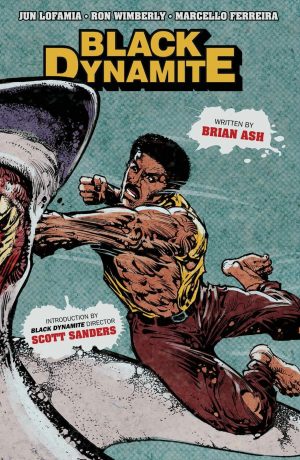