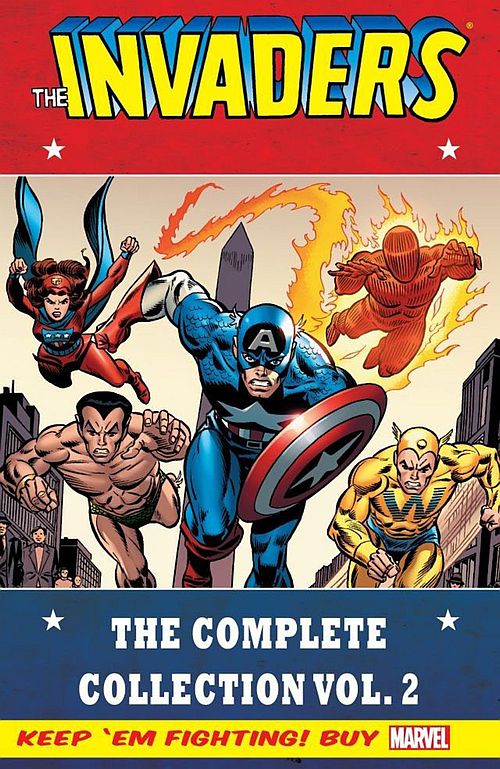 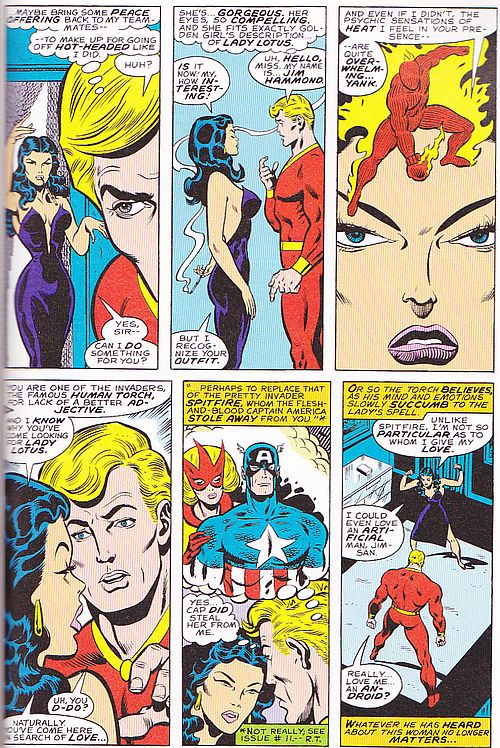 The second collection of the Invaders series set during World War II opens with the consequences of the first one’s last issue, when the Human Torch’s young sidekick Toro was gravely wounded. A quest for the right doctor follows, which leads to stories with an unexpected real-world bent.

Writer Roy Thomas wanted to produce a series following real history, which limited the importance of the heroes’ work, as they couldn’t defeat Hitler or anything similar. That didn’t prevent Thomas from introducing some progressive narratives and adding depth to his superhero/war blend by focusing on evils less obvious than Nazis, such as colonialism. This is in an Egypt-bound tale where a magically-empowered character seeks to free his country from the British yoke, to the price of allying himself with their enemies. We also see the treatment of Japanese-Americans who were sent to internment camps during World War II . That Thomas displayed this in a late 1970s Marvel comic shows some real backbone.

Toro’s injuries also lead to the creation of new and more diverse characters, with a young Japanese-American woman becoming Golden Girl and a young black man becoming the Human Top, both members of the aptly-named Kid Commandos. Setting up a team of young heroes was in keeping with a more modern take on the sidekicks, who during the 1940s had been created only as identification points for young readers; in the 1970s, those characters were shown as wanting to have a life of their own.

Another notable tale saw Nazi super-science summon a Norse god and convince him to fight the enemies of the Germans. Since that god was Thor from ancient times, far before he became an Avenger, this crossover is very different from the usual Marvel shenanigans.

It is unfortunate that original series artist Frank Robbins worked only on the first six chapters of this collection, since his fluid and dynamic style had been an important part of the Invaders’ unique look and feel. Alan Kupperberg, his main replacement, had a more staid approach, in line with the Marvel house style and less surprising. Frank Springer stayed a while longer on the inks, bringing some continuity to the art, and Thomas’ works is finished before the end, replaced by Don Glut. The general feel of the narrative didn’t change much, probably because Thomas remained as editor.

The Invaders ended in 1979, bringing together various characters created for the series, including the late creation Lady Lotus, a telepath Asian woman who owed much to Femmes Fatales from Terry and the Pirates or the Fu-Manchu pulps.

This collection contains a few more tales, all by Thomas. A 1993 return to the Invaders is drawn by Dave Hoover in typical 1990s style, full of gritted teeth and speed lines. Thomas reintroduced a few more 1940s characters, as well as some new ones in a very pulp plot where a Nazi scientist wants to cause quakes on the western seaboard of the USA and fill the air with poison gas.

Of note is a beautifully illustrated short story drawn in 2006 by Lee Weeks, where the Invaders foil an assassination attempt on both Churchill and Roosevelt. The book ends with one last tale by Thomas and Robbins, which reveals what really happened to Hitler… and which Invader killed him.

The Invaders remains a special series, even forty years after its publication, and deserved the representation via these two good collections. Readers beware: these comics (minus the Lee Weeks story) are also reprinted in four volumes, simply titled Invaders Classic and published between 2007 and 2010.