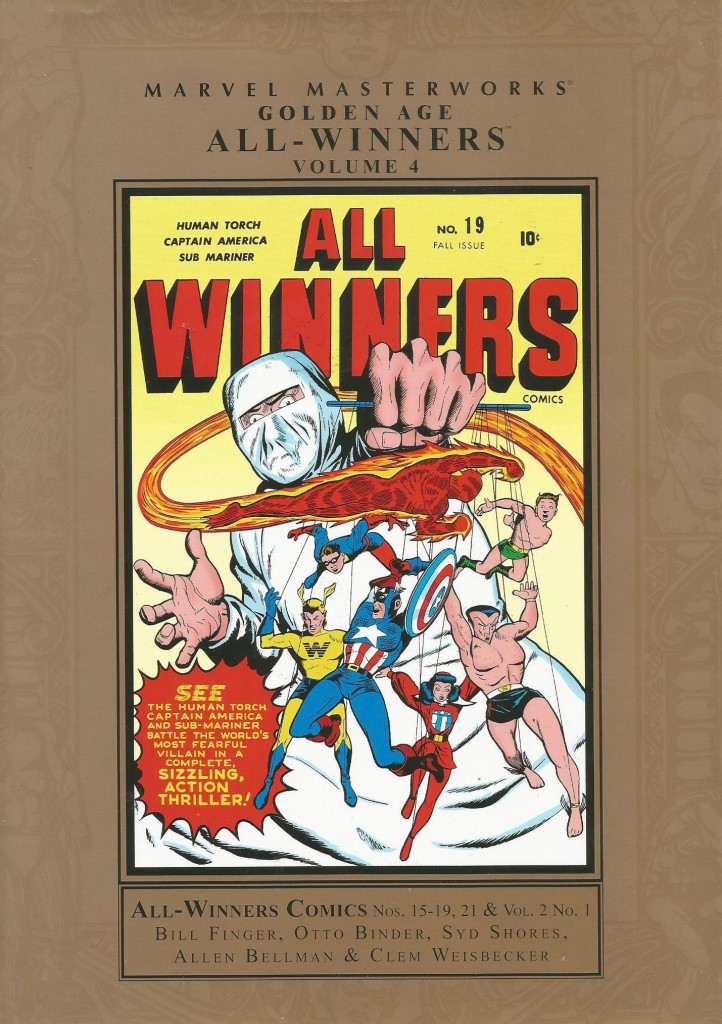 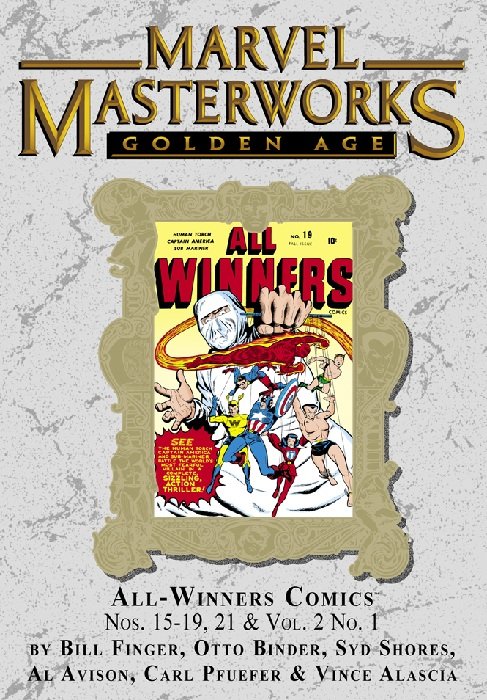 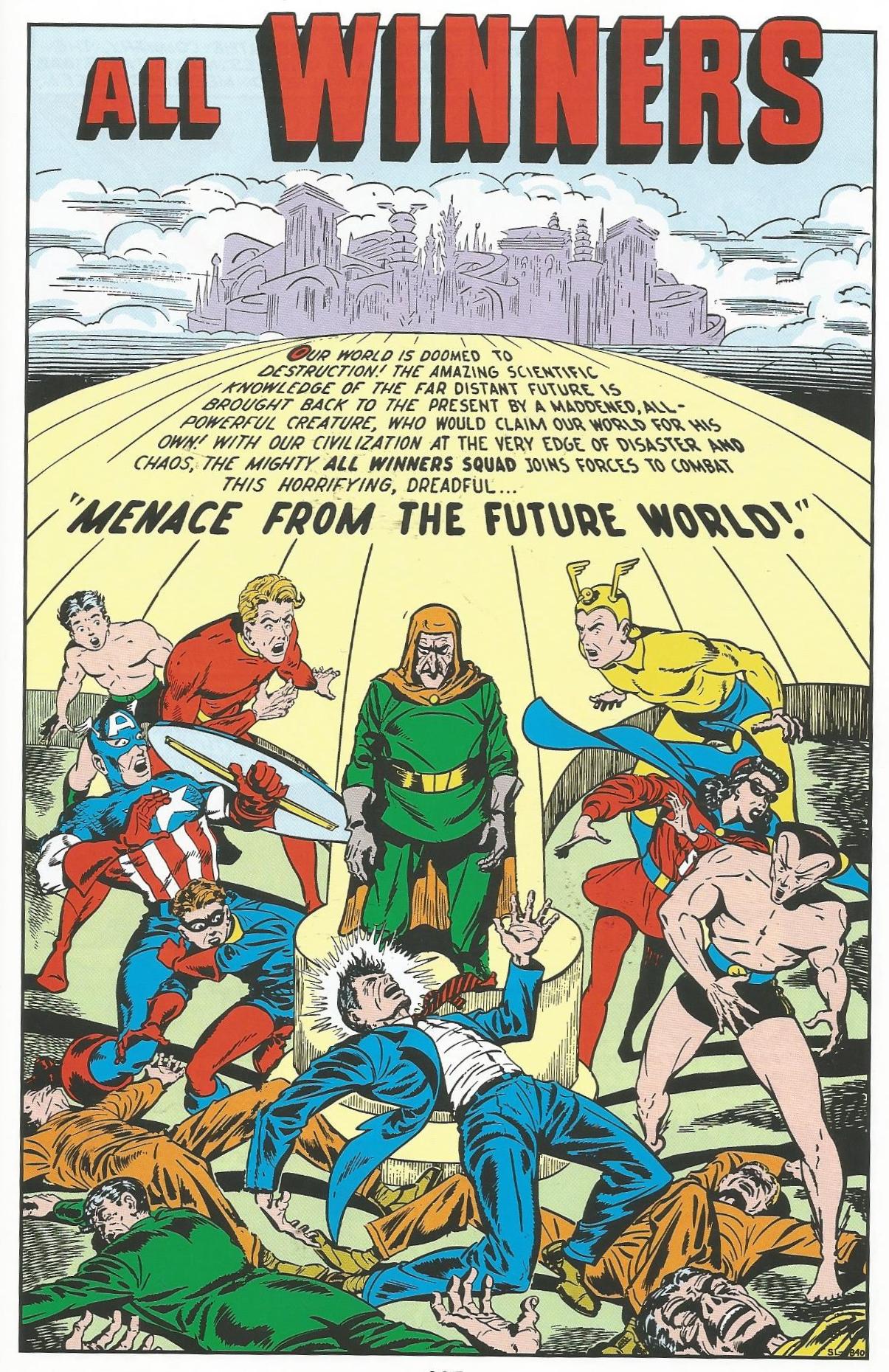 The final volume in the series, this reprints not only the end of All-Winners’ first series with issues 15-19 and 21 (there was never a 20), but also the one-off second series, meaning that the entire run of the title is now readily available for the inquisitive.

But is it worth it? Well, generally, yes. Ish.

The earlier issues in the collection generally follow the rather dismal pattern of Volume three: Captain America, Human Torch, Sub-Mariner, the Destroyer and the Whizzer in mundane adventures, drawn by fill-in artists, most of Timely’s top talent still returning from WWII. Without the Axis to battle, the super-heroes seem a little embarrassed, and the ordinary crooks outclassed. Skinnier issues, a result of continuing paper rationing, eliminate one of the strips intermittently.

However, the final three issues presented here are a treat. Back to full size, issue 19 presented Timely’s somewhat belated homage to to DC’s Justice Society of America – the All-Winners Squad! Following the precedent established by the JSA (though they were on the cusp of abandoning it at this point), the tale opens with a framing sequence bringing together Captain America, Human Torch, Namor the Sub-Mariner and the Whizzer, and has their ranks augmented by the lovely Miss America – inaccurately described by some as a “female Cap”, but in power levels and popularity more equivalent to DC’s Wonder Woman. The five adult adventurers, plus Toro and Bucky, are presented with a series of notes from Isbisa, a mastermind planning crimes based on the classical Ages of Man (Stone, Ice, Iron, etc.), and our heroes zip off to thwart the plan, but not before a misunderstanding causes Namor to storm off followed by a conciliatory Toro! And you thought heroes squabbling among themselves started with Fantastic Four 1… The Torch gets a new temporary assistant in the shape of lady cop Bobby Lee, so presumably he wasn’t complaining, and needless to say the individual menaces are vanquished and the gang reunite for a dramatic conclusion.

Issue 21 featured the ‘Menace From The Future World’, namely one super-scientific  Future Man, who teamed with contemporary villainess Madame Death to menace each continent of Earth in turn, with the All-Winners again following the divide/conquer/reunite pattern.

Both All-Winners adventures are rollicking good fun, with writers Bill Finger (19) and Otto Binder (21) turning out fast-paced and inventive stories. Yes, some of the individual menaces may have seemed implausible, there was a great deal of coincidence, and the base premise of the second story outright loopy, (no spoilers now – it’s only been seventy years!), but engage that old suspension of disbelief, and you’ll have a fun time. Opinions differ on who illustrated the two tales, but it’s generally agreed that Syd Shores had a unifying hand through most of the chapters.

Issue 21 concluded the first run of All-Winners Comics, but for unknown reasons, they tried again with a new 1 in 1948. The Timely Trinity of Cap, Torch, and Subby returned, but were joined by the Blonde Phantom, a non-superpowered adventuress who fought crime in a domino mask, high heels, and a floor-length, side-slit, low-cut, bare-bellied evening dress. By the time mousy secretary Louise Grant got all her Blonde Phantom gear on, you would expect a situation to either be all over, or out of control! The four stories are substantially improved in quality from the earlier series – Sub-Mariner is more realistically depicted, and the Human Torch is finally drawn with some vitality and flair – it also helps that he fights an actual super-villain, the (ahem) Gay Blade, who uses tricks such as skating on telephone lines and wielding  a knife-gun. Yep, a gun that shoots knives. It’s all good, fun stuff, but superheroics were on their last gasp, and with issue two the series became All-Western Winners, and moves beyond this review.

Besides Roy Thomas’ introduction, the only ‘extra’ this time is a reproduction of Ray Lago’s painted version of All-Winners 19’s cover, from a 1999 reprint.