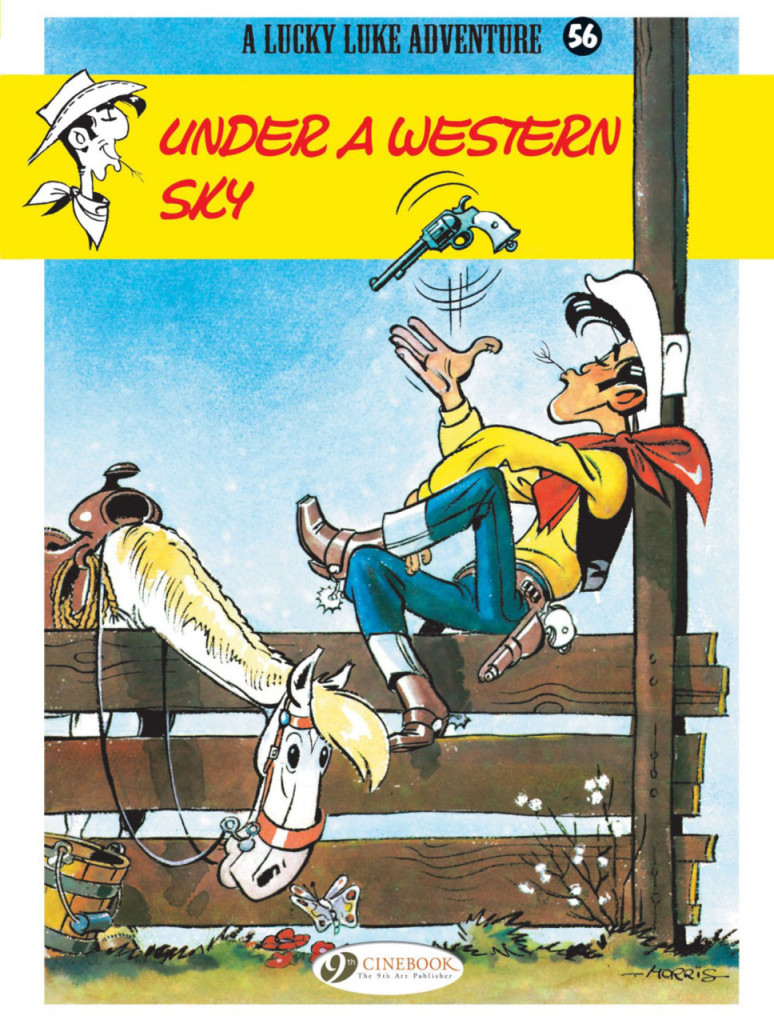 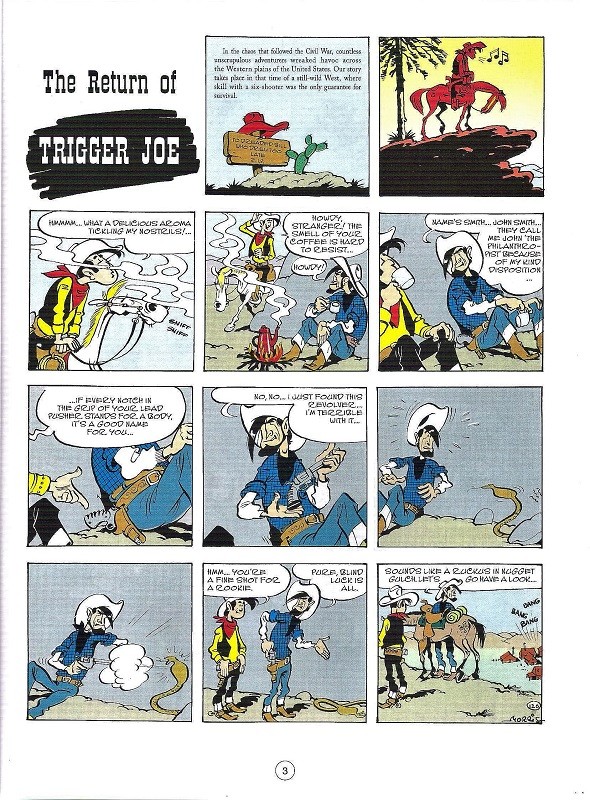 Under A Western Sky (Sous le ciel de l’Quest) is a collection of three Lucky Luke shorts written and illustrated by Morris (Maurice De Bevere), initially serialised in French magazine Spirou and collected in album format by publishers Dupuis in 1952.

In ‘The Return of Trigger Joe’ Luke has a series of encounters with a fellow who calls himself John “The Philanthropist” Smith on account of his kind disposition. Initially travelling together to the town of Nugget Gulch to enter a horse race, it eventually becomes apparent that The Philanthropist isn’t exactly all he makes out to be, less into the giving and more into the receiving, especially of things that don’t belong to him. ‘Round-Up Days’ has Luke joining the Bar Three Ranch as a cow-hand during round-up, but when the count reveals 200 head of cattle shorter than the previous year’s tally Luke suspects foul play and investigates. It’s one of the few Lucky Luke stories where he’s actually employed as a cowboy. ‘The Big Fight’ involves an encounter with gentle man-mountain Percival Belden who has been gifted with fists like sledge-hammers. Luke convinces Percival to enter a fight with professional travelling boxer Killer Kelly to win a hundred dollars, but when the town gets behind their local lad the bookie sees an opportunity to make a fortune.

Being among Morris’ earliest Lucky Luke stories, these lack some characteristics we now recognise as classic Luke traits, but still have a certain amount of charm to them. Luke isn’t the cool loner type yet, often coming a cropper. He is kind and respectful, especially to the racially stereotypical characters, his character and personality still forming. Jolly Jumper is intelligent, but still far from being the cheeky steed that often breaks the fourth wall with a knowing wink and twinkling eyes, the eyes really dark buttons of black. The character’s edges are still too round and overly cartoonish, but there are signs of things to come. Being serialised weekly, the colouring is inconsistent, one character in blue then wearing white only a few panels later, the backgrounds very simple, and we only get a glimpse of those amazing silhouettes on a stunning wash of colour that would later become a regular feature. Morris’ comedy is slapstick and the jokes play on old western tropes like fake signs, switched drinks and more akin to Blazing Saddles (though that came much later). There are some truly amusing moments that raise a chuckle though, and Morris is realising that Lucky Luke has the potential for some serious comedy mileage. While this is still early days and a few years from the Golden years of Lucky Luke with René Goscinny, Under a Western Sky is still fun to read and a good insight into the character’s history.

Under A Western Sky is actually the fourth album chronologically, preceded by Arizona and originally followed by Lucky Luke Versus Pat Poker. That is also found with these stories in volume two of Lucky Luke: The Complete Collection. Cinebook chronology puts Legends of the West next.