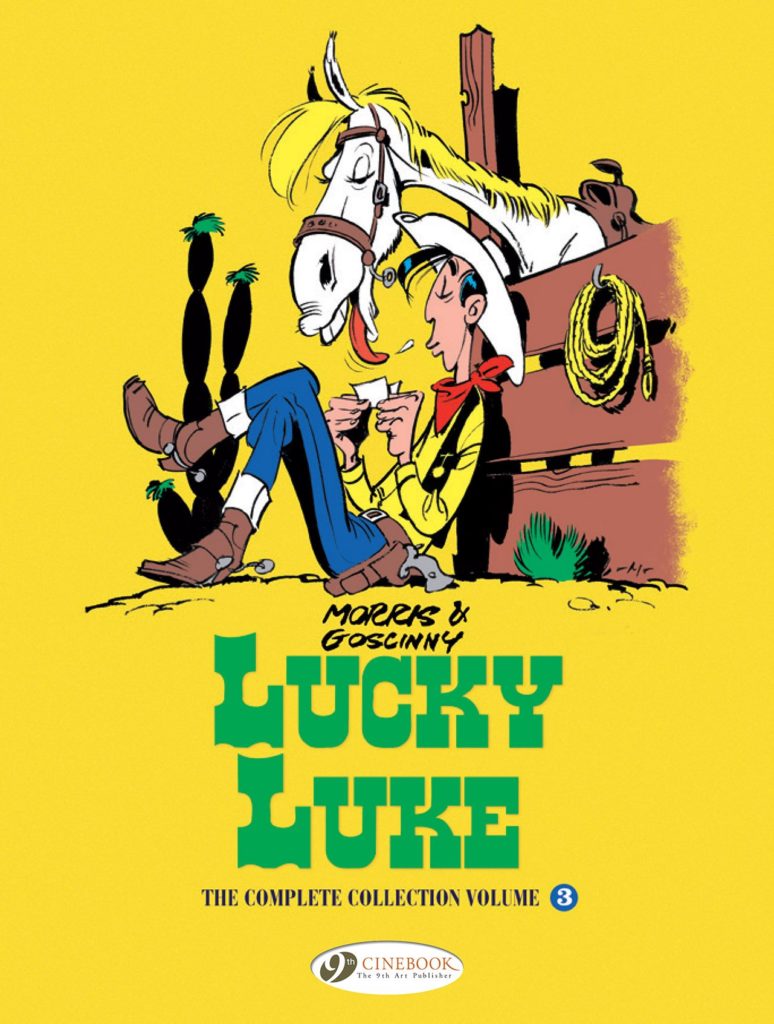 This third complete volume of Lucky Luke covers the years 1953-1956 and showcases a transition period for the strip. It presents two stories completely produced by Morris and the first collaboration with René Goscinny, forming the partnership that would take the series to new heights.

For all that, after the spirited introduction of the Daltons in Outlaws, reprinted in Volume 2, Doc Doxey’s Elixir is disappointing. It’s an episodic series of encounters with a Western standby, the medicine salesman making outrageous curative claims for their potions and moving on before people discover what they’ve bought has no effect. Morris is still stretching his gags way too thin, although here is where he introduces the first in a succession of horses with a taste for alcohol, that gag milked to good effect. The saving grace is the artwork, Luke now almost evolved to his final version, and the comedic visuals, Morris’ talent for character design very effective.

That’s even more apparent with regard to Luke’s next opponent Phil Wire, who is visually based on Jack Palance, as seen by Morris in Shane while living in New York, his name being a play on the French word for wire being ‘fil’. It’s an altogether more satisfying story, the running gags working well, the introduction of the first in a long succession of comedy undertakers, and Morris’ talent for cinema caricatures would be consistently well used. Back-up strip ‘The Pill’ is equally funny, if telegraphing the ending. It doesn’t necessarily fit the legend, but this is actually funnier than the first teaming of Goscinny and Morris that follows. Morris is also experimenting with the cartooning, which isn’t always successful, particularly a strangely out of scale saloon owner. The left hand sample page shows the influence of Morris’ time spent with New York creators, a Kurtzmanesque look to the bottom three panels. Christelle and Bertrand Pissavy-Yvernault’s informative period-setting introduction points out those panels also homage John Severin’s layouts for a Mad strip.

Rails on the Prairie is the first Goscinny/Morris collaboration, the story of how the two railway lines running East to West and West to East across the breadth of the USA were to meet in the middle. Goscinny researched the events well, the comedy stemming from the vast financial incentives offered by the US government per mile of track laid, resulting in conflict and sabotage. It’s not the finest of the Goscinny and Morris collaborations, indeed it’s possible to speculate that dissatisfaction later led to The Singing Wire practically re-running the plot to far funnier effect. This plot has a greater structure than Morris’ solo stories, but the gags still meander. What it did do was cement the way forward being complete stories tailored to the 44 page album format, that the final panel should always be Luke as the Lonesome Cowboy a long way from home, and the running gag of the town signs where Luke turns up.

A final solo Morris story awaits in Volume 4, along with his next two Lucky Luke tales produced with Goscinny.