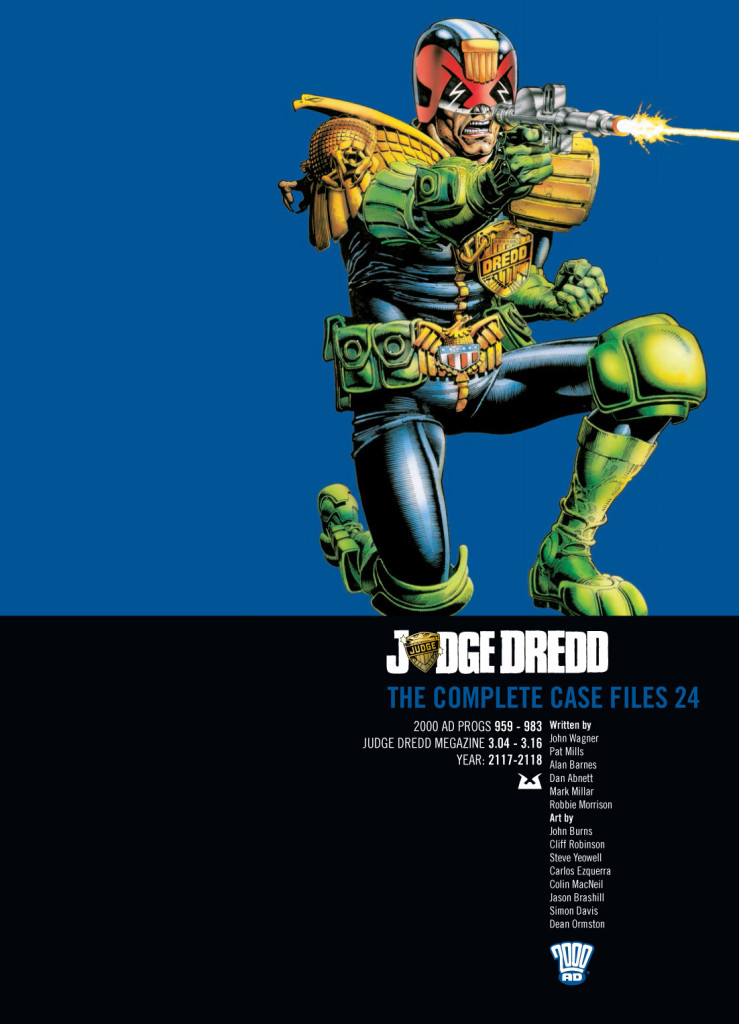 Case Files 24 kicks off in great style with ‘The Cal Files’, written by John Wagner and beautifully illustrated by John Burns. Packed with intrigue and clever plotting that demonstrates just how good a detective Dredd can be, this explores the political machinations within the Justice Department.

The next story, ‘Hammerstein’, is a Pat Mills-scripted four-part tale featuring one of the ABC Warriors. Jason Brashill’s art is nice, and the story’s perfectly serviceable, though neither Dredd nor Mega-City One feature until the end of what’s effectively an extended prologue.

Other content that originally saw print in 2000 AD is mostly forgettable, with ‘The Man Who Broke The Law’ by Mark Millar and Steve Yeowell perhaps the outstanding story, but for all the wrong reasons. Millar’s script is wordy in the extreme, and unconvincing in both its premise and execution, with Dredd barking out dialogue like a hero from an 1980’s Schwarzenegger movie (and not one of the good ones).

‘The Pit’, weighs in at fourteen parts, the longest sequence in the collection, and features three different artists in another Wagnerian epic. Dredd is sent in to clean up Sector House 301, the worst in the city, and tasks Judge Galen DeMarco with leading a team to investigate corruption within the Sector House. DeMarco would later get her own strip. The extended length allows for character development, and the story plays out like a futuristic version of The Wire, which is no bad thing. As for the artwork, Carlos Ezquerra’s is garish, Colin MacNeil’s is as good as ever (though not terribly well coloured) and Lee Sullivan’s is fairly stiff, though he would soon improve.

The Megazine section comprises of a pair of two-part stories alongside ten individual tales. The best of the bunch is ‘Killing Time’ by Wagner and Paul Marshall, which depicts Dredd trying to survive a whole day of forced inactivity: one of the many reforms introduced by Chief Judge Volt. It’s most amusing, and the type of tale that only Wagner seems capable of writing.

Sadly, quite a few Judge Dredd Megazine stories have artwork that wouldn’t look out of place in a  fanzine. The worst culprits are Tom Carney, Ashley Sanders, Marc Wigmore and Ray Bryant (who draws a story entirely in purple, for some bizarre reason), though their amateurish efforts are offset somewhat by the inclusion of some talented artists, including Dean Ormston, Simon Davis and the aforementioned Marshall. With the exception of these three, all the art in the Megazine section is pretty rough. Any publication that tries out new artists has to be applauded, but was this the best talent out there?

And it’s not just the art that’s not up-to-scratch in many of the Megazine stories. Writers Alan Barnes, Paul Neal, John Smith and others do little more than prove how good Wagner really is at getting across great ideas quickly, and writing a convincing Judge Dredd that’s consistent with the character’s personality over four decades.

The stories from 2000 AD are noticeably stronger, with ‘The Cal Files’ and ‘The Pit’ both great tales from the grittier, more realistic end of the spectrum. ‘The Cal Files’ appears in Hamlyn’s Judge Dredd: Blind Justice, and ‘The Pit’ is available in two eponymously-titled versions, one from 2000AD Books and an earlier publication from Hamlyn.