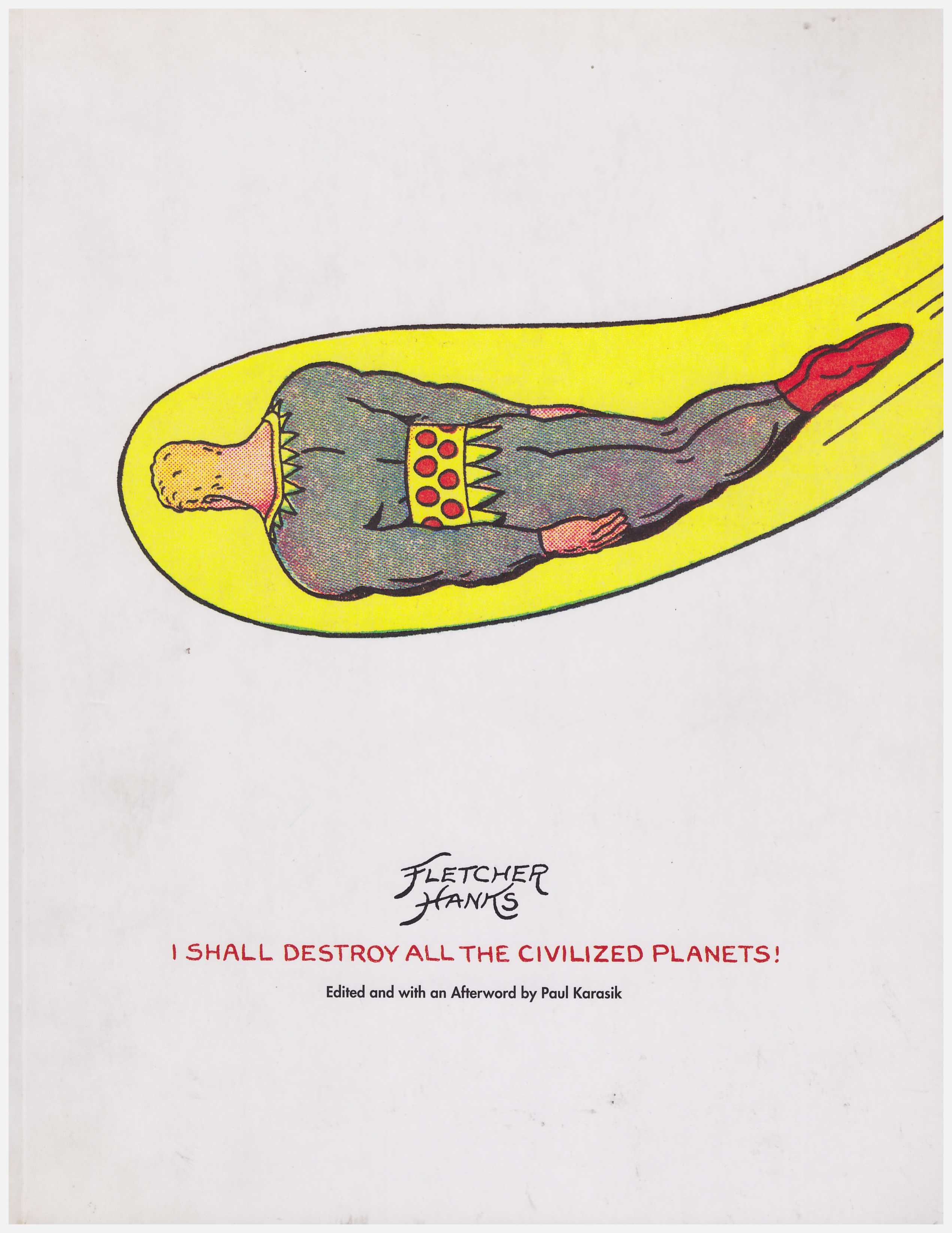 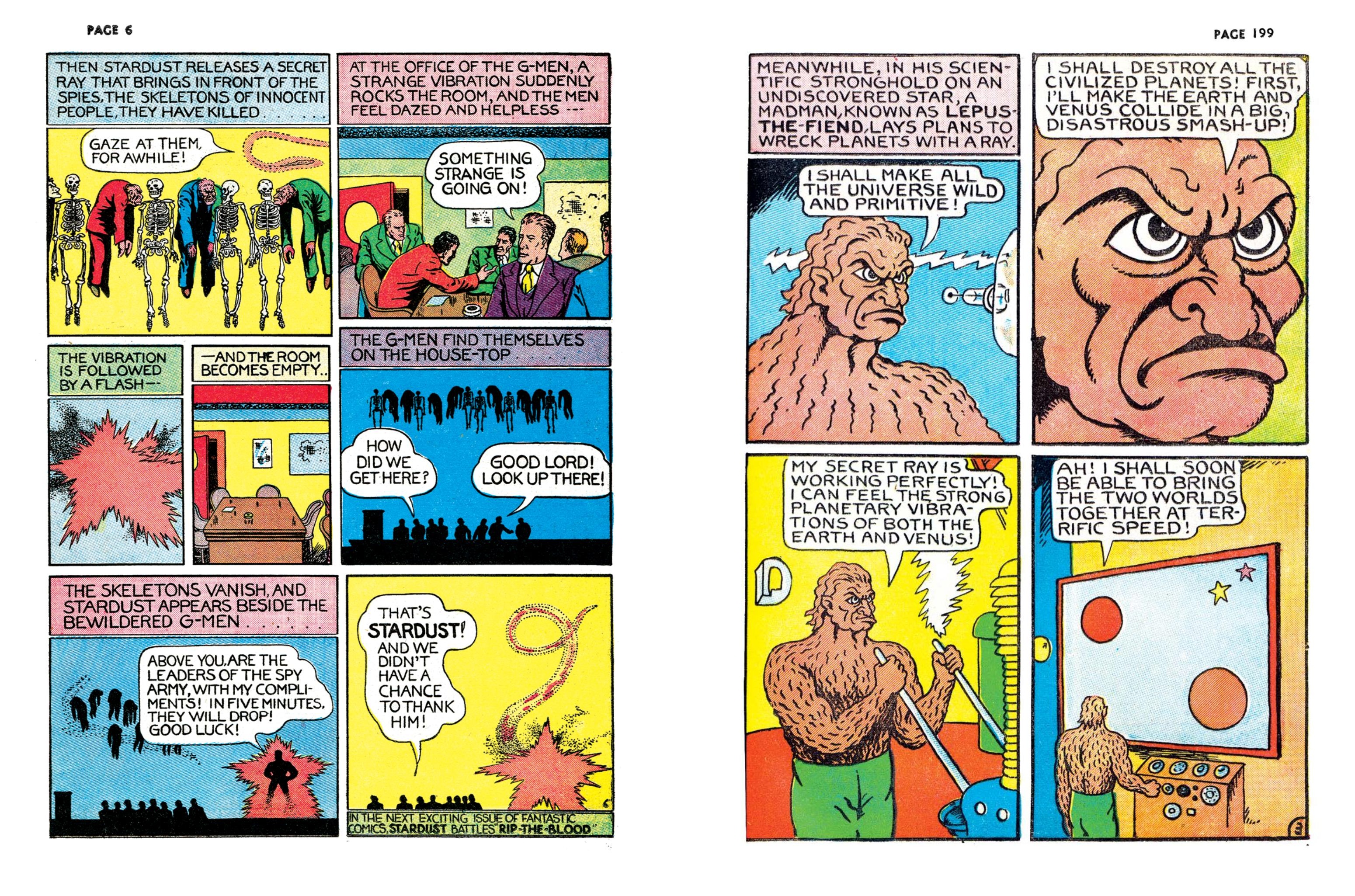 There’s a temptation to consider this book a gigantic hoax: the king’s new clothes, with false clues planted across the web constructing an obscure cartoonist whose crude, yet spirited style represents a sort of ur comic artist.

Fletcher Hanks worked in the earliest days of American comics, already aged over fifty, with his last known work seeing print in 1941, after which little is publicly known about him other than what’s been uncovered by the curator of this collection Paul Karasik.

The comics of the era demanded very little effort, and that’s what Hanks gave. The writing is wretched. Truly, truly wretched. Plots are formulaic, dialogue expository, characterisation absent and yet despite all that, a unique personality escapes and the cascade of mad ideas render the stories fascinating in car crash fashion. The answers to why packs of giant flaming disembodied hands are infesting the jungle will disappoint, yet there are so many bizarre offhand elements presented that most pages entertain. Stardust the Super Wizard has a crime detector so finely tuned it can detect a single crime about to be committed on Earth. Fantomah, mystery woman of the jungle, is “the most remarkable woman ever known”. Giant spiders fight elephants, and Big Red the lumberjack single-handedly sorts out an entire camp of rival loggers before quitting his job as there’s not enough action. His introductory caption described him as “loyal”.

The art is similarly rushed and primitive, but possessed of a feverish intensity and distinctive and disturbing characters. Evil-doers have prominent underbites, and heroes long heads and grotesquely muscled necks. Stardust in particular appears so musclebound you wonder he can move, yet sometimes a story element piques Hanks’ interest and he demonstrates talent. Golden lions leap gracefully across a valley, Fantomah is actually alluring, and an equivalent of Hokusai’s wave sweeps across the sea.

Hanks displays a demented sense of justice, and malefactors are imaginatively punished in ways that would make Michael Fleisher’s 1970s Spectre blanch. A criminal named Slant Eye is consumed by a giant golden octopus. De Structo’s disembodied, yet functioning, head is enveloped by a giant torso, and a group of spies are suspended staring into the hollows in the skulls of the innocents they’ve killed.

The most moving piece is by Karasik, searching for information about Hanks and discovering a man on a domestic level as appalling as the villains in his comics.

This is the comics equivalent of Outsider Music. It’s not so bad it’s good, but fascinates as the work of an utterly unique mind unfettered and engaged in myth creation in the days before genre clichés had developed.

The curation was enough to win this an Eisner Award for Best Archival Collection in 2008, and it proved successful enough to warrant a second collection of Hanks’ work, again titled after a line in one of his stories, You Shall Die by Your Own Evil Creation. You don’t, however, need both. However, if you want both, head straight for the hardback combination Turn Loose Death Rays and Kill Them All!